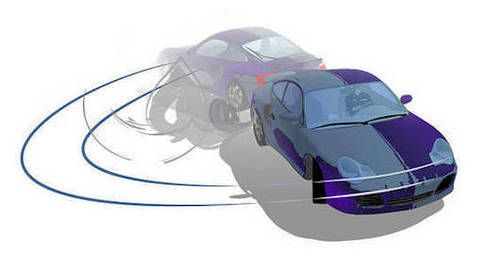 A J-turn is a driving maneuver used to spin a reversing vehicle 180°, to drive forward in the same direction.

The J-turn is also called "moonshiner's turn", based on the evasive driving tactics used by bootleggers, and a "reverse 180". A J-turn differs from a bootleg turn in that the vehicle begins in reverse gear. It is often performed by stunt drivers in film and television shows. It can be performed both on dry and snowy surfaces; the latter is preferred while learning the skill. It is a basic maneuver that leads into the K-turn, also known as the three-point turn, which is the opposite of the J-turn and is performed in a forward moving car.

The turn is achieved by transferring the momentum of the car by reversing quickly in a straight line then turning the wheel sharply while using the foot brake to lock the front wheels. The driver changes into a forward gear as the nose comes about.