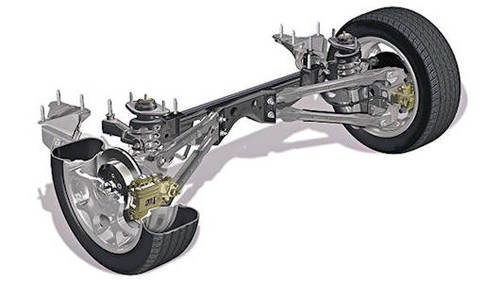 The motion ratio of a mechanism is the ratio of the displacement of the point of interest to that of another point.

This is described as the Installation Ratio in the reference. Motion Ratio is the more common term in the industry, but sometimes is used to mean the inverse of the above definition.

How to decide the motion ratio?

It basically depends on 3 factors

a)Bending Moment: To reduce the bending moment the strut point should be near to the wheel.

b)Suspension Stiffness: The suspension tends to get stiff when its inclination of the shock absorber to horizontal tends to 90 deg.

c)Half Shafts: In Rear suspension the wheel travel is constrained by the angle limitations of the universal joints of the half shafts. Design the motion ratio such that at maximum bounce and rebound shocks are the first components that bottom out by hitting bump stops.