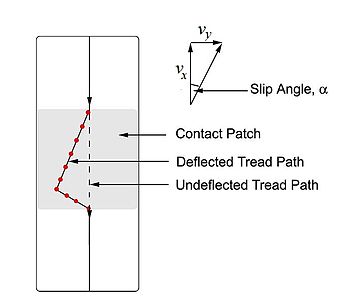 In vehicle dynamics, slip angle or sideslip angle is the angle between a rolling wheel's actual direction of travel and the direction towards which it is pointing (i.e., the angle of the vector sum of wheel forward velocity ux  and lateral velocity UY ).For a free-rolling wheel this slip angle results in a force parallel to the axle and the component of the force perpendicular to the wheel's direction of travel is the cornering force. This cornering force increases approximately linearly for the first few degrees of slip angle, then increases non-linearly to a maximum before beginning to decrease.

As the tread element moves through the contact patch it will be deflected further from the wheel mid-plane. This deflection gives rise to the slip angle, and to the cornering force. The rate at which the cornering force builds up is described by the relaxation length.

The ratios between the slip angles of the front and rear axles (a function of the slip angles of the front and rear tires respectively) will determine the vehicle's behavior in a given turn. If the ratio of front to rear slip angles is greater than 1:1, the vehicle will tend to understeer, while a ratio of less than 1:1 will produce oversteer. Actual instantaneous slip angles depend on many factors, including the condition of the road surface, but a vehicle's suspension can be designed to promote specific dynamic characteristics. A principal means of adjusting developed slip angles is to alter the relative roll couple (the rate at which weight transfers from the inside to the outside wheel in a turn) front to rear by varying the relative amount of front and rear lateral load transfer. This can be achieved by modifying the height of the roll centers, or by adjusting roll stiffness, either through suspension changes or the addition of an anti-roll bar.

There are two main ways to measure slip angle of a tire: on a vehicle as it moves, or on a dedicated testing device.

There are a number of devices which can be used to measure slip angle on a vehicle as it moves; some use optical methods, some use inertial methods, some GPS and some both GPS and inertial.