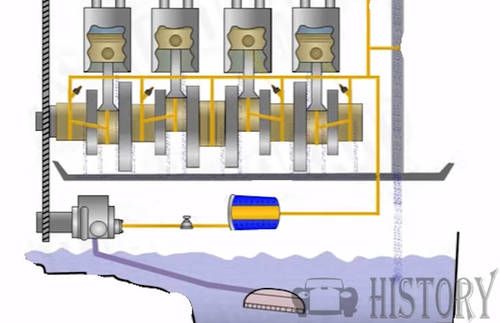 Windage is a force created on an object by friction when there is relative movement between air and the object.

There are two causes of windage:

Aerodynamic streamlining can be used to reduce windage.

In automotive parlance, windage refers to parasitic drag on the crankshaft caused by oil splashing out of the sump at high rpm. At 6,000 rpm, for example, the crankshaft must rotate 100 times per second. As the crankpins and counterweights rotate at such high speeds, they create a swirling cloud of air around them.

Windage is considered to occur when excess oil is caught up in this turbulent air, drawing energy from the engine to spin the oil mist. Windage may also inhibit the migration of oil into the sump and back to the oil pump, creating lubrication problems.

Some manufacturers and aftermarket vendors have developed special scrapers to remove excess oil from the counterweights, and windage screens to create a barrier between the crankshaft and oil sump.