Gräf & Stift was an Austrian manufacturer of automobiles, trucks, buses and trolleybuses, from 1897 to 1895 as Gräf  and up to 2001,as a subsidiary of MAN.

Gräf & Stift Founded in 1902 by the brothers Franz, Heinrich and Karl Gräf, and the investor, Wilhelm Stift. Before the Second World War, the company was a well-known manufacturer of luxury automobiles, By the 1930s Gräf & Stift had begun making trucks and buses, and it ceased car manufacturing in 1938. The company merged with Österreichische Automobil Fabriks-AG (ÖAF) in 1971, becoming ÖAF-Gräf & Stift AG, and later the same year was taken over by MAN AG. It continued in business as a subsidiary of MAN, and the Gräf & Stift name remained in use as a MAN brand for the Austrian market and for trolleybuses until 2001, when ÖAF-Gräf & Stift AG was renamed MAN Sonderfahrzeuge AG. It was located in Vienna, and the production facilities continue in use there, but no longer using the Gräf & Stift name.

Partnership with Willy Stift, The brothers also saw potential in the fledgling automobile, and commissioned Josef Kainz to design one. The result was an unusual voiturette with by a one-cylinder De Dion-Bouton engine fitted in front of the vehicle, powering the front axle, built in 1897, with only one copy ever made, even though the technology was eventually patented in 1900. However, the voiturette remained in regular use until 1914 and was in working condition yet at the dawn of the 1970s.In 1901, the brothers started cooperating with the Austrian businessman Wilhelm (Willy) Stift, an automobile importer who had already ventured into automobile manufacturing under the marque Celeritas. Celeritas automobiles were then assembled using French engines at the Gräf workshops, and in 1904 the gentlemen founded a joint company, named Gräf & Stift. Later, the company manufactured automobiles for the Spitz brand, owned by the automobile vendor Arnold Spitz. When Spitz went bankrupt in 1907, Gräf & Stift started building automobiles under their own brand.

The company concentrated on large, sophisticated and luxurious cars, which became popular with the Austrian aristocracy and even the Habsburg royal family. Apart from luxury cars, Gräf & Stift also became an important manufacturer of buses as well as tram bodies. 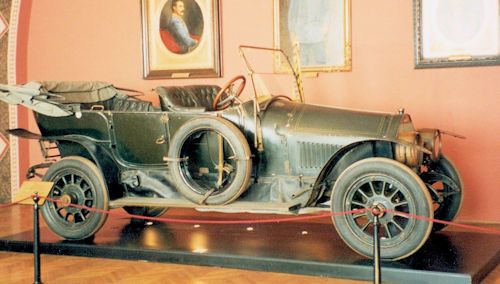 One of the Gräf & Stift luxury limousines, a Double Phaeton (engine no. 287), was bought by Count Franz von Harrach on 15 December 1910. Harrach's car was fitted with a four-cylinder engine delivering 32 PS. In 1914 in Sarajevo, the Archduke Franz Ferdinand of Austria and his wife rode together with Harrach in this car, when Gavrilo Principassassinated the Archduke. The assassination provoked a series of diplomatic manoeuvres that quickly led to declarations of war and the onset of the First World War.Main article: Assassination of Archduke Franz Ferdinand

To acquire necessary volume to assure the profitability of carmaking business, Gräf & Stift also launched smaller models, badged G 35, G 36 and G 8, powered by a 4.6-litre eight-cylinder engine. To cater for lower segments of the market, the company entered an agreement with Citroën, assembling one of the French automaker's models as the MF 6 in 1935-36 (it had a 2.65-litre six-cylinder engine, with Gräf & Stift having had ceased the manufacturing of their own six-cylinders in 1935). Later, a joint-venture was started with Ford of Cologne, which provided for eight-cylinder Ford-licensed vehicles, badged Gräf-Ford V8, to be assembled by Gräf & Stift.As the war broke out, Gräf & Stift started manufacturing trucks in order to meet wartime demand, which, together with buses and special vehicles, became the company's main business and enabled it to flourish in a rather difficult time. Manufacturing of passenger cars was resumed only in 1920, with a 2-litre intermediate-size model, Typ VK. The VKremained in production until 1928 (since 1926 as the modernized VK 2), but already in 1921 Gräf & Stift returned to making luxury cars, with a range of large six-cylinder models available through the 1920s and early 1930s. In 1930, the company presented its first eight-cylinder car, the sumptuous Typ Sp 8, in 1937 superseded by the Sp 9.

Neither of those ventures proved successful enough to assure the profitability of the passenger car business of Gräf & Stift, so the company decided to pull out of it. Its last own model was the rather modern C 12, fitted with a new twelve-cylinder engine, which was only made in very limited numbers in 1938, when the company ceased automobile production to concentrate on truck and bus manufacturing.

Gräf & Stift remained in the truck and bus manufacturing business after 1945, continuing as a family-owned enterprise, being run by members of the Gräf family. The company built its first trolleybuses in 1948.

As of 31 December 2000, ÖAF-Gräf & Stift AG had 897 employees, and its sales for the six-month period from 1 July 2000 through 31 December 2000 (the company's "Short Fiscal Year 2000") totalled €111 million.n 1971 the company merged with Österreichische Automobil Fabriks-AG (ÖAF) to form ÖAF-Gräf & Stift AG, which in turn was taken over by MAN AG the same year. ÖAF-Gräf & Stift AG continued manufacturing under that name, as a subsidiary of MAN. Still based in Vienna, it was focused on supplying trucks and buses for the Austrian market, mostly based on MAN designs, and additionally specialised in trolleybuses. It was MAN's main trolleybus producer in the 1980s and 1990s, and these were sold under the Gräf & Stift name, with trolleybuses being supplied to several European cities, including Salzburg, Solingen and Bergen (Norway), among others.

Use of the longstanding Gräf & Stift name ended in 2001, when MAN renamed the company MAN Sonderfahrzeuge AG, as part of reorganizations following its June 2001 acquisition of Neoplan. This in turn became MAN Nutzfahrzeuge Österreich AG in 2004. In that year, MAN built a new plant on Gräf & Stift's original site in the Liesing district of Vienna and continues to be the biggest employer in the area. 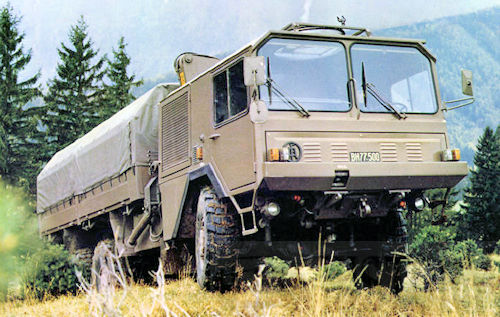