BMC ADO17 was the model code used by the British Motor Corporation (BMC) for a range of cars produced from September 1964 to 1975 and sold initially under its Austin marque as the Austin 1800. The car was also sold as the Morris 1800 and Wolseley 18/85, and later as the Austin 2200, Morris 2200 and Wolseley Six. In Denmark it was sold as the Morris Monaco. Colloquially known as the "Landcrab", the 1800 was voted Europe's Car of the Year for 1965 – the second year of the award, and a second successive contest win for the UK, the Rover P6 having won the award a year earlier.

The model proved a strong competitor in endurance rallying, finishing second in the 1968 London-Sydney Marathon and achieving three of the top 20 positions in the 1970 London to Mexico World Cup Rally.

It was developed at BMC as the large-car follow-up to the successful Mini and Austin 1100 under the ADO17 codename. Additional badge-engineered Morris 1800 and Wolseley 18/85 variants were launched, in 1966 and 1967, catering for BMC dealerships selling these marques, and their loyal customers. The 18/85 name had previously been used on the Wolseley 18/85 of 1938 to 1948

The car was unconventional in its appearance in 1964, with its large glasshouse and spacious, minimalist interior including leather, wood, and chrome features plus an unusual instrument display with ribbon speedometer and green indicator light on the end of the indicator stalk. There was a chrome "umbrella handle" handbrake under the dashboard parcel shelf, and the two front seats met in the middle and could be used, on occasion, as a bench seat. Both Alec Issigonis and Pininfarina worked on its exterior. The technology "under the skin" was also unconventional and ahead of its time, including Hydrolastic suspension and an example of inertia-controlled brake proportioning, in the form of a valve which transferred braking force between front and rear axles as a function of sensed deceleration rather than as a function of fluid pressure. The bodyshell was exceptionally stiff with a torsional rigidity of 18032 Nm/degree, this was greater structural rigidity than many modern cars up to the end of the century.

Progressive improvement was a feature of most cars in this period, but the number and nature of the changes affecting the early years of the Austin 1800 looked to some as though the car had been introduced without sufficient development work. A month after its launch, in December 1964, reclining front seats and the option of an arm rest in the middle of the back seat were added to the specification schedule. A month later, in January 1965, the final drive ratio reverted to the 3.88:1 value used in the prototype, from the 4.2:1 ratio applied at launch: this was described as a response to "oil-consumption problems": January 1965 also saw the indicator switch modified. At the same time, higher gearing and reduced valve clearances cut the published power output by 2 bhp but cured the "valve-crash" reported by some buyers when approaching top speed on one of Britain's recently constructed motorways. The manufacturer quietly replaced the "flexible, flat-section dipstick" which, it was said, had caused inattentive owners to overfill the sump after inserting the dipstick back to front so that the word "Oil" could not be seen on it. Subsequent modifications included changing, repositioning and re-angling, the handbrake in October 1965,removing the rear anti-roll bar and rearranging the rear suspension at the end of 1965, at the same time adjusting the steering to address a problem of tire scuffing, and fitting stronger engine side covers in January 1966 along with modified engine-mounting rubbers which now were "resistant to de-bonding". February 1965 saw water shields fitted to the rear hubs and the car's steering rattle cured by the judicious fitting of a spacer, while the propensity of early cars to jump out of first and second gears was addressed by the fitting of a "synchronizer".Further improvements followed the launch of the Morris 1800 early in 1966. Gear cables were revamped to deal with "difficult engagement" of first and third gears in cold weather, and the seat mountings were adapted to increase rake in May 1966.

In June 1967, without any fanfare of press releases, a modified version of the 1800 started turning up in domestic market show rooms with repositioned heater controls, a strip of 'walnut veneer' on the fascia and separate bucket seats replacing the former split bench seat at the front. Various other criticisms seem to have been quietly addressed at the same time, including the announcement of more highly geared steering which now needed only 3.75 rather than 4.2 turns between locks, although the actual modification had applied to cars produced since September 1966 (and, in the case of Australian cars, some time before that). This was also the point at which the car received a differently calibrated dipstick, giving rise to rumours that engine problems on some of the early models had resulted from nothing more complicated than the wrong calibration of the dipstick causing the cars to run with the wrong level of engine oil; the manufacturers insisted that the "recalibration" of the dipstick was one of several (unspecified) modifications, and urged owners not to use the new dipsticks with older engines. 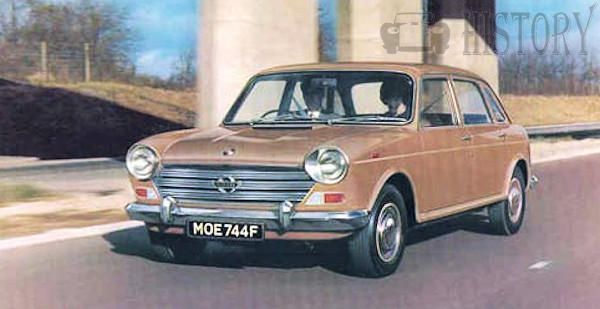 In May 1968 a Mark II version was launched. This featured a cheaper and more conventional interior, revised front grilles and other trim, and for the Austin and Morris models the slim, horizontal rear lights were replaced by vertical "fin" lights which gave a family look along with the smaller ADO16 range. The Wolseley retained its unique rear lights. Other changes included a higher second gear and final drive ratio for the manual transmission, and conventional suspension bushes replaced the far superior roller bearings fitted to the Mark I. The compression ratio was increased and maximum power output boosted by 5 bhp to a claimed 86 bhp. The Mark II also had larger wheels

In 1969, the sills and doors from the 1800 (with Mark II exterior handles) were used on the bodyshell of the otherwise new Austin Maxi, apart from that both models have little interchange ability. 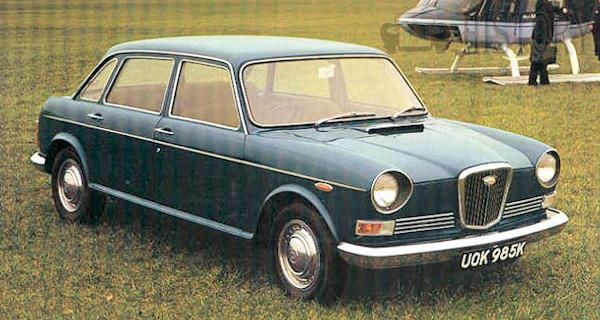 Further, less dramatic modifications heralded a Mark III version in 1972. This had another change to the front grille (now a shared style for the Austin and Morris) and interior improvements, including a conventional floor-mounted handbrake.At this point six-cylinder versions were introduced – the Austin 2200, Morris 2200 and Wolseley Six. While 1800 versions of the Austin and Morris were continued, the Wolseley 18/85 was dropped.

By 1966 Australia was described as BMC's leading world market. The 1800 was introduced in Australia in November 1965as the Austin 1800, with a Mark II version being introduced in 1968. Australian-produced vehicles started out with a claimed local content of 65–70% along with an undertaking from the manufacturers to raise the level to 95% in line with government requirements by the end of 1968. Initially the cars were generally identical to their British contemporaries, however the local production was quickly modified to suit the harsher roads and climate of Australia. Modifications to the British Mark I design included raised suspension trim height, the provision of a large, heavy sump guard and better sealing against dust. The Australian Mark II was notable in retaining the lower final drive ratio of the Mark I's manual transmission (but not the lower second gear), and, with the exception of the initial production run, was fitted with a dual-circuit hydraulic braking system manufactured locally by Paton's Brake Replacements (PBR) Pty. Ltd. Despite offering the safety of a dual-circuit system, it was generally held to be inferior in performance to the earlier Girling equipment. The Australian Mark II was also originally fitted with an alternator manufactured locally by Electricity Meter & Allied Industries Limited (EMAIL), a company better known for its kilowatt-hour meters and household appliances. In the event of failure, most EMAIL alternators were replaced by Australian-made Lucas units.

A version unique to Australia was the Austin 1800 Utility, a coupe utility produced from 1968 to 1971. Over 2,000 examples were built. The Utility was released near the end of the first series in July 1968 and most of the examples produced were therefore Mk IIs.

Per capita, the Australian model sold better than anywhere else in the world. Ironically, it represented the tail-end of popularity of British-designed cars in Australia. In the Australian market, it offered a roomy and advanced 4-cylinder alternative to the popular 6-cylinder models such as the Holden Kingswood, which used conventional engineering based on American principles. Some versions badged Freeway (a name previously used for a six-cylinder Farina model down under) were exported to New Zealand, which also assembled UK-made Austin and Morris 1800s in separate plants.

In 1971, the Australian subsidiary of BL replaced the 1800 with the facelifted "X6" models known as Austin Tasman and Austin Kimberley. These featured new front and rear styling and a 2.2-litre 6-cylinder E series OHC engine (the first front wheel drive car with a transversely mounted six cylinder engine), as well as an updated interior. The X6 series was intended to compete more effectively with the Australian-made rear-wheel drive six-cylinder family cars of Holden, Ford and Chrysler. These cars were also offered in New Zealand as Morris models and many were assembled there. The Australian-developed 2.6 E6 was also used in UK-built 2200 models. Despite technical superiority, the X6 was commercially inferior, being superseded by the Leyland P76 in 1973.

As a one-off prototype, an Australian 1800 Mark II body was fitted with the 4.4-litre V8 and modified three-speed automatic transmission of the P76 in the BLMC (Australia) Victoria Park works at Zetland, New South Wales. This vehicle was reportedly shipped to British Leyland in the UK and never seen again.

The range 2.2-litre straight-six engine used in the Australian "X6" cars eventually made it into the British ADO17s (Austin Drawing Office) in 1972; the British 6-cylinder models were known as the Austin 2200, Morris 2200 and Wolseley Six.

The ubiquitous doors even appeared on the further upmarket Austin 3-Litre of 1968 and, at prototype stage, Bentleys and Rolls-Royces.

The 1800 and 2200 were not strong sales successes. While they were technically interesting, and offered a roomy interior and comfortable ride, they struggled to find a place in the market. The packaging expertise that seemed a miracle in the Austin Mini and Austin 1100, was much less relevant in a larger car, so that the car seemed to be "between sizes", oversized and not a direct competitor for the market slot it was aimed at. In modern terms, it is the same external size as a Mark 1 Ford Focus, but has the interior space of a Mondeo. The driving position was also a little too "bus like" for some. Issigonis' refusal to acknowledge consumer interest in something more stylish and less eccentric cost the car dearly in sales, and it never achieved the volumes planned for it.

Some 386,000 examples of all variants were produced in just over a decade, with the Austin-badged versions being the most common; some 221,000 units were produced. There were 95,271 Morris 1800 and 35,597 Wolseley 18/85produced in the UK. Relatively few have survived outside the hands of enthusiasts owing to its original unfashionable image, and more recently, its popularity in the demolition derby and banger racing scenes, owing to the bodyshell's exceptional strength and rigidity.

In early 1975, all three models were replaced by the wedge-shaped ADO71, or 18–22 series, which bore the Austin and Morris (1800 and 2200) names, while the Wolseley variant had no official model name save for being marketed as "the Wolseley saloon". From late 1975 all ADO71 models were marketed under the Princess name, and the Wolseley name disappeared.