The Austin Sixteen was the first 'new' car to be produced by the Austin Motor Company following the Second World War. Apart from the name, it shared nothing with the pre war Austin Sixteen.

Whilst it used a brand new 4-cylinder 2199 cc, overhead-valve engine—the first to be used in an Austin car, it in fact used the chassis and body of the pre-war Austin 12, which continued to be produced, alongside the other pre-war saloons the 8 hp and the 10 hp. The number Sixteen was not a true reflection of the power of the vehicle but the result of a calculation to determine the excise duty (road tax) payable for the vehicle. The engine in fact produced 67 bhp (50 kW) at 3800 rpm. The car shared a number of features with the famed London Taxi, one of which was the built-in hydraulic jacking system operated from a pump located under the bonnet. 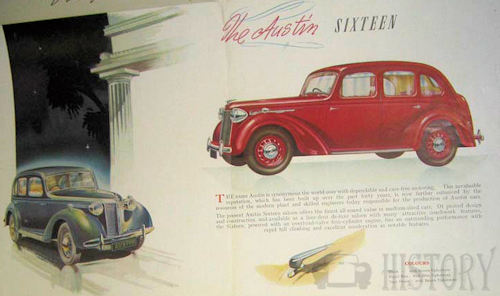 The Sixteen had a healthy turn of speed for its day with a maximum quoted speed of 75 mph (121 km/h). In the bitterly cold winter of 1947 Alan Hess and a team of drivers with 3 Austin Sixteen vehicles undertook a publicity run on behalf of the Austin Motor Company to visit seven Northern European Capitals in seven days. Despite extraordinary travel difficulties caused by heavy snow, the vehicles completed the adventure successfully, and the story is related in Alan Hess's book, Gullible's Travels.

Steering was by a cam and lever system which provided a dual ratio to ease parking. Suspension was all elliptic (overslung in front, underslung at the rear) with rigid beam axles all controlled by Luvax-Girling double acting hydraulic shock absorbers—a transverse torsion bar linking both pairs. Brakes by Girling were mechanical using a wedge and roller system in 11 inch drums with twin leading shoes in the front drums. 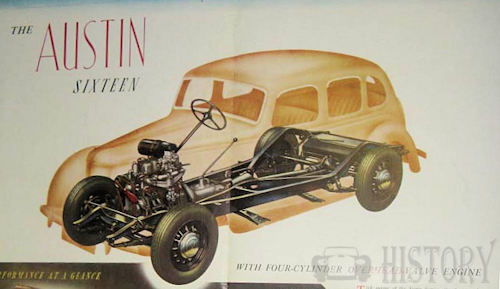