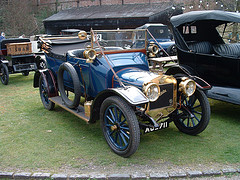 The Austin 15 hp was a motor car manufactured by the British Austin Motor Company, sold between 1908 and 1915.

A revised 15 hp model was introduced in 1911, losing the monobloc design, but with an increased stroke of 4.5 inches (110 mm), 2838 cc, side-valve T-head engine design,and was actually rated at 19.6 hp. Austin manufactured 688 of these more powerful models. It had a four-speed gearbox with cone clutch, shaft and bevel-drive back axle. Suspension was provided by semi-elliptic leaf springs at the front and Austin-patent full-elliptic leaf springs at the rear. Brakes were by rear wheel drum and transmission brakes. The wheels were wooden artillery style wheels with Michelin detachable rims, 815 x 105 beaded-edge tyres. In 1913, a powered chassis with tyres was available for £350.

As with many Austins of the period it was available in a wide range of bodies, including a two-seater "Harrogate" (with single rear dicky seat), a two-seater "Ascot", a four-seater "Westminister Landaulet" or "Levee Single Landaulet" and a snub-nose "Town Carriage" with an open driver and closed passenger layout. A four-seat open tourer was only available until 1910