The Austin A30 is a compact economy car launched at the 1951 Earls Court Motor Show, London by the Austin Motor Company and produced by the newly formed British Motor Corporation from May 1952 to September 1956. Introduced as the "New Austin Seven", it was Austin's answer to the Morris Minor.

Though Austin had previously contracted the American industrial designer, Raymond Loewy in the task, the designs of Holden 'Bob' Koto were discarded and the car we know was eventually styled in-house by Ricardo 'Dick' Burzi.

The body structure was designed by T.K. Garrett, who had been an aeronautical engineer before joining Austin, was of fully stressed monocoque chassis-less construction, which made it both lighter and stiffer than most contemporary vehicles. It was the first Austin to be made in this way. Inside there were individual seats at the front and a bench at the rear covered in PVC with an option of leather facings on the seats. Evidence of economy was seen in only having a single windscreen wiper, central combined stop/tail/numberplate lamp and a sun visor in front of the driver only. A passenger side wiper and sun visor, and a heater were available as optional extras.

Originally only offered as a 4-door saloon, 2-door variants were introduced in late 1953, and in 1954 a van and van-based "countryman" estate were made available. Despite having a smaller loading capacity than the equivalent BMC O-type Minor based vans (60 cu ft / 1.70 m3 as opposed to 76 cu ft / 2.15 m3) the Austin van offered the same payload. Being slightly lighter and stiffer, it was favoured by businessmen, and saw long service for many.

The A30 had a smaller rear window than the A35 and trafficators instead of modern indicators, which popped out from the B pillar when operated by a knob mounted on the centre of the dashboard.

The car was quite successful in 1950s saloon car racing and some still appear in historic events.

The car's newly designed A-Series straight-4 engine was state of the art for the time and returned an average fuel consumption of 42 mpg / under 7L/100 km. With spirited driving the A30 was able to attain a top speed of 70 mph (110 km/h) (factory quoted). In their road test The Motor magazine achieved a top speed of 67.2 mph (108.1 km/h) and a 0–60 mph time of 42.3 seconds. Braking was effected by a hybrid system, with Lockheed fully hydraulic drum brakes at the front and a body mounted single cylinder operating rods to the wheels at the rear, which despite being heavily criticised as being archaic and old-fashioned, were reported as being quite acceptable. The rod system provided good handbrake efficiency and was applied by a lever in an unorthodox position to the right of the drivers seat (Right hand drive vehicles). Bumps were handled by independent coil springs at the front end and beam axle/semi-elliptic leaf springs at the back.

A car tested by The Motor magazine in 1952 had a top speed of 62 mph (100 km/h) and could accelerate from 0–50 mph (80 km/h) in 29 seconds. A fuel consumption of 38.8 miles per imperial gallon (7.28 L/100 km; 32.3 mpg-US) was recorded. The test car cost £553 including taxes. The optional radio was an extra £43 and the heater £9. Performance data need to be seen in the context of fuel availability. Early in the Second World War "branded fuel" disappeared from sale in the UK, and the nationally available fuel available at the beginning of 1952 had an octane rating of just 70, which enforced relatively low compression ratios: this reduced the performance available from all cars, especially small ones. In 1952 branded fuels returned to the forecourts, available octane ratings began to increase, and compression ratios were progressively improved along with the performance figures of cars such as the Austin A30 and its A35 successor. 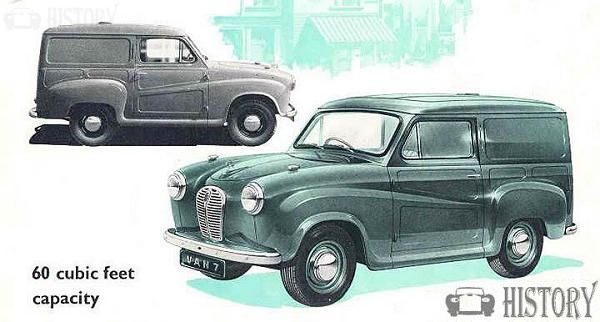