As naturally aspirated engines are five-cylinder engines with 2.1 liter displacement and 100 kW (136 hp), 2.2 liter displacement and 101 kW (137 hp) and finally a 2.3 liter with 100 kW (136 hp) to choose from. All other engines are 5.1-liter and 2.2-liter five-cylinder turbocharged engines with outputs between 121 and 162 kW.The Audi 100 Type 44 was more aerodynamically shaped with a coefficient of drag (C w ) of 0.30 than most other vehicles of the time. New problems such as "interior heating" due to the slanting windows were first brought up for discussion and discussed publicly.

However, the Audi 200 did not reach the drag coefficient of the Audi 100 because of the modified attachments. It was measured despite its identical body with a C w value of 0.33.On request, the Audi 200 was initially in a "government version" with the well-known from the Audi 100 98/100 kW five-cylinder gasoline engine.Over a short period (from 1988 to 1990), more powerful engines were offered, producing 140 kW (only automatic, engine code 2B) and 147 kW (engine code 1B).

Both front and four-wheel drive cars featured manual five-speed gearboxes, and the three-speed automatic transmission was only available in combination with front-wheel drive.

While the Audi 100 was subdivided into equipment classes until the revision at the beginning of 1988 (basic model without black trim between the taillights in the area of ​​the license plate, CC, CS (sporty) and CD), the Audi 200 was initially only available with the most expensive equipment. Later there was the special edition 200 Exclusiv with flared wheel arches and an even more extensive equipment, including electrically adjustable leather seats and an automatic climate control. Until the introduction of the Audi V8, the 200 was the most expensive in series built Audi. The Audi 200 exclusiv cost 1987 79,000 DM.

The front of the Audi 200 Type 44 is upgraded compared to the Audi 100 with wider dual headlights, standard fog lights, a large front spoiler in body color and a different bonnet. The front turn signals are like in the previous model 200 type 43 embedded in the bumper. The aperture between the taillights is continuous and in the colors of the taillights.

The Audi 200 had a different interior to the facelift in early 1988 as the Audi 100 with a different dashboard, special door panels and elaborate upholstered seats.

In early 1988, the Audi 200 and 100 got a visually and ergonomically substantially better interior. In addition, in the last year of production important safety features such as a driver's airbag available at extra cost.

In the Audi 200 Type 44, the quattro permanent four-wheel drive was also offered for the first time in conjunction with manual transmissions in this series .

From March 1989, the top model of the series was the Audi 200 quattro 20V with a turbocharged 2.2-liter five-cylinder enginewith four valves per cylinder (engine code 3B) based on the engine of the Audi Quattro . The power of 162 kW (220 hp) ensures a top speed of 242 km / h (estate variant 238 km / h) and an acceleration from 0 to 100 km / h in 6.6 seconds (combination variant 6.7 seconds ). The Audi 200 in this engine variant (factory specifications so that was one of the fastest production sedans of that time ).

The Audi 200 quattro Trans-Am , based on the Audi 200 C3, was Audi's first circuit racing racecar since the 1930s.In China, the Audi 200 L (a long version especially for the Chinese market) was only available from the FAW-Volkswagen from February 1996. Production of the model was discontinued in the summer of 1999.

It was initially offered only with a V8 engine with 3.6-liter displacement and a power of 184 kW (250 hp), the Quattro all-wheel drive and an automatic transmission, but he did not reach the performance of the Audi 200 Quattro 20V.

The differences to the Audi 100 on the body of the Audi V8 were greater than on the Audi 200. These include u. a. a completely redesigned front, a chassis with a wider track, further issued wheel arches and modified bumpers. The rear doors as well as the sidebars differed from the Audi 200 and the instrument cluster.

Audi wanted to market the V8 as an independent luxury-class vehicle, but this could not defend itself against the Mercedes-Benz S-Class or the BMW 7 Series, because he was still perceived as Audi 100 despite the differences mentioned. The sales figures fell far short of expectations despite expensive advertising measures. Mid-1994, the production of the V8 ran out. The V8 was replaced by the completely new and independent and much larger designed model Audi A8 . 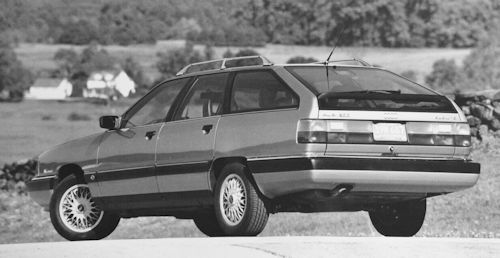