The Audi R18 is a Le Mans Prototype (LMP) racing car constructed by the German car manufacturer Audi AG. It is the successor to the Audi R15 TDI. Like its predecessor, the R18 uses a TDI turbocharged diesel engine but with a reduced capacity of 3.7 litres and in a V6 configuration. For the first time since the 1999 R8C, Audi's Le Mans prototype uses a closed cockpit design. The R18 is also the first racing car from Audi to feature hybrid power.

As per the new rules for Le Mans in 2011 the car features a stabilisation fin on the engine cover and has a new six-speed gearbox. The new gearbox is electrically controlled instead of pneumatically controlled, saving weight by eliminating the pneumatic system. Despite the capacity reduction, the 3.7L V6 is claimed to develop more than 397 kilowatts (532 bhp) of power. This is less than the outgoing R15, but the V6 engine's fuel consumption will more than likely be lower than that of the outgoing V10 engine on the R15. The new engine has a single Garrett (Honeywell Turbo Technologies) TR30R VGT turbocharger, as opposed to the twin TR30R configuration of both the Peugeot 908 HDi FAP and the previous Audi R15 TDI. The R18's V6 engine exhausts inwards between the cylinder banks, where the turbocharger is placed. This is called a 'hot side inside' configuration and is opposed to the traditional configuration with each cylinder bank of a V engine exhausting outwards to their respective turbochargers.

Unlike other coupé competitors in its class, the chassis on the R18 is not composed of two halves but rather is of single-piece construction for improved rigidity. The R18 has an engine cooling duct above the cockpit roof as well as redesigned rear wheel arches to channel more air to the rear wing. Like the Acura ARX-02a, Audi has chosen to install taller and wider tyres at the front for increased contact patch. Further changes include a lower rear wing, aluminium splitters and a small duct on the front of the car for improved driver comfort within the cockpit. The 2011 ACO regulations have limited the R18's fuel tank to 65 litres.

The R18 e-tron quattro is a hybrid version of the R18 ultra, with a 500 kJ flywheel accumulator system designed by Williams Hybrid Power, two 101 PS (74 kW; 100 hp) Bosch Motor Generator Units driving the front wheels with water-cooled integrated power electronics, providing the car with four (quattro) wheel drive, and a smaller 58-litre fuel tank. The quattro system, as per the regulations, is available only at speeds above 120 km/h (75 mph).

The e-tron has six automatic modes that are driver selectable on the steering wheel. The modes manage engine mapping, short bursts accelerating from corners, quattro four wheel drive, wet weather, etc. Allan McNish said "I don't have to press a button ... It does it automatically ... It is like traction control."

Changes from 2013 R18 e-tron quattro include the introduction of blue laser beam backlights with a yellow phosphor crystal lens complementing the LED headlights, a revised V6 TDI engine with an electric turbocharger, upgrades to the flywheel accumulator system and an exhaust heat recovery system. The system captures the thermal energy from the exhaust and can add power to either the turbocharger or the flywheel accumulator system. Audi later opted not to race with the second Energy Retrieval System, which is known as a Motor Generator Unit-Heat [MGU-H] in F1. The aerodynamics have been heavily revised in accordance with the new rules: the width is reduced by 10 cm, the height is increased by 20 mm and there is a new set of front wings. However, the exhaust-blown diffuser on the 2013 model has been banned and removed. The safety monocoque has been strengthened with additional fabric. Wheel tethers and extra crash structures are also added to the car. Finally, there are numerous smaller upgrades to vision and ergonomics to improve drivability.

The R18 TDI, which was unveiled at a launch in Ingolstadt on 10 December 2010, has made its race debut at the 1000 km Spa round of the Intercontinental Le Mans Cup in May, finishing 3rd. It was scheduled to be raced at Le Mans 24-hour, the Imola 6 Hours, Silverstone 6 Hours, Petit Le Mans, and China 6 Hour races later in the year.

Due to developmental and logistic reasons the R18 did not enter the 2011 12 Hours of Sebring. Instead, Audi opted for two Audi R15 Plus models, which ran in the 2010 configuration with balance of performance adjustments; the two cars finished 4th and 5th, behind an Oreca 2010-spec Peugeot 908 HDi FAP, a Highcroft Racing HPD ARX-01e and a factory Peugeot Sport 2011-spec 908. However, two evolved R18s (chassis numbers 101 and 102) were put to the test during the four days of testing in Sebring, together with an R15 TDI as a reference vehicle, after the 12-hour race.

In the 2011 24 Hours of Le Mans, Allan McNish (car #3) and Mike Rockenfeller's (#1) cars were involved in heavy high speed collisions with slower Ferraris. Both drivers could leave their car without serious injuries despite both cars being completely destroyed. However the remaining Audi R18 (#2 of Marcel Fässler, André Lotterer and Benoît Tréluyer) went on to win the race by 13.854 seconds. This was the 11th win in the past 13 years for Audi.

Audi competed in the FIA World Endurance Championship (WEC). For the 2012 12 Hours of Sebring, they entered three 2011 R18s; the #2 of McNish, Tom Kristensen and Rinaldo Capello took the overall victory with 325 laps completed, marking Audi's tenth victory at Sebring. The victory also marked Kristensen's sixth Sebring win, and as a three-driver team, the third (2006 and 2009). The #3 car of Timo Bernhard, Romain Dumas and Loïc Duval finished 2nd four laps behind (321); the two ran much of the race in the same lap until the latter stages when the #3 car fell behind pace of the #2 and made contact with another car, causing a lengthy final pit stop for nose repair (besides the refuel). The #1 of the 2011 Le Mans-winning team finished 16th overall and 5th among WEC LMP1 competitors (310); the car was less reliable than the other two, marred by a gearbox issue midway in the race.

Both the Ultra and e-tron Quattro made their racing débuts at the 2012 6 Hours of Spa-Francorchamps as part of a four-car Audi entry in the FIA World Endurance Championship. The #3 car of Romain Dumas, Loïc Duval and Marc Gene gave the Ultra victory over the e-tron Quattro. Audi finished 1-2-3-4 in the race. Audi had entered a four car line-up for Le Mans. The e-tron Quattro finished first and second with the Ultra finishing in third and fifth. The leading car covered 5151.8 km, making 33 pit stops.

Audi intended to run one of each model for the remaining five races in the season. Audi has instead run two e-tron Quattros since Bahrain.

Audi R18 e-tron quattro (a 2012 R18 with the high downforce sprint bodywork) was featured in the Audi RS 6 Avant TV commercial titled 'Perfect Fit'. The car was also used on public roads in a commercial to welcome Porsche back for the 2014 Le Mans race 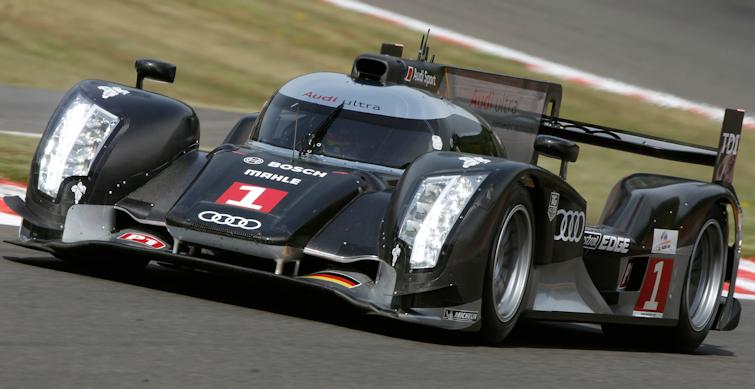