The Audi R8 (Typ 42) is a mid-engine, 2-seater sports car, which uses Audi's trademark quattro permanent all-wheel drive system. It was introduced by the German automaker Audi AG in 2006.

The car was exclusively designed, developed, and manufactured by Audi AG's high performance private subsidiary company, quattro GmbH, and is based on the Lamborghini Gallardo platform. The fundamental construction of the R8 is based on the Audi Space Frame, and uses an aluminium monocoque which is built using space frame principles. The car is built by quattro GmbH in a newly renovated factory at Audi's 'aluminium site' at Neckarsulm in Germany.

In 2005, Audi announced that the name of the successful Audi R8 race car would be used for a new road car in 2007, the Audi R8, based on the Audi Le Mans quattro concept car (designed by Frank Lamberty and Julian Hoenig), appearing at the 2003 International Geneva Motor Show, and 2003 Frankfurt International Motor Show. The R8 development program began in 2004, Lamberty's design being approved and frozen for production. Production body prototypes began field testing in January 2006. The R8 road car was officially launched at the Paris Auto Show on 30 September 2006. There was some confusion with the name, which the car shares with the 24 Hours of Le Mans winning R8 Le Mans Prototype (LMP). 6-time 24 Hours of Le Mans winner Jacky Ickx described the R8 as "the best handling road car today".

The Audi R8 was initially equipped with a 4.2 litre V8 engine. Specifically, it is an all-aluminium alloy 32-valve (four valves per cylinder) petrol engine, utilising Fuel Stratified Injection (FSI), and has a displacement of 4,163 cubic centimetres (254.0 cu in). It develops a motive power output of 420 metric horsepower (309 kW; 414 bhp) (Directive 80/1269/EEC), and generates 430 newton metres (317 lbf·ft) of torque, on 98 RON 'Super Unleaded' petrol. It is basically the same engine used in the Audi B7 RS4, but is modified to use a dry sump lubrication system. This V8 is a highly reworked, high-revving variant of the existing 4.2 litre V8, but includes cylinder-direct fuel injection (Fuel Stratified Injection), and four valves per cylinder, instead of five (as used on the previous non-FSI variants). It also uses two chain-driven double overhead camshafts (DOHC) per cylinder bank, and utilises variable valve timing for both inlet and exhaust camshafts. The 4 wheel drive system is biased towards the rear; it sends 30% of its power to the front wheels and 70% to the rear.

Although it was rumoured by the automotive press since the announcement of the production R8 in 2006, it was only in August 2008 that spy shots of a convertible R8 "Spider" from filming scenes of the movie Iron Man 2 were published online. The photos showed a clearly visible "soft-top" roof, and the distinctive sideblade had been removed.The vehicle was formally unveiled at the 2009 Frankfurt Motor Show. Compared with the coupé model, the convertible will have extra chassis support, a pair of roll-over safety bars, as well as minor changes such as the location of the fuel filler. It will be powered by a 5.2 FSI V10 engine.

The vehicle was unveiled at the Detroit Auto Show in 2008.

The development of R8 TDI vehicles was cancelled, citing the cost of re-engineering the petrol R8 to accommodate the massive twin-turbocharged diesel engine is simply too great, and that it would be unable to recoup its investment through sales alone.

For 2009, Audi announced the production of an R8 LMS racing car, designed for the GT3 rules in the FIA GT3 European Championship and various national racing series. Known within Audi Sport as the 'R16', the R8 LMS features a 500 PS (368 kW; 493 bhp) V10 engine. Because the GT3 regulations prohibit the use of four-wheel drive, Audi had to drop its 'trademark' quattro four-wheel drive system, and the R8 LMS is only available with the typical rear-wheel drive setup. The torque is transmitted via a newly developed six-speed sequential sports gearbox. The car was manufactured by Audi Sport, quattro GmbH, and Audi Hungaria Motor Kft. (Györ).

The first test races in various European racing series was scheduled for the 2009 season. Delivery to the customers was planned from the autumn of this coming year. The R8 LMS GT3 was reported to cost $350,000USD. European model was sold for €262,000 (VAT included).

The all-electric Audi e-tron concept car was unveiled at the 2009 Frankfurt Motor Show, followed by 2009 LA Auto Show (in orange body colour), and at the 2010 24 Hours of Le Mans.

Audi originally announced the first e-tron model to be built by quattro GmbH at Neckarsulm, with a small production series beginning in late 2012. The R8 e-tron prototype was unveiled at the 2011 Frankfurt Motor Show.

The prototype is based on the R8 and follows closely the original concept, with a shape reminiscent of existing V8 and V10 petrol-powered versions. Audi claims the production version of the R8 e-tron will be capable of a 0–100 km/h (62 mph) time of around 4.8 seconds, making it only 0.2 seconds slower than the R8 V8. Initial plans call for its top speed to be limited to 124 mph (200 km/h) to protect the charge of the battery. It is planned for launch in early 2012. Along with the R8 e-tron, Audi is also considering small-scale production of a smaller and lighter zero-emission sportscar based on the second e-tron concept displayed at the 2010 Detroit Motor Show.

In 2010 Audi began a development program with the objective to manufacture a limited edition of the R8 e-tron. On June 26, 2012, one of the earliest R8 e-tron prototypes set a new electric car lap record at the Nürburgring racetrack with a time of 8:09.099.

After developing 10 prototypes for research and development purposes, in May 2013 Audi decided to put on hold the production of the electric car due to its limited all-electric range as battery technology did not advanced as fast as Audi had expected, making the R8 e-tron unviable for series production.

In March 2014 Audi revised its decision and announced it will build the R8 e-tron upon customer request. The carmaker explained that their latest development work resulted in an increased range from 215 km (134 mi) to approximately 450 km (280 mi). The limited production R8 e-tron will be based on the R8 new-generation platform shared with the Lamborghini Huracan.

Changes to the 2009 R8 LMS include the improvement of the engine cooling system capacity, suspension revisions, race-optimised electronics and exhaust systems, and a 6-speed transmission that can be inspected through an opening in the housing without the need to dismantle the entire assembly. Previous vehicles could be upgraded via an update kit.

The final version of the vehicle was sold for €298,000 (£267,000 in UK), with the first delivery went to American-owned United Autosports team from Yorkshire in England.

It is a limited (333 units, 50 in USA) production vehicle that combines the improvements in R8 GT with a convertible body. The German model went on sale for base price of €207,800.

The vehicle was unveiled in 2011 at Le Mans.

US model went on sale as 2012 Model Year vehicle, with delivery beginning in February 2012.

The vehicle was available to order from July 2011, with UK deliveries began in October.

As part of NASCAR's embracing of GT3 in their Grand American Road Racing Association Rolex Series races, GT3 cars are permitted to run with slight restrictions as the "national" GT3 in the United States. This version (Grand-Am) features an engine with its power reduced from 470 PS (346 kW; 464 bhp) to 450 PS (331 kW; 444 bhp) via air restrictor and the engine electronics, a reduced fuel tank capacity of 83.3 litres, three-part rims for wheels and suspension, and deactivated anti-lock system and traction control (NASCAR/Grand-Am does not permit either traction control nor anti-lock brakes). Additional changes include loss of aerodynamic grip via smaller front splitter and rear diffuser, stiffer roll cages, an Earnhardt bar (anti-intrusion bars on the windscreen), and side window nets on both sides, both of which are required in the Rolex Series. As is the rule, a specification Continental tyre is used. Compared to the Audi R8 LMS ultra, the R8 Grand AM has lower down force.

R8 V10 plus (available only as a coupé) includes:

Other options for all R8 variants include a high-beam assistant, a stowage package, various travel case sets, a cell phone preparation, with belt microphone and voice control, and the parking system plus with reversing camera.

UK models went on sale as 2013 model year vehicles. The sales began in August 2012, with deliveries began in early 2013.

The vehicle was unveiled in 2013 Geneva Motor Show, followed by 2013 Frankfurt Motor Show.

It is a version of Audi R8 LMS ultra GT3 race car for the GT Daytona class of United SportsCar Championship, which include the 5.2-liter V10 FSI engine of the Audi R8 LMS. 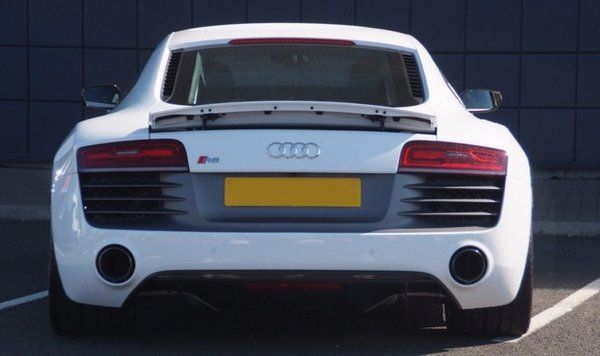