The Audi Q7 is a full-size luxury crossover SUV unveiled in September 2005 at the Frankfurt Motor Show. Production of the Q7 began in autumn of 2005 at the Volkswagen Bratislava Plant in Bratislava, Slovakia. It is the first SUV offering from Audi and went on sale in 2006. Later, Audi's second SUV, the Q5, was unveiled as a 2009 model. Audi has since unveiled a third SUV model, the Q3, going on sale in the 3rd quarter of 2011. The Q7 shares a platform with the Volkswagen Touareg and the Porsche Cayenne.

The Q7 (internally designated Typ 4L) utilizes a modified version of the Volkswagen Group PL71 platform. Previewed by the Audi Pikes Peak quattro concept car, the Q7 is designed more for on-road use, and was not meant for serious off-road use where a transfer case is needed. In an off road test through the Australian outback it fared well for a "soft roader", Although it lacks a low-range transfer case, it has quattro permanent four wheel drive system with a central differential lock, and an adjustable-height air suspension which helps in off road situations. Development began in 2002 under the code AU 716, primarily focused on the Pikes Peak Concept. Design work was frozen for the Concept in July 2002, for presentation at the North American International Auto Show in January 2003. Following the introduction of the concept, full-scale development began on Typ 4L of the PL71 platform. The production design was frozen in late 2003, for a late 2005 start of production. Prototypes went into testing in December 2004, with development concluding in mid-2005.

Despite its multiple airbags and safety electronics, such as Electronic Stability Programme (ESP), the Q7 scored only four stars out of five in the Euro NCAP crash test for adult occupant protection. According to Audi, this was caused by a design error, and has since been fixed in cars manufactured after the test which should allegedly lead to five stars. Official tests to prove this remain to be done as of March 2009.

However in the United States, the Q7 received five out of five stars from the National Highway Traffic Safety Administration (NHTSA) safety test for both front and side impacts. The Insurance Institute for Highway Safety awarded the Q7 its Top Safety Pick, with Good ratings in all 14 measured categories of the front and side impact test.

It was first released as 2007 model, with Q7 4.2 quattro available at launch.

The vehicle was unveiled at the 2005 Frankfurt Motor Show.

Audi reportedly was going to introduce a hybrid version of the Q7 sometime in the future However, the low US dollar caused Audi to drop the plans for the US market, but stated limited quantities would be available for the commercial market. Audi's research and development chief, Michael Dick, later announced Q7 hybrid would be produced in limited numbers for test purposes only and that development work would focus on a more advanced lithium-ion battery-based hybrid system for the Q5.

The Q7 3.0 TDI clean diesel is a version of 3.0 V6 TDI with selective catalytic reduction. The engine was later used in the next generation of the Q7 for the European market. The 3.0-litre TDI S line can go from 0-60 mph in 8.4 seconds and has a top speed of 134 mph.

The engine was "based" on the diesel technology from Audi R10 TDI race car, though both engines are completely unrelated: the bore / stroke / angle of the blocks are different and they do not share a single component . The only twelve-cylinder diesel engine used in any passenger car, it was rated at 500 PS (370 kW; 490 hp) and 1,000 N·m (740 lb·ft). This gives the vehicle a 0–100 km/h acceleration time of 5.5 seconds. The Q7 V12 TDI is, according to Audi, the best handling Q7 due to a revised suspension, tires and brakes. Audi claims the Q7 V12 TDI can handle a lateral inclination of over .9 g on a 300-foot (91 m) skid-pad.

The concept vehicle originally appeared at the 2006 Paris Motor Show.

Audi had announced V12 diesel version for the US market using diesel emission treatment technology jointly developed with Volkswagen and Mercedes-Benz under the label "BlueTec". Audi cancelled the plan to federalize the Q7 V12 TDI for the US market due in part to the global financial crisis of 2008.

This V12 version is no longer available for the model year 2013 in anticipation of the cosmetic and mechanical update of Q7 for 2014. The auto listing websites, mobile.de and autoscout24.de, have shown the 2012 model year availability of V12 version.

It is a concept version of Q7 V12 TDI with Inuit white interior with wood decoration. The design theme was inspired by luxury yachts.

The vehicle was unveiled in 2009 Pebble Beach Concours d'Elegance.

A brand new facelift brought optional LED headlights, an 8-speed transmission, start/stop fuel-saving technology, CO2 rating reduced to 195 g/km, and a wraparound tailgate design. Also more flat and metallic colors became available and 21-inch titanium-effect wheels became an optional extra. Certain models now achieved upwards of 37 MPG . New Engines include 2 3.0 supercharged engines. One of the supercharged engines puts out 272 horsepower (203 kW) and 295 lb·ft (400 N·m) of torque. The other engine which is found on the S-line prestige Q7 puts out 333 hp (248 kW) and 325 lb·ft (441 N·m) of torque and is the twin of the engine found in the S4 and S5 cabrios. These engines replaced both the 3.6 and 4.2 L gas engines. Both engines have the same fuel economy.

Audi has added their new Audi Connect to the MMI system, which adds internet-driven POI search, via user input or via the voice control system, as well as access to online services delivering local fuel prices, news, weather and other information. Audi Connect also offers in-car WiFi connectivity for up to 8 devices.

This is the last model year for the V12 version. 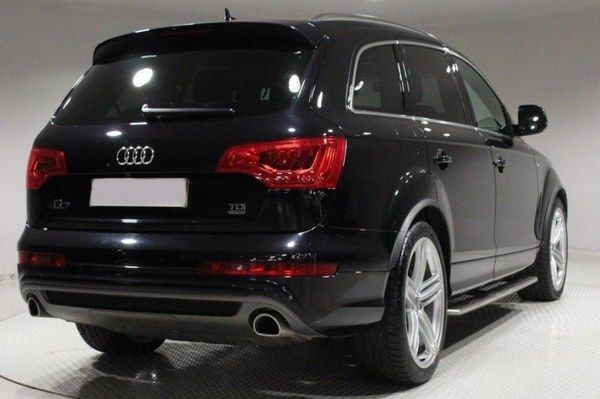