The Audi V8 (Typ 4C) is a four-door, full-size, luxury sedan, built by Audi in Germany from 1988 to 1993, as the company's flagship model. It was the first car from Audi to use a V8 engine, and also the first Audi to combine a quattro system with an automatic transmission. Early cars used 3.6 litre V8s, whilst later cars utilized a 4.2 litre version of the engine. The Audi V8 was replaced by the Audi A8 in 1994, although the A8 was not sold in North America until 1997.

The competition model of the Audi V8 won two back-to-back Deutsche Tourenwagen Meisterschaft driver's titles in 1990 and 1991, with the championship winners being Hans-Joachim Stuck and Frank Biela respectively.This resulted in Audi becoming the first company to win back-to-back DTM titles.

Notably, the Audi V8 had a galvanized steel body, with a 10 year anti-perforation warranty (against corrosion). The Audi V8 was specifically designed to be a top of the range 'flagship' car and included a number of luxury features as standard equipment, including leather seating and Audi's famous quattro all wheel drive system (see standard features list).The Audi V8 created a new elevated image for the company, providing a viable alternative to established competitors such as Mercedes-Benz. In this regard, the car was a cornerstone in developing the history of the Audi marque as it is today.

Factory production commenced in October 1988, and ceased in November 1993, although sales of completed vehicles continued in 1994. It was replaced by the Audi A8 in 1994.

The styling of the Audi V8 resembled the Typ 44 Audi 100 and 200 models, and was based on a stretched version of the Volkswagen Group C3 automobile platform, known either as the D1 or D11 platform. The Audi V8 differed from the Audi 100/200 with a unique grille attached to the hood, new bumpers and headlights, all-red tail lamps, extended wheelbase, wider track, pronounced fenders, and a completely different interior. Furthermore, only alloy wheels were offered, ranging from 15 to 17 inches.

In addition to the standard-length model, there was also a long wheelbase (LWB), ('Lang' in German) version of the V8 (refer to the infobox for differences in dimensions). It was assembled at Steyr-Daimler-Puch factory in Graz (see production figures). This tradition would continue with the A8, offered in "A8L" format.

A one-off experimental Avant (estate) version was built for the wife of former Audi CEO Ferdinand Piech. This car is no longer on display at the Audi Forum Ingolstad. The car is now in storage in Neckarsulm. 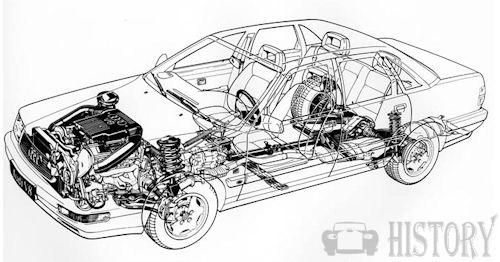 Powertrain detail of the Audi V8 featured one of two all-new, all-aluminium alloy engines – both petrol engines, and both in V8 configuration with 32 valves (four valves per cylinder) with dual valve springs, and four overhead camshafts (DOHC). These new designs would set the pattern for future Audi-developed Volkswagen Group V8 engines. As well as using an all-aluminum alloy for the cylinder block (when the established material was grey cast iron), the camshafts were driven using a hybrid method. A rubber/kevlar toothed timing belt, driven from the front of the crankshaft drives only the exhaust camshaft in each bank. The inlet camshafts are then driven via a simplex roller chain from the exhaust camshaft - the right bank, (cylinders 1-4) at the rear of the engine, and the left bank (cylinders 5-8) at the front of the engine, immediately behind the timing belt. This method effectively reduced the complexity of the timing belt layout (known to be very complex on DOHC V engines), and as a result, required fewer components (idler rollers and guides), leading to easier and less costly maintenance of the timing belt and associated components. The intervals for changing the timing belts varied; the 3.6 V8 (PT) required changing every 90,000 kilometres (60,000 mi), whereas the 4.2 V8 (ABH) had a longer interval at 120,000 kilometres (75,000 mi). A thermostatically controlled electric cooling fan also became standard, replacing the engine-driven viscous fans on earlier cars. This not only provided forced airflow for the engine coolant radiator, but also for the smaller engine oil cooler.

Audi's now proven 'trademark' quattro permanent (or semi-permanent, dependent on gearbox type) four-wheel drive system was the only offering for the drivetrain. This normally distributes the engine torque as a 'default' 50:50 between front and rear axles, but can automatically dynamically apportion up to a bias of 20:80 to 80:20 front and rear. The automatic transmission utilizes a hydraulically controlled multi-plate clutch to apportion drive between front and rear axles,whereas the manual transmission variants utilize a Torsen type 1 Torque Sensing center differential. 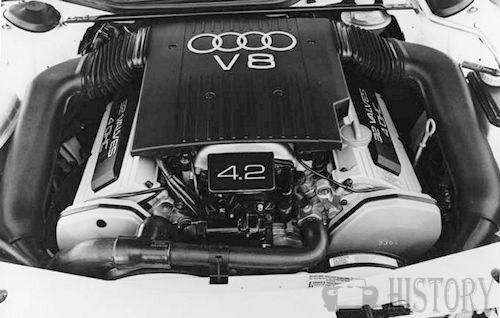 Both available engines use a Bosch Motronic fully electronic engine control unit (ECU), with cylinder bank selective knock control, dual-barrel throttle valve, lambda mixture control via intake air volume metering and exhaust gas temperature sensor, and require unleaded petrol. Fuel is delivered to the combustion chambers via eight intake manifold-sited electronic fuel injectors, fed from two common fuel rails (one per cylinder bank), and are sequentially 'fired' or activated in accordance with the engine firing order. It is important to note though - whilst the 3.6 V8 is able to use 95 RON (91 AKI) fuel, for the 4.2 V8, the more expensive 98 RON (93 AKI) 'SuperPlus' unleaded is required in order to achieve the quoted power outputs. The use of 95 RON in the 4.2 V8 will result in a lower power output, as well as increased fuel consumption.

In August 1991, Audi introduced a 4.2 litre engine, displacing 4,172 cubic centimetres (254.6 cu in), to complement the choice of the existing 3.6 litre V8. This shared many components from the 3.6 V8, and this 4.2 unit was identical to the optional V8 used in the Audi C4 S4 (aka Ur-S4), sharing the same rated outputs and ABH identification code. Like the 3.6 V8 model, the existing four-speed automatic gearbox remained available. However, a new six-speed manual gearbox replaced five speed manual. This powerplant is identified by chrome 'V8' badges on the front grille and at trunk lid, where in some cars also '4.2 quattro' badge is present.

The Audi V8 came equipped with rack and pinion power assisted steering (PAS) as standard. An electronically controlled variable assisted 'servotronic' version was also available. It was fitted with a high performance brake system, which included radially ventilated disc brakes front and rear. The fronts were rather unusual - designed by Continental AG and sized at 310 millimetres (12.2 in) in diameter by 25 millimetres (0.98 in) thick, but mounted the caliper inside the disc - and often coined the phrase "UFO brakes". The fronts also incorporated electronic brake pad wear sensors. The rears were 269 millimetres (10.6 in) by 20 millimetres (0.79 in), and incorporated a cable-operated parking brake. A Bosch Anti-lock Braking System (ABS) was also standard.

Audi developed a Group A competition version of the Audi V8 for entry into the Deutsche Tourenwagen Meisterschaft (DTM) (German Touring Car Championship) auto racing series equipped with 309 kW (420 PS; 414 bhp), later 340 kW (462 PS; 456 bhp), 3.6 V8 engine and 6-speed manual transmission, and began racing with it in 1990 with Schmidt MotorSport (SMS) running the operation, and Hans-Joachim Stuck, Walter Röhrl and Frank Jelinski driving. In the 1990 DTM season all off the three teams claimed together the entire podium (1st, 2nd and 3rd places) at Hockenheimring race. Stuck won the title, and the following year, Audi added a second team to the mix, Audi Zentrum Reutlingen (AZR). SMS continued with Stuck and Jelinski, while AZR raced with Frank Biela and Hubert Haupt. Biela gave Audi another crown in 1991, but was unable to defend the title in 1992.

For the 1992 season, Audi had changed their engines to use a 180° flatplane crankshaft, which they said had been re-forged and bent from the original 90° crossplane part as used in production model. The DTM organisers found this highly modified crankshaft deviated from original homologated standard crankshaft, and therefore deemed it illegal. Audi subsequently withdrew from the championship.

During its presence at DTM the Audi V8 competed with much smaller and about 300 kg (661 lb) lighter Mercedes 190, BMW M3, and slightly smaller Opel Omega 3000. None of those cars was equipped with a V8 engine or 4-wheel drive. 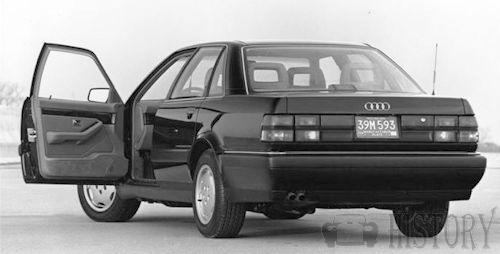