The production model (internal designation Typ 8N) was launched as a Coupé in September 1998, followed by a Roadster in August 1999. It is based on the Volkswagen Group A4 (PQ34) platform as used for the Volkswagen Golf Mk4, the original Audi A3, the Škoda Octavia, and others. The styling differed little from the concept, except for slightly reprofiled bumpers, and the addition of a rear quarterlight windows behind the doors. Factory production commenced October 1998.

Early TT models gained press coverage for a series of high-speed accidents in Europe. Reported crashes and related fatalities occurred at speeds in excess of 180 kilometres per hour (110 mph), during abrupt lane changes or sharp turns. Both the Coupé and Roadster models were recalled in late 1999/early 2000, to improve predictability of the car's handling at very high speeds. Audi's Electronic Stability Programme, and rear spoiler were added, along with suspension modifications. All changes were subsequently incorporated into future series production versions of the car.

The original generation Audi TT was nominated for the North American Car of the Year award for 2000. It was also on Car and Driver magazine's Ten Best list for 2000 and 2001. 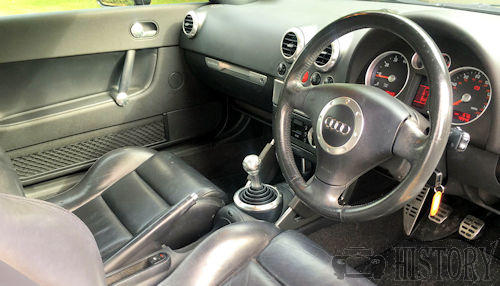 Mechanically, the TT shares an identical powertrain layout as its related Volkswagen Group platform-mates. The TT uses a transversely mounted internal combustion engine, with either front-wheel drive, or 'quattro' on-demand four-wheel drive. It was first available with a 1.8-litre inline four-cylinder 20-valve turbocharged engine in two states of DIN-rated power outputs; 180 PS (132 kW; 178 hp) and 225 PS (165 kW; 222 hp). The engines share the same fundamental design, but the 225 PS version features a larger K04 turbocharger, an additional aftercooler on the left side (complementing the existing right-side intercooler), forged connecting rods, a dual tailpipe exhaust, and a few other internals – designed to accommodate the increase in turbo boost, from roughly 10 pounds per square inch (0.7 bar) peak, to 15 pounds per square inch (1.0 bar). Haldex Traction enabled four-wheel drive, 'branded' as "quattro" was optional on the 180 engine, and standard on the more powerful 225 version.

The original four-cylinder engine range was complemented with a 250 PS (184 kW; 247 hp) 3.2-litre VR6 engine in early 2003, which comes as standard with the quattro four-wheel-drive system. In July 2003, a new six-speed dual clutch transmission – dubbed the Direct-Shift Gearbox, which improves acceleration through much-reduced shift times, was offered, along with a stiffer suspension.

This weight loss was achieved by deleting the spare wheel, rear counterweight, rear parcel shelf and rear seats, and the standard fitment air conditioning. The main battery was also relocated to the rear of the vehicle in order to maintain weight distribution as much as possible. Lightweight fixed-back Recaro bucket seats graced the interior. Distinguishable from other TT Coupés by its two-tone paint scheme (Phantom Black pearl painted roof, pillars and mirror housings, in combination with either Avus Silver, Phantom Black, Mauritius Blue or Misano Red body colour) and unique 18" 15-spoke cast aluminium alloy wheels, plus the same body kit as fitted to the TT 3.2 V6, the TT quattro Sport also featured black exhaust tailpipes and uprated suspension settings and new wheels, ½" wider at the rear for improved handling. The brochure stated V6-spec brakes were to be fitted, however models delivered in the UK came with the standard 225 spec brake callipers which were red-painted. 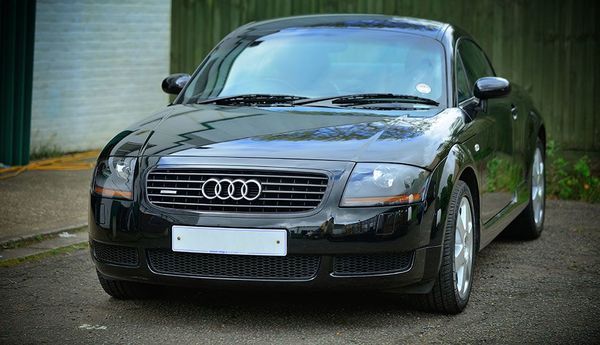