The second-generation TT was provided in the form of the Audi Shooting Brake concept car, shown at the Tokyo Motor Show in 2005. This concept was an insight into the new TT, but featured angular styling, and a "shooting brake" two-door hatchback body style.

Audi revealed the second-generation TT, internal designation Typ 8J, on 6 April 2006. It is constructed on the Volkswagen Group A5 (PQ35) platform, and uses aluminium in the front bodypanels, and steel in the rear, to enhance its near-neutral front-to-rear weight distribution. It is available in front-wheel drive or 'quattro' four-wheel drive layout, and is again offered as a 2+2 Coupé, and as a two-seater Roadster. Compared to the previous generation, this new variant is five inches longer and three inches wider than its predecessor. Factory production commenced during August 2006.

The powertrain options initially only included petrol engines, which consist of either one of two inline four-cylinder engines – the all-new 1.8-litre EA888 Turbocharged Fuel Stratified Injection (TFSI) (available initially only in Germany, later elsewhere from mid 2009), or the more common and established EA113-variant 2.0-litre TFSI. The Fuel Stratified Injection (FSI) technology was derived from the Audi Le Mans endurance race cars, and offers improved fuel efficiency as well as an increased power output and cleaner emissions. The 3.2-litre 'V6' badged VR6 engine is carried over from the previous generation, and this engine was also available in the Canadian model. 2.0 TFSI quattro models, with the latest EA888 engine, became available in 2009 model year.

A six-speed manual transmission is standard, with the six-speed Direct-Shift Gearbox (now called "S-TRONIC" on all Audi models) as an option for all but the 1.8-litre engine. Quattro on-demand four-wheel drive, again using the Haldex Traction clutch is available – standard on V6 models, but not available on the 1.8 TFSI.

8J suspension and other features

Like all its PQ35 platform-mates, the new 8J TT now has a multi-link fully independent rear suspension to complement the front independent suspension. The entire suspension system can be enhanced with Audi's new active suspension, "Audi Magnetic Ride", available as an option. This is based on BWI Group's MagneRide, which uses magneto rheological dampers (this means that an electronic control unit for the suspension will automatically adjust its damping properties depending on the current road conditions and driving manner). 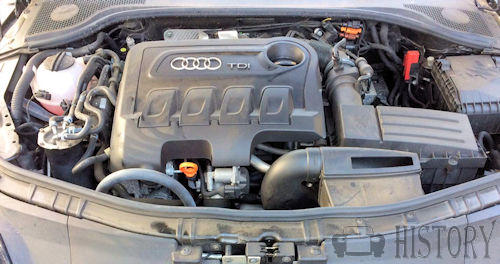 Launched at the 2008 Geneva Motor Show, Audi offered the first diesel engined version of Audi TT in the European market, the Audi TT 2.0 TDI quattro. As its name indicates, it is only available with quattro, and is also available in Coupé and Roadster versions. Power comes from the new 2.0-litre Turbocharged Direct Injection (TDI) engine, now with 16 valves, double overhead camshaft (DOHC), 1,800-bar (26,110 psi) common rail fuel delivery and eight-hole piezo fuel injectors,which produces a DIN-rated output of 125 kilowatts (170 PS; 168 bhp) at 4,200 revolutions per minute (rpm) and torque of 350 newton metres (258 lbf·ft) at 1,750 to 2,500 rpm. It includes a six-speed manual transmission. 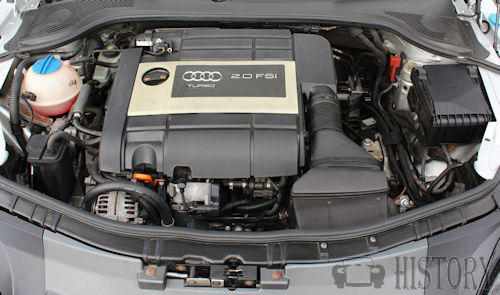 At the 2008 North American International Auto Show (NAIAS) in Detroit, Audi released the first Audi "S" model of the TT range – the Audi TTS quattro, with a heavily revised 2.0 TFSI engine. The cylinder block, cylinder head and the fuel injectors have all been modified from the base 2.0 TFSI engine (ID: CDL). Together with other modifications, this engine produces a DIN-rated motive power output of 200 kilowatts (272 PS; 268 bhp), and generates a torque turning force of 350 newton metres (258 lbf·ft) from 2,500 to 5,000 rpm.

The suspension is lowered by 10 millimetres (0.4 in) over the standard models, and includes "Audi Magnetic Ride" as standard and a new two-stage sports-biased Electronic Stability Programme (ESP). Radially ventilated front disc brakes are clamped by a single-piston gloss black caliper emblazened with a bold TTS logo, and a lap timer is prominent in the centre of the instrument cluster. 9Jx18" '5-parallel-spoke' design alloy roadwheels are standard, with 245/40 ZR18 high-performance tyres. 19" '5-spoke star' wheels and tyres are optional. The exterior has some changes over the standard model – with a TTS body styling: with redesigned front, with larger air intakes, redesigned rear bumper, side sill extensions, and four exhaust tailpipes.

Audi UK offered eight TTS cars for official use by the race organisers at the 2008 Isle of Man TT motorcycle races.

Audi displayed a new show car variant of the second generation Audi TT – the Audi TT Clubsport quattro, at the 2008 Wörthersee Tour at Pörtschach am Wörthersee in Austria. Shown only in an open-topped 'speedster' variant, its 2.0 TFSI engine has been tuned to give 221 kilowatts (300 PS; 296 bhp).The soft-top on the standard TT Roadster has been deleted, and replaced with two 'humps', along with two substantial roll bars. LED daytime running lamps, an aggressive body kit with large frontal air intakes, black-painted 'single frame grille' and a lower spoiler lip complete the new look from the front The axle track has been widened by 66 millimetres (2.6 in), with bolder and wider wheel arch extensions, polished 19-inch alloys, wider side sills and 255-section tyres are the highlight of the side profile. At the rear, twin polished stainless steel oval tail pipes exit aside a new rear diffuser.

Racing bucket seats, along with lightweight aluminium detail complete the interior look, and a six-speed S tronic dual-clutch transmission with quattro four-wheel drive and TTS spec brakes (340 millimetres (13.4 in) up front, and 310 millimetres (12.2 in) at the rear) complete the mechanicals.

Whilst the TT Clubsport quattro is primarily a 'show car', Audi has not ruled out the possibility of small-scale production. 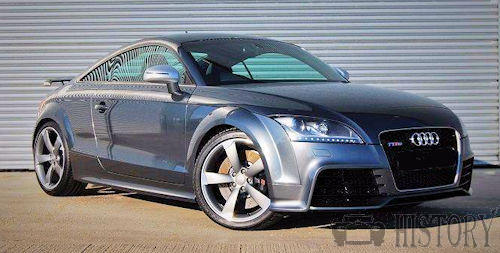 With its world debut at the 2009 Geneva Auto Show,and developed by Audi's high-performance subsidiary quattro GmbH at Neckarsulm, Audi released the first ever compact sports car Audi "RS" model – the Audi TT RS, which was available from 2009 in Coupé and Roadster variants. This new TT RS harks back to the sporting legacy of 1980s Audi Quattros – with their high-performance five-cylinder turbocharged engines,the TT RS will include an all-new 2.5-litre inline five-cylinder Turbocharged Fuel Stratified Injection (TFSI) petrol engine. This new 183 kilograms (403 lb) engine produces a DIN-rated motive power output of 250 kilowatts (340 PS; 335 bhp) from 5,400 to 6,700 rpm, and torque of 450 newton metres (332 lbf·ft) at 1,600–5,300 rpm.

Ever since the original Audi "RS" model – the Audi RS2 Avant, all Audi "RS" models were assembled at the quattro GmbH factory in Neckarsulm, Germany. The TT RS is the first Audi RS vehicle that will not have any of its assembly performed in Neckarsulm but will be completely assembled in the Audi factory in Győr, Hungary,alongside the base Audi TT.

The TT RS has a new short-shift close-ratio six-speed manual transmission, and like all "RS" models, is only available with Audi's 'trademark' quattro four-wheel-drive system, with the TT RS using a specially adapted version of the latest generation multi-plate clutch from Haldex Traction. Additions to the quattro system include a constant velocity joint before the cardan propeller shaft, and a compact rear-axle differential – upgraded to cope with the increased torque from the five-cylinder turbo engine.

Like the TTS, the TT RS has a 10 millimetres (0.4 in) lower ride height, optional "Audi Magnetic Ride", and rides on standard 18-inch roadwheels with 245/45 ZR18 tyres (optional 19" or 20" wheels are also available). The brakes are upgraded to include two-piece cross-drilled and radially vented front discs, sized at 370 millimetres (14.6 in) in diameter. The front discs are clamped by gloss black painted four-piston calipers, adorned with the RS logo. Rear ventilated discs are sized at 310 millimetres (12.2 in) in diameter.

It includes a fixed rear spoiler (retractable optional), and has black interior with heated Alcantara/leather sports seats (Silk Nappa, Fine Nappa leather optional). The Recaro "RS bucket" seats, first seen in the Audi B7 RS4 are also available as an option. Also carried over from the B7 RS4 is the 'Sport' button, which sharpens the throttle response and deepens the exhaust note, and a three-stage user-selectable Electronic Stability Programme (ESP).

As of 2010 the TT-RS is available with the 7-speed DSG automatic transmission capable of handling the torque delivered by the engine. The 6-speed gearbox used in the TT-S cannot cope with 450 newton metres (332 lbf·ft) which is why the TT-RS initially was offered only with a manual transmission.

The car went on sale in March 2009, with delivery beginning in summer.

In 2010, the TT-RS was confirmed for the US market. The decision was influenced by an internet petition to bring the TT-RS stateside, which succeeded with over 11,000 signatures. The TT-RS is expected to arrive in Q3 2011.

According to the May 2011 issue of Car and Driver (in which they tested a Euro-spec model in a comparison along with the BMW 1 Series M and Infiniti G37 IPL coupe), the North American model will have the same powertrain (possibly with 360 hp), but will only be available with the six-speed manual transmission. They will not have launch control or the racing-style Recaro seats available elsewhere.

The TT RS plus is also notable for featuring alongside the Lotus Exige S and the (991 gen) Porsche 911 Carrera S in Top Gear Magazine's "Speed Week".