The third generation Audi S4 quattro (Typ 8E — saloon: 8E2, Avant: 8E5, and Cabriolet: 8H7) debuted its saloon and Avant bodystyles in Europe in March 2003,and appeared in North America slightly later. This was based on the latest Volkswagen Group B6 (PL46) platform used by the then current Audi B6 A4. Despite having moved to an entirely new platform, one of the S4's most publicised new features was its new engine - a 4.2 litre V8 engine. Following its initial launch of either a four-door five-seat saloon (sedan), or a five-door five-seat Avant (estate/wagon), it eventually became available in three bodystyles - and for the first time in the Audi 'S' car range, from February 2004, a two-door four-seat Cabriolet (convertible), Typ 8H, was included in the model range.

Official performance figures for standard discipline of sprinting from standstill to 100 kilometres per hour (62.1 mph) in the saloon with manual transmission are 5.6 seconds (Avant 5.8 s, Cabriolet 5.9 s), however, a road test conducted by the American automotive magazine Motor Trend indicated that it could go from a standstill to 60 mph (96.6 km/h) in less than 5 seconds, and make it to 200 km/h (124.3 mph) in slightly over 20 seconds, although doing this led to fuel consumption dipping into single digits. This was considerably worse than the earlier V6 models, leading to the addition of a $1,700 gas guzzler tax (combined 20.2 miles per US gallon (11.6 L/100 km; 24.3 mpg-imp)) for the six-speed manual sedan in the United States. Top speed is electronically limited to 250 km/h (155.3 mph).

The B6 S4 saloon and Avant variants ceased factory production in December 2004, with the Cabriolet ending twelve months later at December 2005. 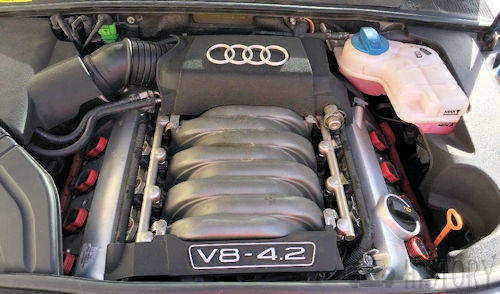 An unusual sight in the engine compartment was the addition of water cooling for the 190 amp alternator, along with two additional thermostatically-controlled side-mounted radiators. 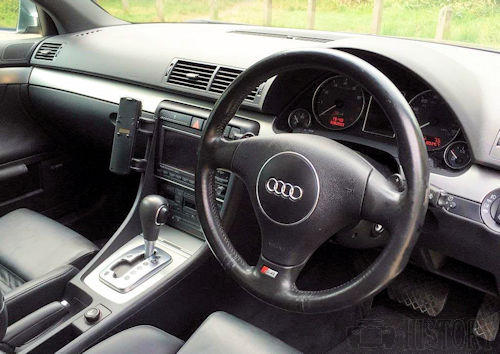 Discrete lower door trims, along with the now trademark Audi 'S' model vertical-emphasis line grille, and solid aluminium (later replaced with plastic covered by aluminium) exterior door mirrors, and S4 badging front and rear are all that visually distinguish the S4 from its related A4 brethren. In the interior, front and rear Recaro seats (fronts fully electric), standard carbon fiber trims, as well as S4 logos in the instrument panel and door sills complete the detail 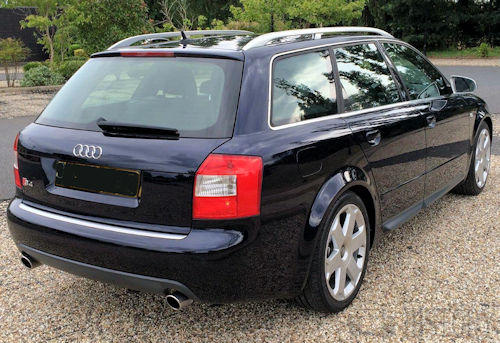