The second generation S4 (Typ 8D), now correctly titled Audi S4 quattro debuted in 1997, with factory production commencing October 1997, as part of the facelifted B5 platform Audi A4 line-up, although it wasn't available in North America until late 1999.

In addition to the saloon (sedan), an estate version (wagon)–the Audi S4 Avant–was introduced into the lineup from 1998. Production of the B5 S4 ceased in September 2001, although it was still sold together with the next B6 platform generation through 2002 in North America. Examples produced July 2001 to end of production are 2002 Model Year cars, the 10th digit of the VIN being the number "2".

Several years after it was sold new, the B5 S4 remains a potent enthusiast car, and as featured in the December 2007 issue of Sport Compact Car magazine, a Torque Factory tuned S4 won a comparison test against several other extreme performance cars.

The B5 S4 is fitted with 4-wheel independent suspension. The front suspension is a multi-link design with four individual control arms per wheel. The rear suspension is an unequal length double wishbone design; the lower control arms are mounted to a subframe which also carries the differential housing. Shock absorbers, coil springs, and anti-roll bars are fitted front and rear.

The B5 S4 brake system consisted of radially ventilated discs, 321 millimetres (12.64 in) in diameter by 30 mm (1.18 in) thick up front, and 256 mm (10.08 in) by 22 mm (0.87 in) at the rear. Two-piston Lucas HP2 brake calipers at the front (with four pads per caliper), with Lucas single-piston sliding brake calipers at the rear. A Bosch ABS 5.3 four-channel Anti-lock Braking System (with Electronic Brakeforce Distribution (EBD) and Electronic Differential Lock (EDL) - and later with ESP or Electronic Stability Programme), coupled with a vacuum servo completed the system. 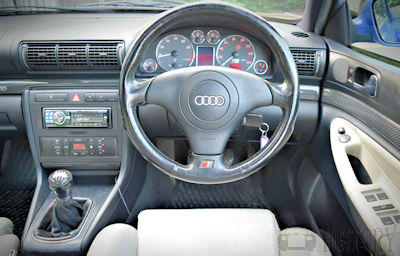 The Sport Package replaced the wood-grain belt line trim with silver aluminum trim, and the wood grain finish around the shifter with black plastic. The Alcantara seat inserts were silver (on Onyx leather). With the black, white, or blue exteriors, the inserts were also available in blue Alcantara. On the early 2000 models, the Alcantara inserts in the rear seats did not fully extend forward to the front edge of the seat.

A motor racing version of the car achieved great success in the SpeedVision World Challenge with Michael Galati taking the 2001 SpeedVision GT title in a Champion Racing S4, winning four races, and helping Audi to its first Manufacturers' Championship. 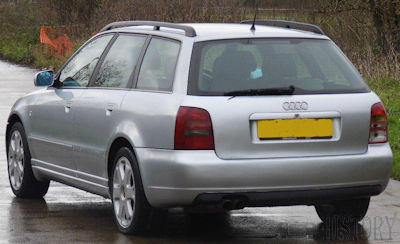