The Audi B7 platform Audi S4 quattro, based on the Audi B7 A4, debuted in late 2004. Although Audi classifies it as a new car, the differences between it and the outgoing B6 S4 casually appear to be primarily cosmetic, and is still classified by the internal designation: Typ 8E (although with revised sub-designations - saloon: 8EC, Avant: 8ED, and Cabriolet: 8HE). It has the same 4.2 litre V8 engine (identification code: BBK) as the B6 S4, producing a power output of 253 kilowatts (344 PS; 339 bhp) at 7,000 revolutions per minute (rpm), and 410 newton metres (302 lbf·ft) torque at 3,500 rpm.

Bose sound system is now standard, whereas it was optional on the B6 S4, and an enhanced optional DVD-ROM-based RNS-E satellite navigation system replaces the previous CD-ROM-based RNS-D option. 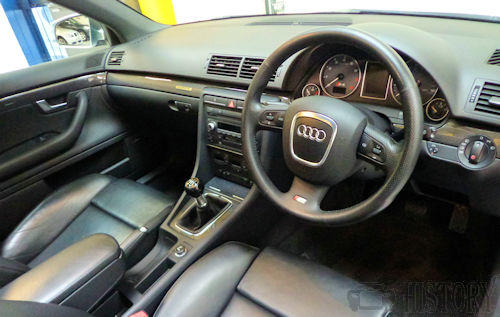 In June 2005, Audi announced a limited edition run of 250 special edition S4 saloon cars, celebrating 25 years of quattro four wheel drive. This exclusive model was called the Audi S4 25 quattro. Available only in the United States, and only in Avus Silver, the exterior has unique front and rear bumpers, a carbon fibre boot lip spoiler and lower front splitter. 15-spoke DTM alloy wheels, along with optional dealer-fitted 'Audi four-rings' decals for the front doors complete the exterior makeover. Black and grey contrasting interior leathers, along with "quattro" embossed into the Recaro seats, together with an individually numbered exclusive quattro gear shift knob for the manual-only gearbox define the interior changes.

On the mechanical side, the S4 25quattro was the second Audi, after the B7 RS4 to be fitted with the latest Torsen T-3 asymmetric ATB centre differential for its quattro permanent four-wheel drive system. Under normal grip conditions, this is set with a default rearwards torque distribution bias of 40:60 front to rear, and a maximum of 100% torque can automatically be apportioned to the rear axle (and up to 80% to the front) as conditions warrant. The final drive ratios are 3.889. 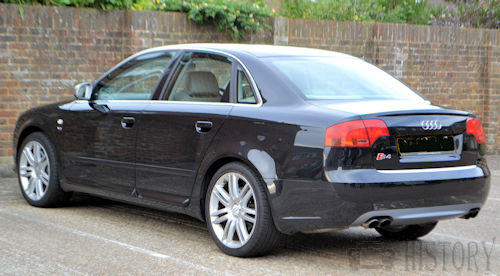