From November 2008, the latest generation of the 'Audi S4 quattro' (Typ 8K) entered factory production. It is based on the current Audi B8 A4, built on the Volkswagen Group MLB/MLP platform. Unlike the previous B6 and B7 models, the new B8 version will only be available as a four-door five-seat saloon (sedan), or a five-door five-seat Avant (estate/wagon). The sport-performance two-door four-seat Cabriolet (convertible) mantle is now taken by the current Audi S5 Cabriolet and new Coupe. Unlike previous generations of the S4, only the sedan will be imported to the United States and Canada. 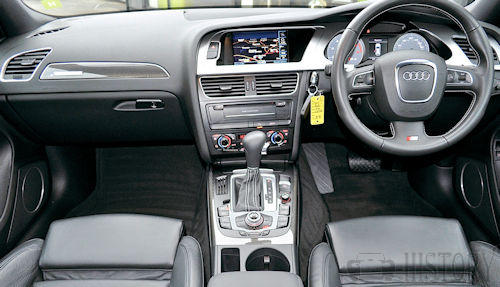 Compared to the previous B6/B7 S4 which used a 4.2 litre V8 engine, this latest B8 S4 utilises a smaller displacement 3.0 litre TFSI V6 engine, but now with the addition of forced induction via a Roots-style Eaton mechanical supercharger.

The previous B6/B7 S4s were the top-of-the-line models in North America, ahead of the 3.2L V6 and 4-cylinder 2.0T A4s, and competed with the BMW M3 which at the time had a high-rev 3.2 L inline 6. The 3.0 TFSI V6 engine replaces the 3.2 litre FSI V6 as the upgrade engine in the A4 and A6 lineups starting for 2009; both the 3.2 litre FSI and 3.0 TFSI were offered together until the end of the 2010 model year. The 3.2L V6 engine is no longer offered in the A4 lineup from the 2011 model year onwards, so the recently introduced B8 S4 is now priced 9% lower than its V8 predecessors, and slots directly above the 4-cylinder 2.0T base model. The S4 now compares more closely with the BMW 335i and Infiniti G37; since the discontinuation of the Audi RS4 (B7) Audi has not produced a direct competitor to the BMW M3 saloon.

Previously unavailable enthusiast driver aids are now optional rather than standard, such as active rear differential, active steering and ultra-quick electrically-adjustable shocks (both via Audi Drive Select Package). The differentials in the S4 are complex and heavy, but are key to reducing understeer, as the S4's weight distribution remains nose heavy like its predecessors. This allows the S4 to perform competitively with more balanced rear-wheel drive sport sedans such as the BMW 335i.

The S4 has sport suspension tuned for contributing to the vehicle's handling and braking. It is also meant for providing safety and comfort by keeping the vehicle's passengers relaxed and isolated from road noise, bumps and vibrations.

The S4 along with the other B8 models received a facelift in early 2012. 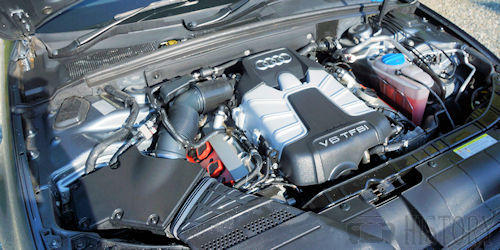 At the heart of the B8 S4 powertrain is an all-new, all aluminium-alloy 3.0 litre TFSI supercharged V6 engine (parts code prefix: 06E, identification code: CAKA), and like the rest of the B8 model range, now with Fuel Stratified Injection (FSI). This petrol engine displaces 2,998 cubic centimetres (182.9 cu in), and it produces a power output of 245 kilowatts (333 PS; 329 bhp) from 5,500 to 7,000 revolutions per minute (rpm). Torque is rated at 440 newton metres (325 lbf·ft) from 2,900 to 5,300 rpm. This high power output is achieved by utilising forced induction – and specifically, an all-new Eaton 'Twin Vortices Series' (TVS) Roots-type positive displacement compressor. This new supercharger features twin four-lobe rotors, which are axially-twisted 160 degrees. It is mounted on top of the engine, within the 'Vee', pumping air directly into the inlet manifold, and incorporates two separate water-cooled intercoolers. This new design of supercharger is said to reduce the noise, vibration, and harshness (NVH) of the engine.

This engine is mated to either a six-speed manual transmission (identification code: KMR) or a seven-speed 'S tronic' DL501 dual clutch transmission (identification code: LHK), the latter with steering wheel mounted paddle-shifters for tiptronic gear selection, which replaces the Tiptronic automatic transmissions found in the B6/B7 iterations. The 'Audi quattro Sports differential' fitted in the rear axle final drive unit is available as an option.

Acceleration from standstill to 100 kilometres per hour (62.1 mph) takes 5.1 seconds[ for the saloon with manual gearbox, the Avant one tenth of a second slower at 5.2 seconds. The same dash to 100 km/h in the saloon with S tronic takes 5.3 seconds, and the Avant at 5.4 seconds. The top speed is electronically limited to 250 kilometres per hour (155.3 mph). With figures like these, the B8 S4 accelerates more quickly than its V8-engined predecessors.Audi of America claims that the version of the S4 achieves 28 highway miles per gallon, and a 0 to 60 miles per hour (96.6 km/h) acceleration time of 4.9 seconds with the manual transmission and 5.1 seconds with the S tronic.Fuel consumption is rated at a combined 24.2 miles per US gallon (9.72 L/100 km; 29.1 mpg-imp).Therefore, the B8 S4, unlike the V8-powered B6/7 models, avoids the US gas guzzler tax. The B8 S4's 3.0 TFSI engine also gets only 1 m.p.g. less than the base 2.0 TFSI engine. This is one of the most important reasons for Audi to downsize their engines, while keeping the output equivalent better, by using forced-induction such as supercharging or turbocharging. 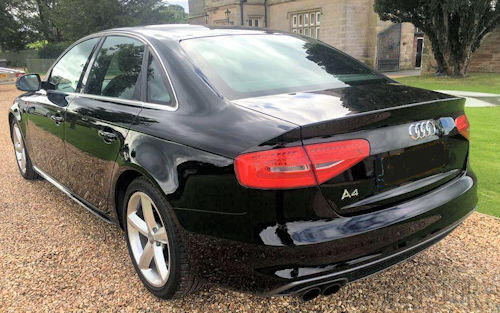