The second-generation RS 6, later called the Audi RS 6 5.0 TFSI quattro (Typ 4F) was based on the Volkswagen Group C6 automobile platform and was launched in September 2007 at the Frankfurt Motor Show. With factory production starting in April 2008, it was available in Europe from the same date, and began to be exported elsewhere in 2009. The total production run of the C6 RS 6 was 8,000 units, with 6,500 of these being Avants and the remainder saloons. The RS 6 was not available in North America, leaving the Audi S6 as the top performing trim there. (The unpopularity of wagons made it unlikely that the RS 6 Avant would be imported, and although it had been rumoured that the RS 6 sedan would be offered in the United States,nothing came of this as the RS 6 importer could not clear US regulations). Production of the C6 RS 6 ended in the third quarter of 2010. 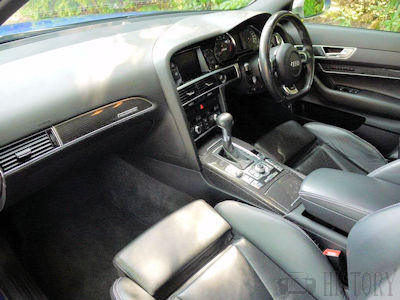 The five-door Avant version of the C6 RS 6 was launched in April 2008, and the four-door saloon/sedan was available from August 2008. Constructed from steel in a monocoque (unibody) design, the RS 6 uses lightweight aluminium for its front wings (fenders) and bonnet (hood).

Visually, the RS 6 differed from the related S6, having flared front and rear wheel arches (fenders), harking back to the original Audi Quattro, to allow for a wider wheel track. It also had no front fog lights to allow for larger frontal air intakes (for the two side-mounted intercoolers (SMICs), and additional radiators). The ten (per side) front light-emitting diode (LED) daytime running lights (DRLs) are located within the main headlamp housing on the RS 6 in order to increase the size of the air intakes, whereas similar LEDs (but five per side) on the related S6 are found adjacent to the fog lamps in the lower front bumper. LED lighting technology was also used in the rear lights. The RS 6 also included adaptive headlights, which swivel around corners in conjunction with steering wheel movements. The facelifted Audi A6, released as a 2009 model, received similar front and rear-end LED lighting styling to that pioneered on the RS 6. 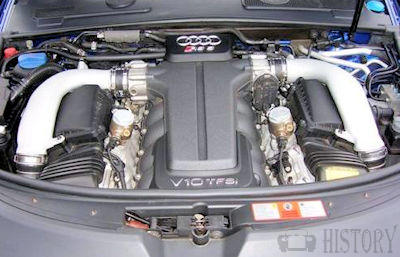 The engine (parts code: 07L, identification code: BUH) of the RS6 was what Audi claimed to be the first all-aluminium alloy 5.0-litre (4,991 cc (304.6 cu in)) 90° V10 twin-turbocharged ("biturbo"), Fuel Stratified Injection (FSI), with a dry sump lubrication system. This engine is related to the naturally-aspirated V10 found in the Audi R8, S6 and S8, and the Lamborghini Gallardo, but the RS 6's engine has around 400 unique parts.

A total of seven radiators, and four electric cooling fans are needed to cool the engine and related components under the aluminium bonnet of the RS6.

Drive output passes through a modified ZF 6HP26A six-speed tiptronic automatic transmission. The parts code 9is 09E and the identification code is KZQ or KZH. The gear ratios are: 1st: 4.171, 2nd: 2.340, 3rd: 1.521, 4th: 1.143, 5th: 0.867, 6th: 0.691, with shortened shift times, with "Dynamic Shift Programme" (DSP) and "Sport" mode. It has paddle-shifts mounted behind the flat-bottomed steering wheel, similar in design to the Audi B7 RS 4. The gearbox is set by default, in conventional automatic mode, to delay up-changes during acceleration, and change down earlier to maximise engine braking. Downchanges in all modes of operation include the Powertrain Control Module electronic control unit (ECU) "blipping" the Bosch "E-Gas" drive by wire throttle, for smoother shift changes. The hydraulic torque converter includes a lock-up function in all forward gears, and is able to completely disconnect when the vehicle is stationary, thus saving fuel.

Like all Audi "RS" models, the RS 6 is fitted with Audi's 'trademark' quattro permanent four-wheel drive as standard. This version of the RS 6 uses the latest asymmetric dynamic 40:60 front-to-rear default torque distribution from the Torsen T-3 'automatic torque biasing' (ATB) centre differential. This latest incarnation of the Torsen quattro, first seen in the B7 RS 4, can automatically dynamically apportion up to a maximum 100% torque to the rear axle, or up to 80% to the front, dependent on traction conditions.

The front and rear final drives are conventional "open" differentials (ratio 3.317), and use the Audi "Electronic Differential Lock" (EDL). EDL is a part, or "function", of the Bosch ESP 8.0 Electronic Stability Programme which also includes "Anti-Slip Regulation" (ASR) traction control system. EDL does not 'lock' the differential in a traditional sense, but uses electronics to compare the speeds of the two wheels on an axle, and brakes any wheel that is sensed to have lost traction (by rotating faster than the opposite wheel, beyond normal accepted deviations). This braking of a slipping wheel has the effect of transferring torque across the axle to the other wheel, which is assumed still to have traction.

Like the previous RS6 and the B7 RS 4 this generation of RS 6 includes Audi's "Dynamic Ride Control" (DRC) Sports suspension system. The system is mainly mechanical, using a pump to provide additional pressure in the diagonally linked dampers (shock absorber) during cornering, to counteract rolling and pitching. The system can dynamically adjust the stiffness at each damper constantly to maintain both a comfortable ride and high grip. On this version, it has a three-way level control, selectable from the Multi Media Interface controls.

The steering system includes rack and pinion speed-dependent "servotronic" power steering, with a ratio of 12.5, and a turning circle of 12.2 metres.

The standard brakes on the RS 6 are cross-drilled, radially vented and floating iron discs. At the front they are 390 millimetres (15.35 in) diameter and 36 mm (1.417 in) thick, clamped by gloss black six-piston fixed Brembo monoblock alloy calipers incorporating the "RS" logo, and at the rear they are 356 mm (14.02 in) diameter and 28 mm (1.102 in) with black single-piston floating calipers and an integrated electro-mechanical parking brake linkage. The parking brake serves doubles as a full emergency brake whilst the car is in motion, by applying maximum braking effort to all four wheels, resulting in activating the Anti-lock Braking System (ABS).

Irrespective of the type of disc construction, all brake discs are mounted via high strength steel mounting pins which connect the 'working' surface of the disc to lightweight alloy disc hubs. 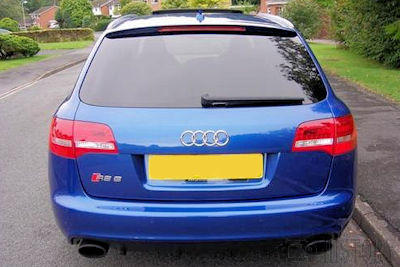