The original Audi C5 RS 6 quattro (Typ 4B) was the top-of-the-line user of the Volkswagen Group C5 platform (1997–2004), and was initially available as a five-door five-seat Avant - Audis name for an estate or station wagon. A four-door five-seat saloon/sedan followed shortly after the launch of the Avant. Derived from the Audi C5 S6 (itself derived from the Audi C5 A6), the RS6 also shares the aluminium structure from the firewall and forward with the C5 A6s with V8 engines (A6 4.2 V8 quattro, S6 saloon/Avant). It was manufactured from July 2002 through to September 2004.

Official performance figures for the Avant, whilst consuming the recommended high octane 98 RON "Super Plus" unleaded petrol indicate the 0-100 kilometres per hour (62.1 mph) dash would be completed in 4.6 seconds (s), reaching 200 km/h (124.3 mph) in 22.8 seconds (22.6 s for the saloon). Official figures state an electronically limited top speed of 250 km/h (155.3 mph), although most "RS" owners report that the speed limiter is rather liberal on all RS cars, with genuine 'limited' top speeds of 270 km/h (167.8 mph) being possible to achieve. Using a lower octane-rated petrol, such as the standard 95 RON "Premium" unleaded will reduce the engine power output, and have logical reduction in performance. 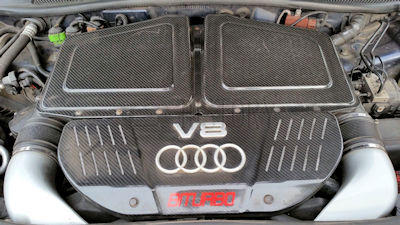 For the C5 RS6 powertrain detail, the internal combustion engine is an all-aluminium alloy 4,172 cubic centimetres (254.6 cu in) twin-turbocharged ('biturbo'), double overhead camshaft, 5 valve per cylinder version of Audi's 4.2-litre 90° V8 petrol engine (parts code prefix: 077, identification code: BCY), developed and manufactured in Germany and the UK by quattro GmbH and Cosworth Technology (now known as MAHLE Powertrain). With the addition of the two turbochargers (one per cylinder bank), the motive power output of the V8 engine was increased to 331 kilowatts (450 PS; 444 bhp) at 5,700 to 6,400 rpm, and generated 580 newton metres (428 lbf·ft) of torque. The combination of the 4.2-litre V8, variable inlet valve timing, and twin turbochargers gave the RS6 an exceptionally wide power band, with peak torque available from 1,950 to 5,600 rpm.

It has an electronically controlled five-speed ZF 5HP24A tiptronic automatic transmission (parts code prefix: 01L, identification code: GAG) (gear ratios—1st: 3.571, 2nd: 2.200, 3rd: 1.505, 4th: 1.000, 5th: 0.804), with lock-up torque converter in all forward gears. It has "hill detection" capability, and, despite many press articles stating that the gearbox was programmed to "blip" the throttle for downshift gear changes, no UK owners have ever found this feature to be present. The transmission control unit ECU incorporates "fuzzy logic" with its "Dynamic Shift Programme" (DSP), with the shift pattern adapting to suit individual driving styles. 'Tiptronic' manual control can be achieved with either the floor-mounted gear shift lever, or the steering wheel mounted 'paddles'.

The RS6 was only available with Audi's Torsen-based quattro permanent four-wheel drive, utilising the Torsen T-2 dynamic 'automatic torque biasing' (ATB) centre differential (diff), a modified unit which was being used in the 6.0-litre W12-powered Audi D2 A8. The torque from the engine is first routed from the gearbox output shaft to the Torsen centre diff, and then automatically divided and apportioned between the front and rear axles.

The front and rear axle differentials (ratio: 3.197) are a conventional "open" type, but utilise an "Electronic Differential Lock" (EDL). EDL is an integrated additional function of the Bosch Electronic Stability Programme (ESP) system, and works by monitoring and comparing the individual roadwheel speeds across an axle, and braking an individual wheel which is sensed to have lost traction (spinning), thus transferring torque across the axle to the wheel/tyre which does have grip. "Anti-Slip Regulation" (ASR), more commonly known as traction control system completes the Bosch ESP-related driver aids.

Utilising the same fully independent four-link front suspension, and double wishbone rear, as its related A6 and S6, the RS6 was lowered by 20 millimetres (0.79 in), with a 30% stiffer spring rate, and 40% increased compression damping. The RS6 also served as the debut model for Audi's "Dynamic Ride Control" (DRC) system. The DRC system is mainly mechanical, and uses a pump to provide additional pressure to individual dampers (shock absorbers) during cornering, acceleration or braking; to counteract rolling and pitching. The system can adjust the stiffness at each individual damper constantly; to maintain both a comfortable ride on straight roads, and high level of poise and grip when cornering hard, accelerating, or braking. The DRC's main advantage is that it operates without the need for complicated electronics, as required in similar systems from Mercedes-Benz and other competitors. Its main drawback is that the DRC dampers have been known to fail (leaking fluid from the cross-linked circuits), which can affect the handling and ride quality of the vehicle; some owners have reported needing multiple replacements of faulty DRC units and many drivers have opted to replace the system with simpler and more reliable aftermarket coilover suspension.

Rack and pinion speed-sensitive "servotronic" power steering was also standard, with a ratio of 16.2, and a turning circle of 11.4 metres (37.4 ft).

The front brakes feature fixed Brembo 8-piston monoblock brake calipers, working with radially vented and cross-drilled brake discs, sized at 365 millimetres (14.4 in) in diameter, by 34 mm (1.34 in) thick. The rear features single-piston floating ATE calipers with integrated cable-operated parking brake mechanism, mated to radially vented disc and cross-drilled, sized 335 mm (13.2 in) by 22 mm (0.87 in). Front and rear brake calipers are finished in a high-gloss black paint, with the fronts incorporating the Audi "RS" logo. Both front and rear discs are held in by metal pins to the lightweight disc hub, and allow 1.0 mm (0.039 in) of lateral thermal expansion from the hub centre.

There were total of three original equipment manufacturer (OEM) roadwheel and tyre types produced for the RS6. In Europe and elsewhere, 19-inch wheels were standard, with an optional 18-inch package. In the U.S. market, the 18-inch package was the only available offering. An 18-inch winter package, with Dunlop SP Winter Sport M3 tyres (225/45 ZR18 95V) was universally available.

For 18-inch wheels, the standard tyre fitted was 255/40 ZR18 99Y XL with eXtraLoad (XL) rating. This is often stressed, and is the only recommendation by Audi, as RS6 does weigh 1,865 kilograms (4,112 lb). Tyres which are not rated XL are not safe (nor legal, in most countries) for use. Owners reported finding Continental ContiSportContact 2, Dunlop SP Sport 9000, Michelin Pilot Sport PS2, and Pirelli P-Zero Rosso as OEM suppliers for tyres on the RS6. However, according to ETKA, the Dunlop and Pirelli tyres were subsequently withdrawn from official supply, and the Continental SportContact 2 has been superseded by the SportContact 3. An additional tyre from Bridgestone has now been included as officially recommended fitment, the Potenza RE050A.

Between April and September 2004, there was a final limited run of an even higher-performance RS6, named the Audi RS6 Plus. This had an increased engine power output (identification code: BRV), and produced over 350 kilowatts (476 PS; 469 bhp) at 6,000-6,400 rpm, with the same 580 newton metres (428 lb·ft) of torque at 1,950-6,000 rpm. This engine was also developed and manufactured in the UK by Cosworth Technology (now known as MAHLE Powertrain). The additional performance was achieved with a new engine control unit (ECU), and two additional coolant radiators behind the side-mounted intercoolers (these were standard fitment on the standard RS6 in hotter climate countries). Official performance figures indicate the discipline of sprinting from standstill to 100 kilometres per hour (62.1 mph) in 4.4 seconds. The RS6 Plus carries on to reach 200 km/h (124.3 mph) in 20.36 seconds, and has an official top speed of 280 km/h (174.0 mph).

The RS6 Plus came with Dynamic Ride Control (DRC) as standard, and also included a no-cost option of "Sports Suspension Plus", which lowered the standard sports suspension by a further 10 millimetres (0.39 in) over the standard RS6. A revised steering rack, with a reduced ratio of 14.3 for firmer steering feel was included, and resulted in a turning circle of 11.7 metres (38.4 ft). The brakes now included cross-drilled discs. The wheels were only available in the 9Jx19-inch '5-arm design' alloys, finished in "anthracite" (dark grey), with 255/35 ZR19 96Y XL tyres.

The car was available only as an Avant, and was sold only in European markets. Visual differences for the RS6 Plus included the "black optic pack", which consisted of black finish to the framing of the radiator grille, exterior window trims, tailgate lower trim, roof rails, and exhaust tailpipes. It quickly sold out once it was released (999 units total). The last three digits of the Vehicle Identification Number (VIN) are reproduced on a plaque inside the car, displayed on the centre console. 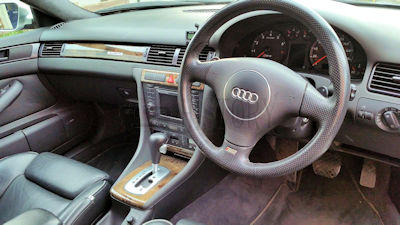 The RS6 was used in the North American SPEED World Challenge GT Series of auto racing for three years - 2002 to 2004, claiming the manufacturers' championship victory successively in all three years. Once again, the special race derivative of the twin-turbo V8 engine was developed and manufactured in the UK by Cosworth Technology (now known as MAHLE Powertrain). However, the 2005 season proved difficult due to performance restrictions imposed on Champion Audi Racing by the Sports Car Club of America (SCCA), with Champion deciding to run a different roadwheel diameter, and the trade-off was reducing boost pressure.

The RS6 was challenged by a factory-backed Cadillac CTS-V, but was still victorious. Champion Audi Racing decided to pull the RS6 from the series, citing unfair rules and regulations that targeted the dominant Audis.