In late 1997, the introduction of a new A6 (Typ 4B), based on a new design automobile platform – the Volkswagen Group C5 platform, with a new range of internal combustion engines was announced. This new A6 moved up a notch in quality, and was marketed in the same categories as the BMW 5-Series and the Mercedes-Benz E-Class. The Italian-redesigned body presented a modern design, with a fastback styling which set the trend for the Audi lineup, and gave the relatively large saloon an aerodynamic shell with a low coefficient of drag of 0.28.

In 2000 and 2001, the "C5" A6 was on Car and Driver magazine's Ten Best list. This new A6 was available with a wide range of engines and configurations. The 30-valve 2.4- and 2.8-litre V6 engines represented the bulk of the A6's development programme, with a multitude of other engine configurations available throughout the globe. As an alternative to the manual transmission, a five-speed tiptronic automatic transmission was also available.

The C5 saloon variant arrived in late 1997, and the Avant in 1998 in Europe. In the United States, the C4 continued for 1997, with the C5 saloon available in 1998, and the C5 Avant available in 1999. In Canada, there was no Avant (Audi's name for an estate/wagon) available at all in 1998 – Audi dropped the C4 Avant at the end of the 1997 model year, and jumped straight to the C5 Avant in 1999 in conjunction with its release in the US. As a result of complying with FMVSS, the North American models were equipped with front and rear bumpers that protruded several inches further than their European counterparts, with modified brackets and bumper suspension assemblies as result, and child-seat tethers for occupant safety. In compliance with Canadian law, Canadian models received daytime running lights as standard equipment. North American C5 A6 models received the 2.8-litre, 30-valve V6 engine, the 2.7-litre "biturbo" V6 (also found in the B5 platform S4), and the 4.2-litre 40-valve V8 petrol engines. The V8 models arrived with significantly altered exterior body panels, with slightly more flared wheel arches (fenders), revised headlamps and grille design (before being introduced in 2002 to all other A6 models), larger roadwheels (8Jx17-inch), larger brakes and Torsen-based quattro permanent four-wheel drive as standard. 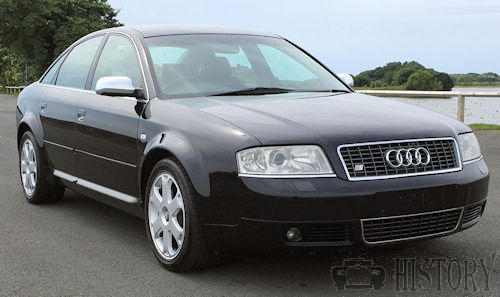 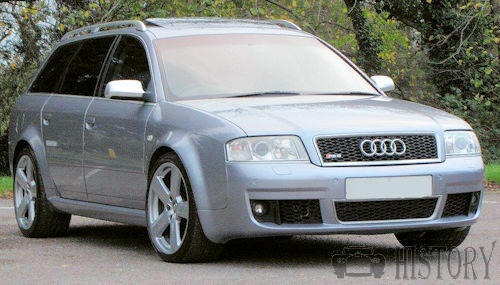 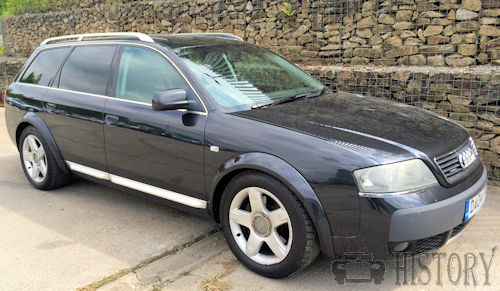 Audi's C5 series A6 Avant formed the basis for an semi-offroad model in 1999, labeled "Audi allroad quattro". Compared to the regular A6, the allroad featured an advanced air suspension system, allowing for increased ground clearance; larger wheels with all-terrain tyres, and flared and unpainted bumpers, giving it a distinct appearance and more overall flexibility over varying terrain. As the name "allroad quattro" suggests, Audi's Torsen-based quattro permanent four-wheel drive system was standard equipment for all versions.

The standard adjustable air suspension system can lift the car high enough to provide 208 mm (8 in) of ground clearance; a low-range mode (an option with manual transmission), absent from other quattro-equipped vehicles, can be selected with the touch of a button. When used together, the two systems made it possible for the allroad to complete an official Land Rover test-course, thus far it is the only car-based SUV that has been proven capable of doing so in testing. Conversely, the air suspension can lower the vehicle down to only 142 mm (6 in) above road level, and simultaneously stiffen the spring and damper rates to provide a sporty driving experience, much like that of the conventional A6 with the sports suspension.

Audi stopped production of the Allroad in July 2005. Although the model continued to be available for sale throughout 2006 in Europe, there was no 2006 model year for North America.

With the return of the "allroad" nameplate to North America, with the 2013 A4 allroad quattro, the C5-Platform allroad quattro has begun to take the name "Ur-allroad." The 'Ur-' is used in the German language, as a prefix to signify 'ancient' or 'early ancestor' (e.g.: great-grandmother is Urgroßmutter), and is used informally by car enthusiasts worldwide to refer to the original  Audi Quattro that was produced from 1980 - 1991 (the "Ur-Quattro"). The use of the term was then extended to the original S4 and S6 models to differentiate them from later models with the same name; and more recently to the C5 allroad models("Ur-allroad"). The need for differentiating the models is likely because many "Ur-allroad" owners feel that the new B8 A4 allroad, with its "small" 2.0T engine and lack of air-suspension, does not live up to the "allroad" nameplate and are reluctant to "accept" it. 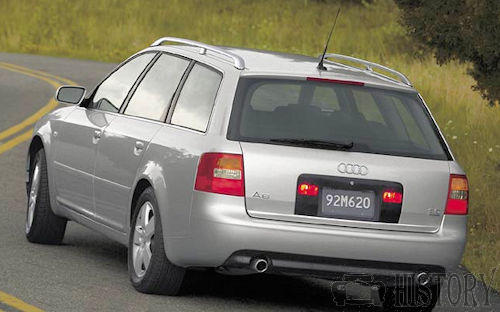