The Audi A5 (internally designated Typ 8T) is a coupé produced by the German automobile manufacturer Audi since 2007. It is the coupé, cabriolet, and "Sportback" (a four-door hatchback featuring a roof line with a steeply raked rear window with integrated trunk lid) versions of the fourth generation (B8) Audi A4 saloon and estate models.

The A5 marked Audi's return to the compact executive coupé market since the (B3/B4) Audi 80-based coupé model ended production in 1996. The B6/B7 A4 spawned a convertible variant but not a coupé. For the fourth generation A4 (B8), Audi decided to spin off the cabriolet, along with a new coupé and four-door hatchback, into a nameplate of its own as the A5.

The new A5 and B8 A4 were based on the Audi MLP platform (Modular Longitudinal Platform) which underpin the next generation A6 and A8.

The A5 is the third coupe in Audi's line-up, following the second-generation TT and the R8. The A5 adopted design elements of the Nuvolari quattro concept. The A5 debuted with the 3.2-litre FSI V6 engine delivering 195 kW (265 PS; 261 hp).

The design was based on Nuvolari quattro concept car. Audi A5 and S5 Coupé models were unveiled simultaneously in Salon International de l'Auto (Geneva) and Melbourne International Motor Shows on March 6, 2007.

Canadian models went on sale in 2008. Launch model included A5 3.2 FSI with choice of 6-speed manual or 6-speed Tiptronic transmission. Since 2011 only the 2.0 L Turbo engines are available for the A5 in Canada. 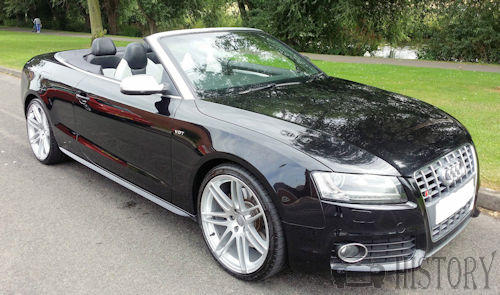 Audi A5 and S5 Cabriolet (convertible) production began in early 2009. The A5 Cabriolet included a fabric roof as opposed to a retractable hardtop as on the Volkswagen Eos. The engine ranges are same as contemporary A5 coupé models, but S5 Cabriolet came with a 3.0 TFSI V6 supercharged engine. The A5 Cabriolet replaces the A4 Cabriolet. Delivery of A5 Cabriolet began in the second quarter of 2009. The vehicle was unveiled in 2009 New York Auto Show. 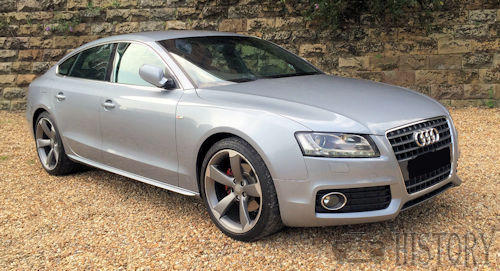 The A5 Sportback has four frameless doors and a long, tapering roofline, giving it a "coupé-like" appearance. While it shares many exterior cues with the A5 coupé, the Sportback's interior is similar to the A4 sedan; although all A5 models have same platform as the A4, the Sportback is closer in design to the A4 than the rest of the A5 family The Sportback has been described as "a sedan with the front end (including an identical S-line look) and taillights of the A5 coupe but the wheelbase of the A4", with the Sportback positioned more as the "designer's car" compared to the more conventional A4 sedan.

The Sportback model is available in Europe, Japan, Australia, New Zealand, Middle East, Mexico, and South Africa. It is not sold in the United States and Canada.

The A5 Sportback is available with two petrol engines or three diesel engines. 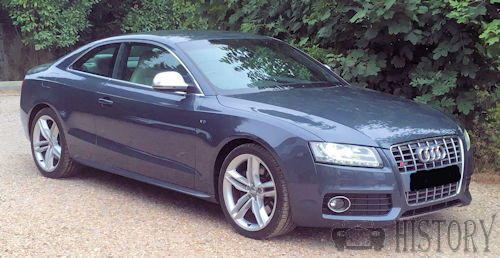 The Audi S5 was released in coupé form to the public at the same time as the A5. The Audi S5, in comparison to the A5, features a different fascia (as do most Audi S and RS models), including a string of LED daytime running lights around the bi-Xenon headlamps and a vertically striped chrome grille. In many markets, the S5 includes as standard, 19" alloy wheels with a five-parallel spoke design, bigger brakes, heated leather sport seats, and other convenience features, some of which are available only as an option on the A5. Changes for 2010 model year include LED tail lamps, the introduction of Premium Plus and Prestige trim levels, and new optional equipment such as Leather/Alcantara seats.

Despite sharing the same nameplate, the powertrains were different between the coupé and the Cabriolet/Sportback for the 2010–12 model years. The 2010–12 Audi S5 coupé had a 4.2 litre Fuel Stratified Injection (FSI) V8 engine that produces 260 kW (349 hp), while the S5 Cabriolet and Sportback have a supercharged 3.0 litre TFSI V6 engine producing 245 kW (329 hp) which is shared with the 2010 Audi S4 3.0 TFSI quattro sedan and avant. The coupé had a choice of either a 6-speed manual or 6-speed Tiptronic, while the Cabriolet/Sportback have the 7-speed S-tronic dual-clutch transmission. 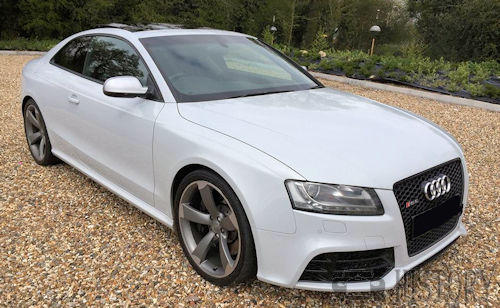 The Audi RS5, which is only available as a two-door coupé, was presented at 2010 Geneva Motor Show. Its availability coincided with the release of the facelifted Audi A5 models.

There are adjustments for ride comfort and driving dynamics. The RS5 also features an integrated boot lid spoiler that automatically deploys above 120 kilometres per hour (75 mph).

The RS5 weighs 1,800 kg (3,968 lb), with 56.3 percent at the front and 43.7 in the rear which makes it prone to understeer, however Audi has added two electro-mechanical systems to counter its nose-heaviness. The stability-control system attempts to stop front-end plow before it happens by squeezing the brakes on the inside wheels which effectively drag those tires enough to pull the car into the corner. The RS5 also has an active rear differential that can apportion power between the rear wheels to create a similar effect, or even oversteer; in normal conditions, quattro all-wheel drive delivers 60 percent of the engine’s torque rearward and rising to as much as 85 percent depending on conditions.

But if you opt for the cabriolet there are a number of changes over the fixed-roof car, including automatic front seat belt feeders, a wind deflector, LED interior lights and a roll-over protection system. The firm’s excellent Acoustic roof does a great job of cutting down un-wanted road and wind noise in the RS5 too, and can be opened and closed at speeds of up to 31mph.

The Aluminum A5 Coupé is a prototype vehicle demonstrating the aluminum Audi Space Frame (ASF) concept. It is based on Audi A5 Coupé 2.0 TFSI with 155 kW (211 PS; 208 hp) engine, but it uses the aluminum Audi Space Frame, aluminum and carbon fibre-reinforced plastics body. Punch riveting, bonding or laser-MIG hybrid welding replaced spot welding. The vehicle is 110 kg (243 lb) lighter than the equivalent steel-bodied production model.

The vehicle was built by Audi's Aluminum and Lightweight Design Centre in Neckarsulm. 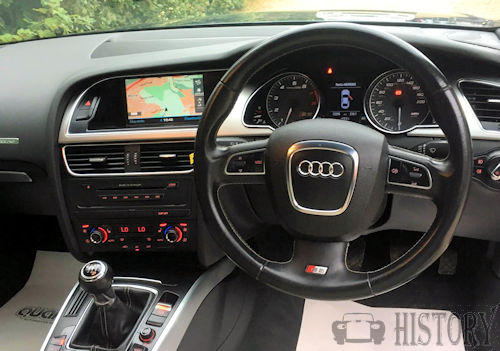 The basic equipment standard across all versions of the Audi A5 Coupé (2007-).

In 2009, Audi announced the 7-speed S Tronic transmission option for A5 with 2.0 TFSI quattro (155 kW) for the UK market, which replaced the 6-speed Tiptronic in the UK and Germany markets.

Beginning with the 2011 model year, the A5 2.0 TFSI quattro coupé and cabriolet includes 8-speed Tiptronic transmission option, replacing the 6-speed Tiptronic in the US and Canada markets.

For the S5 3.0 TFSI quattro (245 kW), the manual transmission was discontinued for the European market.

The Ethanol E100 Coupé clinched overall victory in the Michelin Challenge Bibendum 2010 eco rally over a distance of 350 kilometres.

Codenamed R17, the Audi A5 DTM is a race car designed for the DTM beginning in year 2012, replacing the Audi A4 DTM It includes a V8 engine rated at 340 kW (462 PS; 456 hp) with 6-speed transmission (from previous A4 DTM car), pneumatically operated using paddle shifters in the steering wheel, engine electronics (Bosch MS 5.1) and the central display from Audi R8 LMS, larger and wider tires from Hankook, 120-litre safety fuel tank inside carbon fiber cell, and a larger rear wing. The prototype was built by Audi Sport in Ingolstadt.

The vehicle was unveiled at the 2011 International Motor Show (IAA) in Frankfurt. The homologation of the A5 DTM was scheduled for March 1, 2012.

a Audi A5 Villain Driven by the villain in a car chase through Istanbul that precedes the film's opening titles. The car ends up flipped over and the villain continues his escape on a Honda motorbike.