In 1982, Ferdinand Piech signed an agreement with Aluminum Company of America. The objective was to design and develop a car that would be substantially lighter than any other vehicles in its class. In the late 1980s, it was decided that the target vehicle would be a successor to the V8(Typ 4C) flagship introduced in 1988. By 1991, a final design by Dirk van Braeckel was chosen and frozen for production in 1992. In September 1993, the Aluminum Space Frame (ASF) Concept was unveiled at the 1993 Frankfurt International Motor Show (IAA) as a D2 Typ 4D prototype in polished aluminum. Development ended in early 1994, at a total cost of $700 million.

The Audi A8 (Typ 4D) debuted in Europe in 1994, with full-scale factory production commencing June 1994, although it was not until the 1997 model year that it became available in North America. Unlike its predecessor, the Audi V8 model, which was built on an existing steel platform, the A8 debuted on the then-new Volkswagen Group D2 platform, an all aluminium monocoque, marketed as the "Audi Space Frame" (ASF), which helped to reduce weight and preserve structural rigidity. The saloon/sedan was offered in both the A8 (standard wheelbase), and the A8 L extended or long-wheelbase (LWB) version. The A8 L adds 5 inches (127 mm) of rear legroom. Updates to the car in 1997 included the addition of six interior airbags.

The A8 is available with standard luxury amenities, including dual-zone climate control, wood and leather interior trim, 14-way power and heated seats, and an enhanced Bose audio system. 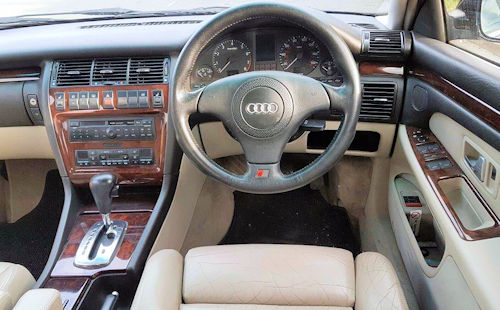 In 1999, Audi's flagship received new colours, and restructuring of option packages. The North American "warm weather package" added a solar sunroof which allows the interior ventilation fans to run, keeping the interior cool while the car is parked with the engine turned off. Changes to all models included a larger passenger-side mirror, and a first aid kit located in the rear centre armrest.

In 1999 for the 2000 model year saw a minor front-end restyle, with new, larger, clear headlights, a revised grille, and lower front valance with standard projection fog lamps. On the interior, the seats received a new, horizontal stitch pattern. Also, the 3.7-litre V8 FWD model was dropped, leaving the 2.8 V6 model and the long-wheelbase and short-wheelbase 4.2-litre quattro. These restyled cars also featured revised external door handles and an integrated radio antenna. For 2000, the North American A8 line-up was expanded to include the A8 L.

For 2001, A8 received side curtain airbags. In 2001, Audi introduced its new W12 engine, a compact 6.0-litre unit developed by effectively mating two VR6 engines together at the crankshaft. The engine quickly became available in the A8, though only to European and Asian customers. From its introduction through its discontinuation in 2003, only 750 of the D2 "W12" models were produced. 2001 also marked the debut of the high-performance S8 variant in North American markets.

In 2002, the A8 L received standard xenon high-intensity discharge lamp (HID) headlights, and a heated steering wheel. A tyre pressure monitoring system (TPMS), an updated Symphony II stereo, and new exterior colours were also added. For 2002, all A8 variants received a trunk/boot interior release lever to facilitate escape in the event an individual became trapped within.

In 1997, IVM Automotive of Munich, Germany built a two-door Audi A8 Coupé. The car was unveiled at the 1997 Geneva Motor Show. Audi contracted IVM to build the prototype, and was considering production of the vehicle. The coupé had a re-engineered aluminium body, shorter than the production A8 saloon. Like the Mercedes-Benz CL-Class, there was no central "B" pillar, giving the car a seamless design with a gradually sloping roofline. The car included custom leather seats which could seat four. Ultimately, Audi decided not to put the A8 Coupé into production, citing lower-than-expected sales figures for the similar BMW 8 Series and Mercedes-Benz S-Class Coupé. Only one A8 Coupé was ever built. The single prototype, painted a colour called "Ming Blue pearl", remains the property of IVM Automotive, and resides in Munich. Its last public appearance was in 2002 on a series of test drives.

Audi introduced the S8 4.2 quattro into the European market in 1996. The S8 followed the naming convention of other high-performance Audi "S" models such as the Audi A6-derived S6 and was similar in vein of Mercedes-Benz AMG models. In markets such as the UK, the S8 was only available with the automatic transmission. Cosmetically, Audi differentiated the S8 from the A8 with solid aluminium alloy door mirror housings, chrome-effect beltline and lower front grille trim, and polished twin exhaust pipes, along with subtle "S8" badging. 14-way power adjustable and heated sports front seats with memory function were fitted as were heated rear seats. Standard alloy wheels were 18-inch cast aluminium alloy "Avus" six-spoke style. After the 1999 facelift, 20-inch polished nine-spoke RS wheels became an option. In 2002, 18-inch nine-spoke RS wheels became a no-cost option.

At the same time of the A8's facelift in late 1999, the S8 received the same cosmetic upgrades. This update marked the release of the S8 to the North American market. Production of the D2 series S8 ended in September 2002.

The D2 series S8 featured an uprated, 250 kW (335 hp) version of the 4.2-litre V8 with four valves per cylinder. From late 1999, Audi increased this to five valves per cylinder with power increased to 265 kilowatts (355 hp) and 430 newton metres (317 lb·ft). From launch in 1996, European-market models came standard with a six-speed manual transmission. A sports-recalibrated version of the ZF 5HP24 five-speed tiptronic automatic, featuring "Dynamic Shift Programme" (DSP) was released a year later and was the only transmission available in most other markets.