The Typ 4F A6 was released in 2004. Designed by Walter de'Silva, this model was visually an evolution of the C5, but was lengthened to 4,927 millimetres (194.0 in), and incorporates the new Audi trademark "single-frame grille". Like other contemporary Audis, the A6 had a "tornado line" that ran just below the sheetmetal's shoulders and joins the front and rear light clusters.

The C6 iteration of the A6 features more sophisticated technology. Most notable is the Multi Media Interface (MMI), which is a system controlling in-car entertainment, satellite navigation, climate control, car settings such as suspension configuration and optional electronic accessories through a central screen interface. This has the advantage of minimising the wealth of buttons normally found on a dashboard by replacing them with controls which operate multiple devices using the integrated display.

On the internal combustion engines, the new Fuel Stratified Injection (FSI) direct injection technology was introduced. Although the line of engines represents the same progression as the former model, all engines were new. The multitronic continuously variable transmission continues as an alternative for front-wheel drive models, alongside a new six-speed tiptronic automatic transmission available in the four-wheel drive models. Audi's "trademark" Torsen-based quattro permanent four-wheel drive is available in most of the lineup, and standard in the most powerful models. quattro is not available on the multitronic variants of the A6, but is available on the manual and tiptronic gear systems. Conversely the tiptronic system is not available on the front-wheel drive variants of the car. The six-speed manual gearbox is available with the 3.2-litre V6 engine, but not for the North American market.

The Avant arrived during the course of 2005. The A6 allroad quattro made its debut in 2006, and as before, is an off-road ready version of the Avant, available with either a 2.7-litre V6 or 3.0-litre V6 Turbocharged Direct Injection diesel engines, or a 3.2-litre V6 or 4.2-litre V8 petrol engine.

It is a long wheelbase version of A6 sedan for China market. The vehicle was unveiled in 2005 Shanghai Motor Show. 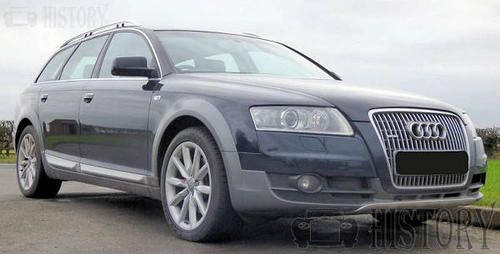 Audi announced the C6 series allroad in the spring of 2005 and released it in the summer of 2006. This model was called the Audi A6 allroad quattro (unlike the previous version, which was merely called Audi allroad quattro, with no reference to the A6 nomenclature).

The 6-speed tiptronic transmission system converted high-torque engine power into both sporty performance and operating convenience, with crisp, fast gear changes. Advanced electronics respond efficiently to all driver input in both D (Drive) and S (Sport) programmes, helping to prevent unwanted upshifts when cornering. The five-mode air suspension can be raised by up to 60 mm (2.36 in) to provide ground clearance of 185 mm (7.28 in) which is better than the older four-mode.

The car featured a number of off-road styling cues including larger bumpers and sills.

In some European markets, this A6 allroad quattro was more expensive than the larger Audi Q7, but air suspension is an expensive option in the Q7. In its native country, Germany, it cost a few hundred Euros less than the Q7.

In 2005, the A6 won the World Car of the Year award, and has also won the Practical Caravan "Towcar of the Year" awards, due to its array of towing features such as adjustable suspension height and damping, and the presence of a Trailer Stability Programme.

Audi unveiled a facelifted "C6" Audi A6 on 12 August 2008, at the Moscow International Motor Show. The refresh incorporates some modern Audi design cues to keep the A6 current with the rest of the Audi lineup.

There are minor cosmetic changes to the front and rear lights which now have daytime running LEDs, the taillights extend towards the center of the trunk lid and pinch off at the license plate mount, however their shape remains rectangular compared to the more sculpted light clusters found in the 2008 Audi A5, 2009 Audi A4, and 2009 Audi Q5 (the latter three being all-new generations).

The intakes below the headlamps are inspired by the Audi RS5.The A6's six (per side) front light-emitting diode (LED) daytime running lights (DRLs) are located within the main headlamp housing, similar to RS6's placement of the LEDs (ten per side), whereas on the S6 these front LEDs (five per side) are found adjacent to the fog lamps in the lower front bumper.

The new front and rear fascias from RS6 would be used on the facelifted A6 and S6 lineup.

Also updated for 2009 is the Quattro all-wheel drive setup, which is already found on the 2008 Audi A5 and 2009 Audi A4. This new system features a 40/60 front-to-rear torque split and offers a more balanced feel, reducing the understeer that comes from 50/50 AWD platforms

There are now six petrol and four diesel engines available for the upgraded A6 All petrol engines now feature cylinder-direct Fuel Stratified Injection (FSI) technology, and all diesel engines now feature common rail (CR) and Turbocharged Direct Injection (TDI) technologies. There is a new petrol engine, a 300 PS (221 kW; 296 bhp) 3.0-litre supercharged V6, badged as 3.0 TFSI or 3.0T. This new engine is shared with the 2010 Audi S4 and S5 Cabriolet, although in the latter two applications in a higher state of tune and mated to a 7-speed S-tronic dual-clutch transmission.

The new engine and revised quattro system give the 2009 Audi A6 3.0 TFSI almost equivalent performance to the Audi S6 5.2 FSI (which is unchanged except for receiving the cosmetic tweaks like the rest of the Audi A6 lineup). Moreover, the S6's weight is 4,500 pounds and 59 percent of weight is distributed to the front which increases understeer. 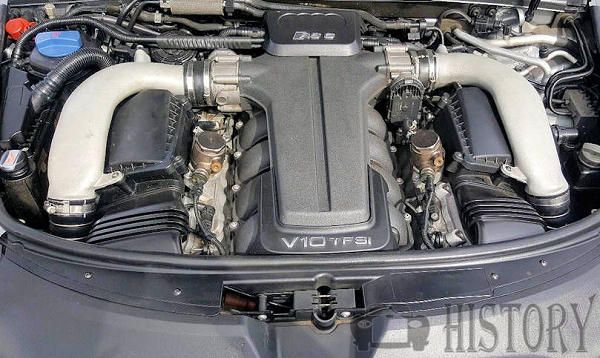 The latest version of ultra-high-performance Audi RS6 was launched in September 2008 and produced until the third quarter of 2010. Based upon the V10 engine powering the S6, the RS6 features an all-aluminium alloy 4,991 cc (304.6 cu in) V10 twin-turbocharged, Fuel Stratified Injection engine with a dry sump lubrication system. It produces a power output of 426 kilowatts (579 PS; 571 bhp), and 650 newton metres (479 lbf·ft) of torque, making it the most powerful vehicle ever produced by Audi.

Initially available only as an Avant, the saloon version went on sale in mid-October 2008.