The B8 A4 is built on a variant of the Audi Modular Longitudinal Platform, a platform which is also used in the Audi A5 coupé. Whilst prior A4 chassis were limited in wheelbase due to the relationship between the engine, transmission and front axle, the MLP allows for a reduced front overhang, resulting in a greater wheelbase length without the same increase in overall length. This effectively redistributes the centre of gravity slightly rearwards, improving handling by better balancing vehicle mass between the front and rear axles. The estimated static front:rear weight ratio of the B8 A4 is approximately 55:45, depending on body style and engine. The relocation of the steering rack in front of the axle also improves handling over previous A4 platforms.

The B8 A4 has increased in wheelbase by 160 millimetres (6.3 in) and in length by 117 millimetres (4.6 in) over the prior B7, which has allowed for increased rear seating legroom. Although the overall dimensions have increased, the kerb weight has dropped some 10%. The boot (trunk) has also increased to 480 litres (17.0 cu ft) for the saloon (sedan) version. The A4 Avant will have a maximum capacity of 1,430 L (50.5 cu ft) with the rear seats folded down.

Reception has been mixed, with praise for the Audi A4's increased size, giving it best-in-class rear legroom and trunk space in the compact executive car segment. Its inline-4 2.0 TFSI engine, while efficient providing plenty of torque, was considered lacking and less refined compared to 6-cylinder engines of lighter rivals who posted faster acceleration times. However, the Audi S4 sports sedan has been well-received for its V6 3.0 TFSI engine's power and efficiency.

Audi released the first official pictures of the B8 series A4 in August 2007, and unveiled the car to the public at the September 2007 Frankfurt Motor Show. Saloon/sedan and Avant (estate/wagon) models are offered.

The Avant was unveiled to the public at the March 2008 Geneva Motor Show.

The A4 allroad quattro was made available in early summer 2009.The car was unveiled in 2009 Geneva Motor Show.

The A4-based convertible models were replaced by the A5/S5 Cabriolet. 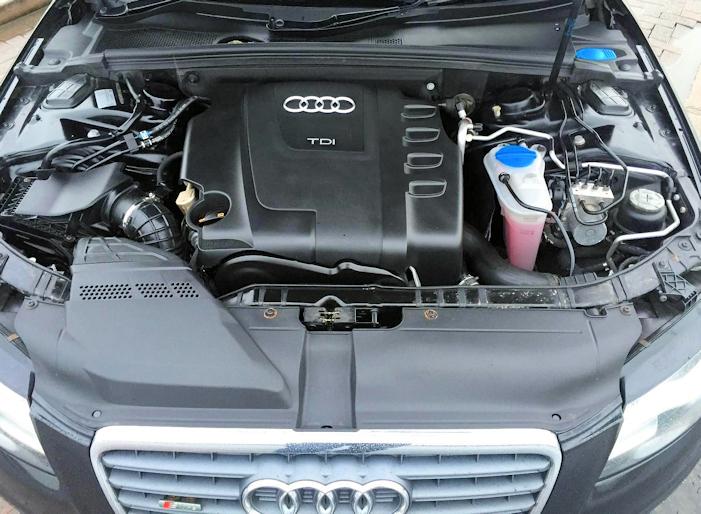 All petrol engines use Fuel Stratified Injection (FSI), and all diesel engines use the common rail fuel delivery (with a pressure of 1,600 bars (23,000 psi)), with piezo injectors of their Turbocharged Direct Injection engines.

In 2009, Audi announced the seven-speed dual-clutch S tronic transmission as option for A4 in UK and European markets.

Standard equipment on the B8 A4 includes:

The car was unveiled in Paris Motor Show.

During a model cycle changes are made to integrate new technologies and to keep the model competitive. These changes are referenced based on the model year (MY) of the car. In Australia, the B8 has undergone 2 revisions leading to three variants, the B8, B8 MY10  and B8 MY11.

The new facelifted A4 features redesigned LED headlamps and tail lights, front air dam with fog lamps, and closely set twin exhausts. Interior changes include a three-spoke steering wheel and a redesigned ignition key. Controls for air-conditioning, infotainment, and power windows gain chrome clasps. The A4 includes radio with eight speakers as standard, while MMI navigation system with voice dialogue is optional. A new "Drive Select System" allows drivers to choose comfort, dynamic, individual, or efficiency modes for fuel efficiency. Power output of the 1.8 TFSI engine is 170 BHP and 320 Nm of torque – up 10 BHP and 70 Nm from the previous versions. Electro-mechanical power steering is standard.

In 2009, Hohenester Sport announced its modified HS 650 Audi B7 A4 quattro had set a new world speed record of the fastest biogas-powered car of 364.6 km/h (226.6 mph) at the test track in Papenburg, Lower Saxony, driven by Jürgen Hohenester. The vehicle includes a 3.0 litre twin-turbo V6 engine, with electronically limited 700 PS (515 kW; 690 bhp) rating. 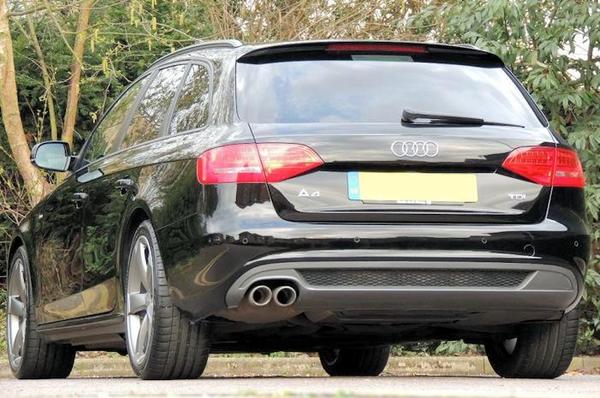