In September 1986, Audi released a new Typ 89 Audi 80 for the 1987 model year on the European market and introduced it elsewhere within a year. It was based on a new platform which broke the relationship with the Volkswagen B-series platforms, not being the same as the Passat's B3 platform. Although often called the B3 even among knowledgeable Audi enthusiasts, the official and correct nomenclature was its production code Typ 89 from 1987 to 1989, and Typ 8A from 1990 onwards. It introduced a new aerodynamic look and a fully galvanised bodyshell. This was the first mid-sized car to feature a fully zinc-coated body, giving it longevity and durability against corrosion perforation. This protective shield proved to be so effective that Audi extended its corrosion perforation warranty from the originally offered ten years to twelve years (during early pre-production, the body was expected to be good for only eight years). Audi still uses zinc galvanisation for all current steel-bodied models.

Unlike its predecessor, the B3 was marketed worldwide only as the Audi 80 or Audi 90. For the most part, Audi transferred existing powertrain concepts to the new model, although fuel injection was now available for some engines. A range of new petrol and diesel inline four-cylinder engines became available to European customers along with the procon-ten safety system which became standard fitment from 1991.

In 1987, the inline five-cylinder Audi 90 was reintroduced as an upmarket, more luxurious variant of the 80. The 90 differs visually by the full width tail-light panel; headlights which featured additional high-beam lights and a slightly different front grille. The most obvious visual difference between the 80 and 90 are the indicators, which are moved from beside the headlights to the bumpers next to the fog lights, which were standard fitment on the 90. From 1989 to 1991 the 90 also offered the first 20-valve engine from Audi since the turbocharged engine used in the Audi Sport Quattro. This engine produced 170 PS (130 kW; 170 bhp) and featured in the front wheel drive 20V, 20V Sport and four-wheel drive 20V quattro derivatives. The non-quattro 20V models were 120 kg lighter.

The United Kingdom and Europe had similar versions: the Volkswagen Group wanted to ensure consistency across all markets, so the trim levels were similar. However, in North America, the range was more limited: a choice of 2.3 E and 2.3 quattro were available from 1988 to 1992.

With the 1988 model year, a new two-door Coupé was introduced in Europe, known internally as the Typ 8B; basically a B3 saloon with a shortened wheelbase, modified rear suspension and a new front suspension system that previewed what was to come in the B4 Audi 80. It came with the 115 PS (85 kW; 113 bhp) 2.0E as well as the 10-valve and 20-valve 2.3E engines. It later served as a basis for the B4 Coupé and Cabriolet (Typ 8G). These models dropped the "80" appendage and were simply known as Audi Coupé and Audi Cabriolet. Because of the heavy re-engineering involved in the cabriolet version, this model was essentially carried on until the year 2000, long after the other B3 models had been replaced by B4 and even B5 vehicles.

In 1989, for the 1990 model year, North America received the Coupé quattro and 90 quattro models that all were powered by a detuned 164 hp (122 kW; 166 PS) of the 20v 2.3 L 5-cylinder engine. These cars were considered to be in the "Grand Tourismo" (GT) style of a comfortable luxury car with sporting tendencies, as opposed to a dedicated lightweight sports car. Weighing between 3,042 lb (1,380 kg) (1990 saloon/sedan model) to 3,308 lb (1,500 kg) (1991 Coupé model), these cars were not lightweight, especially in consideration of the 164 hp powerplant (slightly de-tuned from the European version). These models can be recognised by their distinctive roadwheels (Coupé quattros had 15" 6-star "Speedline" wheels, sedan quattros had 14" BBS Mesh wheel or the 15" Speedlines). They differed from regular 80/90 models in several ways. Notable differences include their standard leather interiors with Zebrano wood trim, additional VDO gauges mounted in the bottom of the centre console, a carbon fibre centre drive shaft, and push-button locking rear differential. The Coupé quattro is visually similar to the European-only S2 model, but does not have the S2's turbocharged engine. 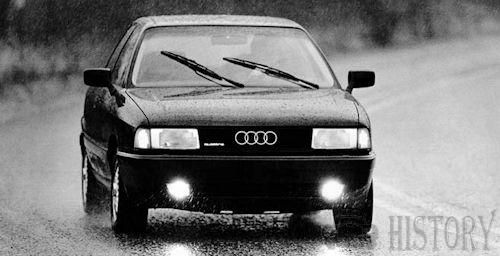 Altogether, the Audi 80 came with the following engine range, although not all of these were available outside Germany: 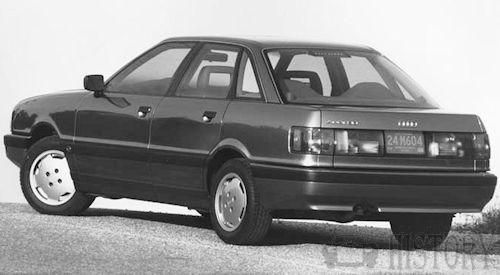