Edging out the Ford Sierra as the 1983 European Car of the Year, the 1983 Audi 100 had a remarkably aerodynamic look, achieving a drag coefficient of 0.30 for its smoothest base model. The increased aerodynamic efficiency resulted in better fuel economy and consumers all over the world were waking up to this fact. This became a great marketing tool for Audi in the 1980s, and marked a huge leap forward from the boxy shape of the C2, as well as the technology it introduced, including the procon-ten safety system.

Audi was able to follow up on the modern smooth look first seen in this segment on the 1967 NSU Ro 80 and popularised by the 1974 Citroën CX. This rounded look became the norm by the 1990s. It also set a styling trend of flush wheel covers, a thick black side door moulding and blacked out window frames eventually adopted by a range of cars from the 1984 Honda Accord to the Chrysler K cars. Audi innovated flush windows on the C3, a key area for aerodynamic drag that has been adopted by virtually all manufacturers today.

The two-door models were no longer available, and the Audi 100 Avant was reintroduced as Audi's first attempt at a station wagon based on the 100. The 200 continued as the upmarket variant with several versions of the 2.2 L turbo 5-cylinder available in different markets over its life ranging in power outputs from 165 PS (121 kW) MC engine, through the 200 PS (147 kW) versions to the final 220 PS (162 kW) 20-valve 3B engine available from 1991. The MC turbo engine was available in the 100 as well for some markets.

The 1991 200 20V was distinguished by its flared front and rounded rear wheel arches instead of the flat type used for the rest of the 100-200 range, this allowed wider wheel and tire combinations to be fitted to 20v models. For many markets, the 20v Audi 200 gave customers a taste of performance levels that would later be seen in the C4-Chassis Audi S4, and S6. US Magazine articles of the period reported 0-60 times of the 20v Audi 200 under 7 seconds, with 1/4 mile times in the mid to upper 15 second mark.

The 100 also featured a 2.5 L straight-5 direct injection turbo-diesel (TDI) model with 120 PS (88 kW) introduced in 1990 (engine code 1T). A such-engined Audi 100 was the very first model to wear the now ubiquitous and hugely successful TDI label that changed the perception of diesel engines all over the world.

During model years 1982–1987, Audi's U.S. sales fell after a series of recalls of Audi 5000 models associated with reported incidents of sudden unintended acceleration linked to six deaths and 700 accidents. At the time, National Highway Traffic Safety Administration (NHTSA) was investigating 50 car models from 20 manufacturers for sudden surges of power.

60 Minutes aired a report titled Out of Control on November 23, 1986, featuring interviews with six people who had sued Audi after reporting unintended acceleration, including footage of an Audi 5000 ostensibly displaying a surge of acceleration while the brake pedal was depressed. Subsequent investigation revealed that 60 Minutes had not disclosed they had engineered the vehicle's behavior – fitting a canister of compressed air on the passenger-side floor, to pump fluid via a hose to a hole drilled into the transmission– the arrangement executed by one of the experts who had testified on behalf of a plaintiff in a then pending lawsuit against Audi's parent company.

Audi initially responded by suggesting that the drivers of the cars involved in the incidents were at fault, because they had stepped on the accelerator pedal rather than the brake. Subsequently, the National Highway Traffic Safety Administration (NHTSA) concluded that the majority of unintended acceleration cases, including all the ones that prompted the 60 Minutes report, were caused by driver error such as confusion of pedals.CBS did not acknowledge the test results of involved government agencies, but did acknowledge the similar results of another study. Audi's research demonstrated that many of the drivers who encountered "unintended acceleration" were "below average in height".

With the series of recall campaigns, Audi made several modifications; the first adjusted the distance between the brake and accelerator pedal on automatic-transmission models. Later repairs, of 250,000 cars dating back to 1978, added a device requiring the driver to press the brake pedal before shifting out of park. As a byproduct of the Audi scare, vehicles now include gear stick patterns and brake interlock mechanisms to prevent inadvertent gear selection.

Audi’s U.S. sales, which had reached 74,061 in 1985, dropped to 12,283 in 1991 and remained level for three years. – with resale values falling dramatically. Audi subsequently offered increased warranty protection and renamed the affected models – with the 5000 becoming the 100 and 200 in 1989 The company only reached the same level of U.S. sales again by model year 2000.

As of early 2010, a class-action lawsuit – dealing with a charge that on account of the sudden acceleration controversy, Audi models had lost resale value – filed in 1987 by about 7,500 Audi Audi 5000-model owners remains unsettled and is currently contested in county court in Chicago after appeals at the Illinois state and U.S. federal levels.

As of late 1988, the Audi V8 was available. Although styling was similar to the 200, the V8 had different chassis and body. The V8 was available as a 3.6 L or a 4.2 L engine. It was the first quattro model to have an automatic gearbox, featuring a ZF four-speed unit with an electronically controlled multiplate clutch centre differential, combined with a Torsen rear differential. The manual gearbox quattro's across the range continued with a conventional rear differential (lockable at low speeds), and the Torsen centre differential (manual transmission V8 quattros had Torsen differentials in both the centre and the rear). The 5000 S/Turbo was on Car and Driver's Ten Best list for 1984 and 1985. The CS Turbo quattro was on that list for 1986 through 1988. 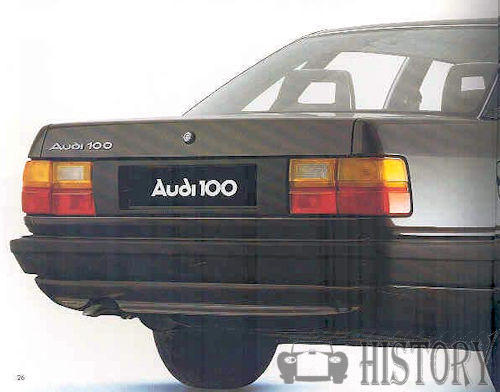 In 1988, after years of rallying, Audi would enter the Trans-Am Series with the 200 turbo quattro via the services of Bob Tullius's Group 44 Racing. As usual the car ran their trademark Quattro system. However this did not run without controversy as the car, piloted by Haywood and with both Walter Röhrl and Hans Joachim Stuck sharing duties, steamrollered the opposition taking eight out of thirteen wins. As Audi would defect to IMSA by the end of the season, the SCCA would change the regulation to a two-wheel drive only and banning cars with non American engines from taking part. The Historic Trans-am & IMSA Group is dedicated to the preservation of the cars that ran in the SCCA Trans-am series and the similar IMSA GTO class from 1980 until 1991.