Audi released the C4 (a heavily revised C3) in 1991. The C3-platform Audi V8 continued to be sold as a separate line. The major change for the C4 was the introduction of a 2.8 L, 90-degree, SOHC 12v, V6 engine. It was later joined by a 2.6 L variant, of the same configuration as the 2.8 L unit. They are essentially the same engines offered in the 1992, B4 Audi 80. The option of quattro permanent four-wheel drive was an option across the range, and the Audi 100 quattro was available with a ZF four-speed automatic gearbox.

For the 1995 model year, in conjunction with some styling revisions, Audi dropped the Audi 100 tag, renaming it the A6 instead. In addition, the existing 100-derived Audi S4 became the S6. The S4 name was later re-used for the high-performance derivative of the Audi A4. The Audi V8 had been replaced by the A8 in 1994. 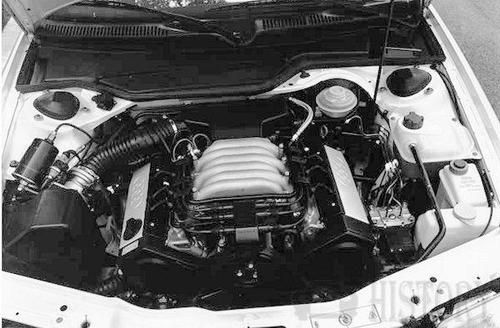 In addition to the C platform codes, Audi assigned type numbers to their models:

The C3-platform Audi 100 was also produced in Changchun, China, by FAW (First Automobile Works, a Chinese automotive manufacturer), for many years during the 1990s. Since most products are for governmental usage, all of China-made 100s are front-wheel drive sedans with a 2.0 L 4-cylinder engine or a 2.3 L 5-cylinder one.

In 1990, Political Bureau of the Central Committee of the CPC approved a resolution to circumscribe car import and the engine displacement of cars equipped to officials. Furthermore, the resolution also prescribed that all cars of central departments of both Party and government must be homemade ones. As the most luxurious and advanced cars made in China in early-1990s, FAW-Audi 100 and 200 have possessed a considerable percentage in Chinese high-class market of executive cars for nearly one decade, until the C3-platform cars was replaced by Audi A6 in 1999.

During the negotiation between FAW and Volkswagen in late-1980s, Volkswagen acceded to FAW's suggestion of combining the C3 platform with previously introduced Chrysler engines in the new generation Hongqi (Red Flag). Hongqi CA7200 series with the technology of C3 were launched in mid-1990s, while most of C3 Audi 100 parts could be made in China. CA7200 were initially equipped with Chrysler 2.0 L or 2.2 L 4-cylinder 488 engines, whose product line was introduced into China in 1987. In 2000s, new Nissan VQ20 engines replaced the original 4-cylinder petrol engine.

A small number of C3 200s (with 1.8T or 2.6 V6 engine) and some early C4 100s (largely in European style but with tail lights in American style) were also assembled in Changchun.

At the Geneva Motor Show in March 1990Audi presented its first iteration of the Audi Duo (or Audi 100 Avant Duo) experimental vehicle, a plug-in parallel hybrid based on the Audi 100 Avant quattro. This car had a 12.6 bhp (9.4 kW) Siemens electric motor which drove the rear wheels. A trunk-mounted nickel-cadmium battery supplied energy to the motor that drove the rear wheels. The vehicle's front wheels were powered by a 2.3-litre five-cylinder engine with an output of 136 PS (100 kW; 134 hp). The intent was to produce a vehicle which could operate on the engine in the country and electric mode in the city. Mode of operation could be selected by the driver. Just ten vehicles are believed to have been made; one drawback was that due to the extra weight of the electric drive, the vehicles were less efficient when running on their engines alone than standard Audi 100s with the same engine.

In late 1991,Audi unveiled the second Duo generation – likewise based on the Audi 100 Avant quattro. Once again this featured an electric motor, a 28.6 PS (21 kW; 28 hp) three-phase machine, driving the rear wheels. This time, however, the rear wheels were additionally powered via the Torsen differential from the main engine compartment, which housed a 2.0-litre four-cylinder engine.