Auburn golden era, which included the most successful Auburn the 851 introduced in 1935.

The car had a side-valve, water-cooled, in-line 4590 cc eight-cylinder Lycoming engine which developed 84.5kW (115hp), or 110.3kW (150hp) when supercharged. It had an aluminium cylinder head and a cast-iron engine block. Hydraulic brakes operated on all four wheels. The rear axle was driven via a three-speed gearbox and a propeller shaft.

The Auburn 851 Speedster of 1935 was styled by designer Gordon Buehrig, who also was responsible for the Cord Model 810. The frame chassis was underslung on semi-elliptic leaf springs. The car had a maximum speed of 160km/h (100mph).

The last Auburn model, with a 12-cylinder engine, was produced in 1937, After that, cord closed the company down. 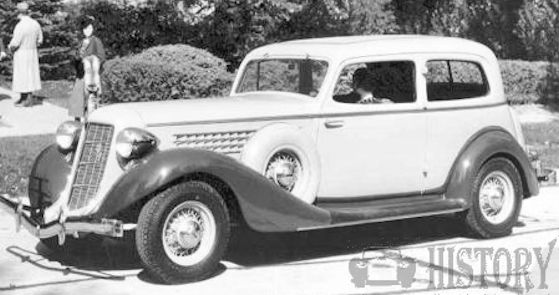