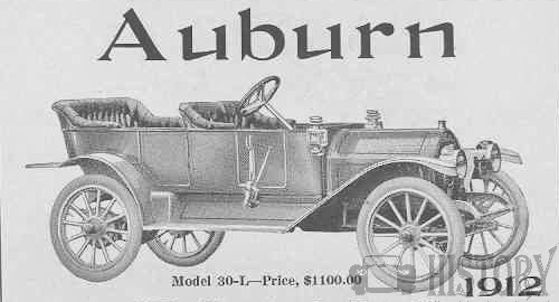 The original company was established in 1877 by a German emigrant, Charles Eckart. The factory was named after Auburn, Indiana, where it was established. Eckart's sons, Frank and Morris, at first made twin-cylinder models, but then focused on large capacity four and six-cylinder engines. However, the cars were a commercial failure, and the factory was turned over to William Wrigley.
The company's situation was improved in 1924 when Auburn was bought by Erret Lobban Cord. At the age of 29, this ambitious entrepreneur became president of an enterprise which incorporated the Auburn, Cord, and the Duesenberg trademarks.

They first experimented making automobiles by the early 1900s.The 1904 Auburn was a touring car model. Equipped with a tonneau, it could seat two or four passengers and sold for US$1000. The flat-mounted single-cylinder engine, situated at the center of the car, produced 10 hp (7.5 kW). A two-speed planetary transmission was fitted. The angle-steel-framed car weighed 1,500 lb (680 kg) and used half-elliptic springs. With the success of these early cars expansion began taking over two other local carmakers and moving into a larger plant in 1909 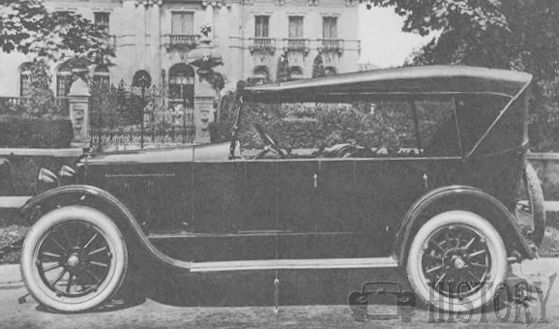 The Beauty-Six used the same chassis as the previous Auburn models, but its more chiseled body styling and integrated radiator shell gave it a more sporting look.

In 1919, the Eckhart brothers sold the company to a group of Chicago investors headed by Ralph Austin Bard, who later served as Assistant Secretary of the Navy for President Franklin Delano Roosevelt and as Undersecretary of the Navy for President Roosevelt and for President Harry S. Truman. The new owners revived the business but failed to realize their anticipated profits and in 1924, approached Errett Lobban Cord, a highly successful automobile salesman, with an offer to run the company. Cord countered with an offer to take over completely in what amounted to a leveraged buyout and the Chicago group accepted. Cord aggressively marketed the company's unsold inventory and completed his buyout before the end of 1925.

But styling and engineering failed to overcome the fact that Cord's vehicles were too expensive for the Depression-era market and Cord's stock manipulations would force him to give up control of his car companies. Under injunction from the U.S. Securities and Exchange Commission to refrain from further violations, Cord sold his shares in his automobile holding company. In 1937, production of Auburns, along with that of Cords and Duesenbergs, ended. 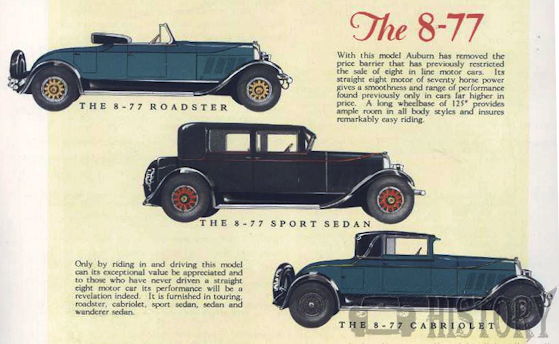 In 1926, Cord, now the owner of Auburn, partnered with Duesenberg Corporation, famous for its racing cars, and used it as the launching platform for a line of high-priced luxury vehicles. He also put his own name on a front-wheel-drive car, the Cord, later referred to as "L-29".

Employing imaginative designers such as Alan Leamy — chief designer of the 1933 Auburn Speedster, and Gordon Buehrig, who modified leftover bodies to produce the 1935 851 Speedster and modified the four-door, Cord built cars such as the Duesenberg Model J (1928–37), the Auburn Speedster (1935–37), and the Cord 810/812 (1936–37) that became famous for their advanced engineering as well as their striking appearance. The Auburn Boattail Speedster was powered by a 4.6L straight eight that, with the popular supercharger option (150 hp), could top 100 mph (160 km/h) making it a popular model in the Hollywood market.

The Depression, coupled with Cord's stock manipulations, spelled the end of the company and production ceased in 1937. The company's art deco headquarters in Auburn now houses the Auburn Cord Duesenberg Automobile Museum and became a National Historic Landmark in 2005. The Auburn Automobile Company also had a manufacturing plant in Connersville, Indiana, formerly owned by the Lexington Motor Company.