The Aston Martin Cygnet is a microcar of the British car manufacturer Aston Martin . The official launch took place at the 81st Geneva Motor Show 2011.

The Cygnet was the first and so far only microcar of Aston Martin. Technically, this was based on the Toyota iQ with diffrent options such as rear spoiler and diffuser led tail lights 16" alloys . Aston Martin decided to produce such a vehicle model for two key reasons.

Owners of an Aston Martin sports car should be able to move around the urban environment with a luxurious and tailor-made car. In order to determine the need for such a vehicle, the manufacturer contacted his customers directly. The response was positive, so it was decided to realize the Cygnets. Aston Martin also has an extremely high fleet consumption . The Cygnet was thus with its CO 2 emissions of 116 g / km (with 6-speed manual) fuel consumption of 58.9 mpg an effective tool to reduce fleet consumption.

Contrary to initial considerations on the part of Aston Martin - and unlike previous press reports - the Cygnet could be purchased by anyone interested and was avaliable in left or right hand drive. However, anyone who already owned an Aston Martin should be given preference.

For the Cygnet, the entire Aston Martin paint and customization range was available. For example, the customer was able to refine the interior with the same contrast stitching and decorative trim, as well as the same leather and Alcantara including the headliner , which also lined the big Aston Martin features also included key less entry and start, 9 air bags fitted heated and retractable mirrors. 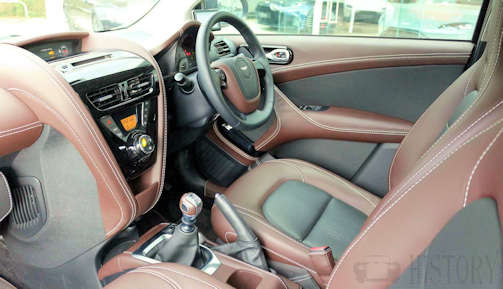 In September 2013, the production of the Cygnets was discontinued due to the inadequate sales after only two years. Instead of the planned 4000 vehicles per year, only 143  in the UK and 593 in total  .