The Aston Martin 2-Litre Sports was a sports car sold by Aston Martin from 1948 to 1950. It was the first product of the company under new owner, David Brown, and is retrospectively known as the DB1. The car debuted at the 1948 London Motor Show and was based on the Aston Martin Atom prototype. Just 15 were sold.

The well-established but always precarious Aston Martin company underwent change of ownership (by no means the first) in 1947, with its acquisition by industrialist David Brown. Claude Hill, Aston's Chief Engineer, already had a new postwar design on the stocks when this management change took place and his car was introduced as the DB 1, taking David Brown's initials. The DBI used a four-cylinder pushrod overhead-valve engine of 1970 cc which developed around 90 bhp. It had independent front suspension and was available both as a drophead coupé and as a sports tourer. In 1949 a 2580 cc twin-overhead-camshaft six cylinder Lagonda engine was mounted experimentally in a DBI chassis frame and in the spring of 1950 this hybrid model entered production as the Aston Martin DB2. 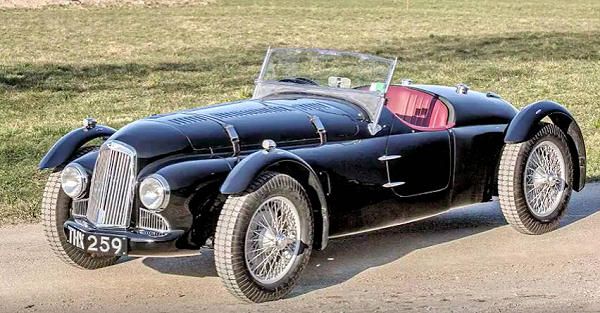 The Atom was an Aston Martin project developed during World War II. Its tube-frame chassis and 2.0 L four-cylinder engine were developed by Claude Hill.

Shortly after David Brown purchased Aston Martin, construction began on an updated version. This prototype was entered at the 24 Hours race at Spa in 1948 as a way of testing its durability, and the car won the race outright with drivers St. John Horsfall and Leslie Johnson. The Spa car was rebuilt and shown at the London Motor Show as an example of a new "Spa Replica" series for public sale, but there were no takers. The single Spa car has been until recently kept in the Dutch Motor Museum. In 2006 it returned to the UK and has been fully restored.

Along with the cycle-fender Spa car, Brown directed Aston to build a 2-seat roadster with a more conventional body for the London show. This 2-Litre Sports, as the name suggested, used the 2.0 L Claude Hill engine. This 90 hp (67 kW) unit could propel the small, light vehicle to 93 mph (150 km/h).

13 of the cars wore an open roadster body, as shown in London, complete with a 3-part grille suggesting the later Aston Martin design. One unique feature of these cars was the compartment in one front wing for the spare wheel. One more 2-Litre car was shipped as a chassis for custom coachwork.

After the 1950 introduction of the replacement DB2, with the W. O. Bentley designed Lagonda straight-6 engine, the 2-Litre Sports became known widely as the DB1. At this point only 12 had been produced, however since the DB2 was a hardtop and a customer wanted a softtop, chassis numbers 13,14 and 15 were produced to special order 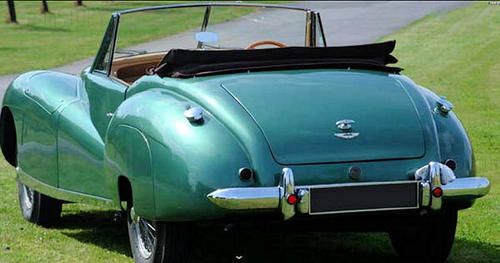