The DBRS9 features several modifications to the standard DB9. With developments including a full race specification roll-cage and a tuned version of the 5.9L V12 engine to bring output up to 550 bhp (410 kW; 558 PS). Other modifications include carbon fiber body panels (exc roof), polycarbonate side and rear windows and a stripped out interior in order to drop weight by 480 kg (1,100 lb). With these enhancements bringing the DBRS9's power output up to 430 bhp/tonne.

The car also features uprated suspension with a lowered ride height and stiffened racing springs. The DBRS9 has also been fitted with a close-ratio racing gearbox in either 6-speed fully manual or an upgraded sequential manual form.

The DBRS9 is open to customers through Aston Martin Racing and Prodrive at a price of approximately £175,000 without optional extras and taxes. The car is a bridge between the highly expensive, fully race specification GT1 Aston Martin DBR9 and the standard DB9 road car.

While the DBR9 was designed to be used by large teams participating in international motorsport, specifically in the FIA GT Championship and GT1 class at the 24 Hours of Le Mans, the DBRS9 was intended to be raced by teams in lower level GT racing, mainly the FIA GT3 class and some national and international GT series such as the British GT Championship.

BMS continued with the DBRS9 in the 2007 FIA GT3 Championship, alongside French team Hexis Racing and its associate of Racing for Belgium (BEL). BMS finished second in the Team Championship.

For the 2008 FIA GT3 Championship, Brixia Racing (I) took over BMS Scuderia Italia's operation. Hexis Racing continued in the FIA GT3 class with the DBRS9 and finished second in both Driver's and Team Championship.

In the 2009 FIA GT3 Championship, both Brixia Racing and Hexis Racing stayed with the Aston Martin DBRS9, with Hexis racing winning the night race at Adria.

In the 2008 ADAC GT Masters series, Hexis Racing finished a full season with DBRS9s and finished 3rd overall in the Team Championship.

Racing for Belgium and Phoenix Racing

In 2007 Racing for Belgium (BEL) and Phoenix Racing competed with several Aston Martin DBRS9s in the ADAC GT Masters.

At the 2007 24 Hours Nürburgring, the DBRS9 of Team Phoenix led the race in the early stages, but the engine failed on Sunday.

In the 2009 Belgian GT race, Barwell Motorsport (GB) competed with their DBRS9 with sponsorship from Aston Martin Brussels.

In 2008, 22GTRacing and Cadena Motorsport took over with the British GT DBRS9s but did not have a very successfully season.

In 2009, Barwell Motorsport joined force with Beechdean Motorsport and got back to British GT with a Barwell-Beechdean Aston Martin DBRS9. 22GT Racing continued competing with their DBRS9. 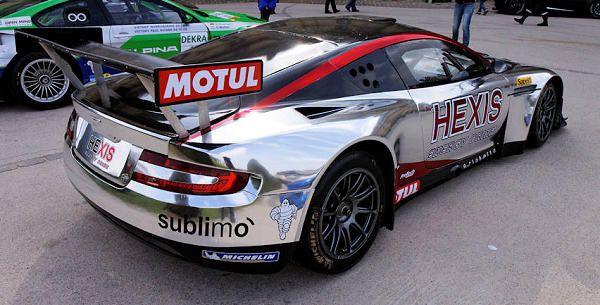