The Aston Martin AMR1 was a Group C formula racing car developed in 1989 for car manufacturer Aston Martin. It participated in the 1989 World Sports Prototype Championship and 1989 24 Hours of Le Mans.

Following Aston Martin's racing efforts as an engine supplier for Nimrod Racing and EMKA Racing in the early 1980s, it was decided that Aston Martin would attempt to create their own car for the World Sports Prototype Championship. Thus in late 1987 a partnership between Aston Martin and Scottish racing firm Ecurie Ecosse would be formed, creating a new company known as Proteus Technology Ltd. (Protech). The team would develop and run the AMR1 project, competing for the first time during the 1989 season.

Richard Williams was named as the team's manager. With him, Max Boxstrom would be the lead designer and Reeves Callaway, of Callaway Cars Incorporated, would build the engine. The chassis and bodywork designed by Boxstrom would be built by British firm Courtaulds. For the engine, Callaway would use 5.3L V8 units from the newly launched Aston Martin Virage, ending up with a 600 hp (450 kW) 6.0L engine known as the RDP87. With this combination, a total of five AMR1 chassis would be finished in early 1989.

With AMR1/01 completed, testing began in preparation for the first race at Suzuka Circuit in Japan. Unfortunately, AMR1/01 was involved in an accident during testing at Donington Park and was damaged beyond repair. Thus Aston Martin was forced to skip the first round, incurring a $250,000 fine by FIA's newly amended rule which required C1 cars to enter all round of the season and instead premiered chassis AMR1/01 at Dijon-Prenois, where it finished a disappointing 17th.

Although not part of the World Sports Prototype Championship in 1989, Aston Martin next turned to the 24 Hours of Le Mans. Two cars were entered, chassis #01 and #03. The cars unfortunately were underpowered in comparison to their competitors, qualifying 32nd and 40th in a field of 56 cars. During the race itself, the cars were able to run in the mid-pack before AMR1/03 suffered electrical problems and was forced to retire during the first half of the race. AMR1/01 was able to continue on, was able to finish in 11th place overall.

Due to a lack of time between Le Mans and the 3rd round of the World Sports Prototype Championship, Aston Martin decided to skip it, returning instead at Brands Hatch where AMR1/04 took home an exciting 4th place finish in front of the British crowd, then following it up with an 8th place finish at the Nürburgring.

For the 6th round of the year, the World Sports Prototype Championship again returned to British soil. Aston Martin therefore decided to run two AMR1s at Donington Park, debuting newly built chassis #05. The two cars were able to finish 6th and 7th. Both cars raced again at Circuit de Spa-Francorchamps where Aston Martin suffered their only other failure to finish in the season, chassis #04 having suffered engine failure. However, chassis #05, which had now been upgraded with an even more powerful 720+ bhp, Version II 6.3L V8, was able to finish a respectable 7th. For the final round in Mexico, Aston Martin decided to take only chassis #05, where they finished 8th.

Ending the season, Aston Martin had finished 6th in the Teams Championship, behind the factory Mercedes-Benz, Porsche, Jaguar, and Nissan teams, although they were able to defeat the Toyota team. 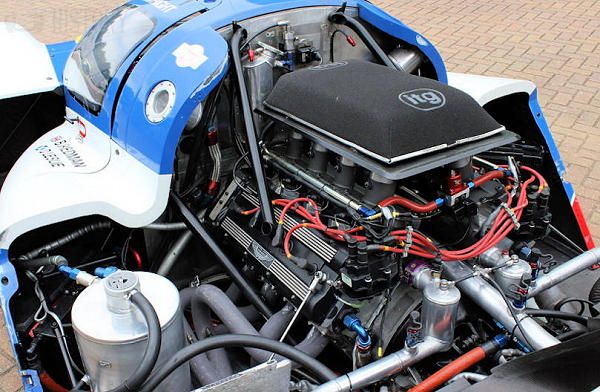 At the time of the end of the 1989 season, Protech was already beginning development of the AMR2 for 1990. With the intention for this car to race alongside another two AMR1's in the 1990 24 Hours of Le Mans. The AMR2 combined the chassis of the AMR1, a newer and more powerful 6.3L Version III V8, and an evolved, more aerodynamic body design. The AMR2 was promised to be faster in a straight line then the AMR1 (with a predicted top speed of 230+ mph), a problem which had greatly hindered AMR1 at Le Mans.

However Protech became bankrupt and was forced to close in February 1990 before the chassis AMR2/06 could be completed. AMR2/06 was later built up from left over parts and fitted with an AMR1 body. Aesthetically AMR2/06 looks exactly the same as an AMR1 even with the same Mobil 1 livery.

Shortly before closure of Protech, plans for another racing car were put in place. For a 1991 Aston Martin AMR3, this time to be designed by Tony Southgate. But Aston Martin were forced to drop out of motor racing due to the economic instability of the company at the time. It would be the last racing car produced by Aston Martin for fifteen years until the launch of the DBR9 in 2005.

A total of five AMR1 chassis were built.

AMR1/01 is now owned by the Aston Martin Heritage Trust.

AMR1/04 was the first AMR1 to reach auction, selling at a Brooks (now Bonhams)/Aston Martin Lagonda auction in 2000. The car sold for £133,500. Currently AMR1/04 is used in the Historic Sportscar Racing series in North America.

AMR1/05 is currently raced in Europe by owner Paul Whight and run by Cadena Motorsport.