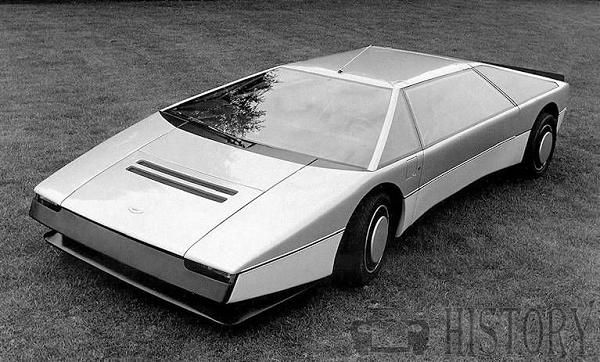 The Aston Martin Bulldog, styled by William Towns, was a one-off testbed vehicle produced by Aston Martin in 1979.

Originally, it had been intended to be a limited run of about 25. The code name for the project was DP K9, named after a Doctor Who character. It was built in the UK, but is a left-hand-drive car. It is very low at 43 inches (1.1 m) high, and sharp, distinctive Trapezium shaped design, features centre-mounted five hidden headlamps and gull-wing doors. The interior uses digital instrumentation and the rear view is delivered via a television monitor mounted on the centre console. The Bulldog was powered by a 5.3L twin-turbo V8 delivering 700 bhp (522 kW – other source claims 600 bhp/477 kW) maximum power and 69 kg/mm (500 ft・lb/677 Nm) maximum torque.

The first test drive of the Bulldog came in late 1979 and was a great success. The Bulldog achieved a verified top speed of 191 mph (307 km/h), but the theoretical top speed is estimated at 237 mph (381 km/h). The car was officially launched on 27 March 1980 at the Bell Hotel at Aston Clinton. After the development programme was over, Aston Martin sold the only Bulldog to the highest bidder for about £130,000.

The Bulldog spent some time in the United States, but has recently been offered for sale in Britain. It was now green, compared to original exterior colours of silver and light grey. The interior has also been changed from the original dark brown and black to light tan. 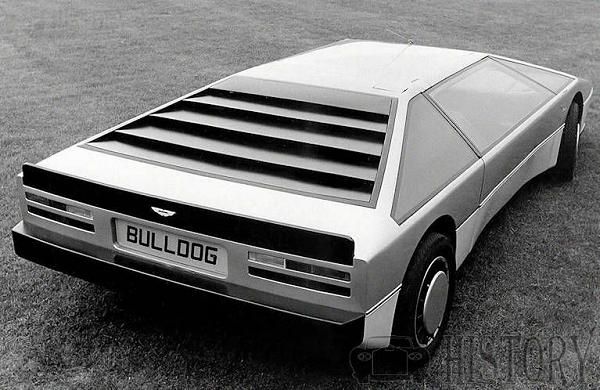