The modern Aston Martin DBS is a high performance GT sports car version of the DB9 from the UK manufacturer Aston Martin. Aston has used the DBS name once before on their 1967–72 grand tourer coupe. The modern car replaces the 2004 Vanquish S as the flagship of the marque.

It was officially unveiled at the 2007 Pebble Beach Concours d'Elegance on 16 August 2007, which featured a brand new exterior colour, a graphite grey with a blue tint which has been dubbed "Casino Ice". Delivery began on 2008 Q1.

The car is built in Gaydon, Warwickshire. Its engine is built at the Aston Martin engine plant in Cologne, Germany.

The DBS is equipped with 5935 cc V12 engine with four valves per cylinder. The same engine is also used in the DBR9 and DBRS9 racing cars albeit with extensive modifications. The engine of the DBS produces 510 horsepower (380 kW) at 6500 rpm and 570 N·m (420 lb·ft) of torque @ 5750 rpm with a compression ratio of 10.9:1. The engine also includes an active bypass valve which above 5500 rpm opens and lets more air into the engine resulting in increased performance and propels the car from 0-62 mph in 4.3 seconds and has a maximum speed of 191 mph (307 km/h) and 183 mph (295 km/h) with TOUCHTRONIC 2’ transmission. In 2007, the British motoring show Top Gear sent the DBS around their Top Gear test track seconds faster than its predecessor the Vanquish S, and a second faster than the comparable Bentley Continental Supersports.

Aston Martin uses the same VH (vertical horizontal) structure as with the DB9, which provides strength and rigidity to the whole car. Thanks to the structure, 85% of the weight of the car is kept between the wheelbase, which results in increased handling, responsiveness and feel during tight cornering.

Aston Martin has also developed an Adaptive Damping System, or ADS, which alters the suspension in order for the car to cope with the driver's desires and road/weather conditions. When turned on, the ADS automatically alters the suspension settings to ensure the driver has high levels of control at all times. Apart from the suspension getting stiffer, throttle and braking response is increased and steering is sharpened.

The DBS is fitted with Pirelli P-Zero tyres developed especially for the car, along with lightweight, aluminium 20" wheels.

The interior of a DBS is a blend of carbon fibre, alcantara leather, wood, stainless steel and aluminium surfaces. The seats are made from semi-aniline and Alcantara leather and both bear the DBS signature with an optional 2+2 seating configuration. The door panels are carbon fibre and the fascia is, as standard, matrix alloy and iridium silver centre console or, as an optional extra, piano black fascia and centre console. To achieve even greater weight savings, the carpet has a special lightweight weave. The car is started by means of the "Emotion Control Unit", which was initially developed especially for the DBS but as of 2008 is available for the DB9 and V8 Vantage as well. The key is made from stainless steel and glass and is inserted into a special hole in the dashboard.

Bang & Olufsen has developed a 1000 watt sound system for the DBS which consists of 13 speakers located in 10 different locations throughout the cabin with an integrated Apple iPod connector. 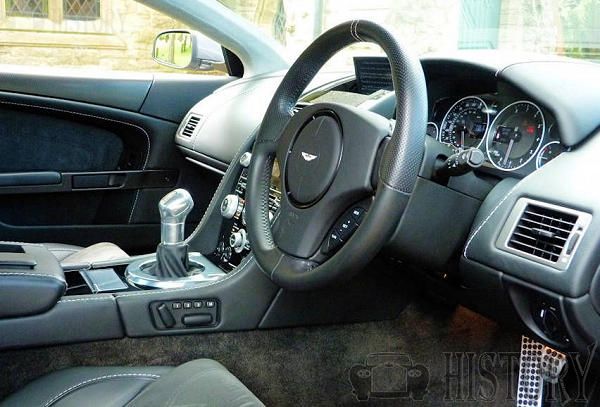 Aston Martin announced on its website and Facebook page in February 2009 that the DBS Volante would be unveiled at the Geneva Motor Show on 3 March 2009. The convertible version was introduced in August at the 2009 Concours d'Elegance at Pebble Beach, California. The roof is electronically controlled by a button in the center console and can be fully gone in 14 seconds after the press of the button. The roof can also be opened or closed while moving but vehicle speed must not exceed 30 mph (48 km/h). Apart from the roof, changes include a new wheel design available for both the coupe and volante versions and 2+2 seating configuration also available for both versions.

As of Q3 2010, Aston Martin has released 2 special editions of the DBS. One is the "Carbon Black" edition which is available only for the DBS and the V12 Vantage models, and the other is the "UB-2010 Limited Edition" which is available for the both the DBS Coupe and the DBS Volante versions.

The "Carbon Black" edition is a package which includes unique carbon black paint job (as well as orange and grey), Touchtronic gearbox, obsidian black or orange interior and lightweight seats.

The "UB-2010" edition is named after Dr. Ulrich Bez, CEO of Aston Martin Lagonda Limited and it commemorates the 10th year of Dr. Bez as CEO. This edition is limited to only 20 coupes and 20 convertibles. This edition comes with the Touchtronic gearbox or the manual upon request, azurite black exterior color, blue brake calipers and a bronze-colored interior. 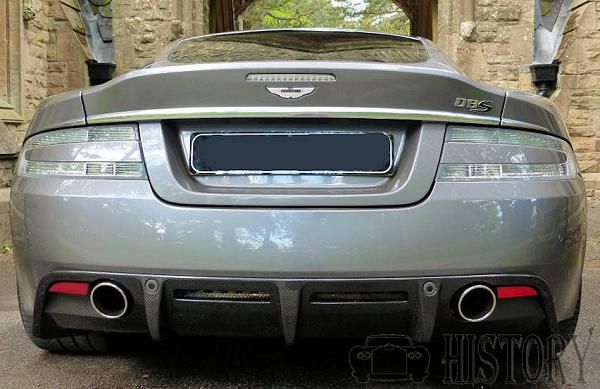 The DBS was first seen in the 2006 James Bond film Casino Royale, the first film in which Bond was played by Daniel Craig, as a result of a product placement deal with Aston Martin's parent company at the time, Ford.

Although the company sold over 90% of Aston Martin Lagonda Limited in 2007, the DBS returned for the pre-credits car chase around Lake Garda in the 2008 Bond film Quantum of Solace. 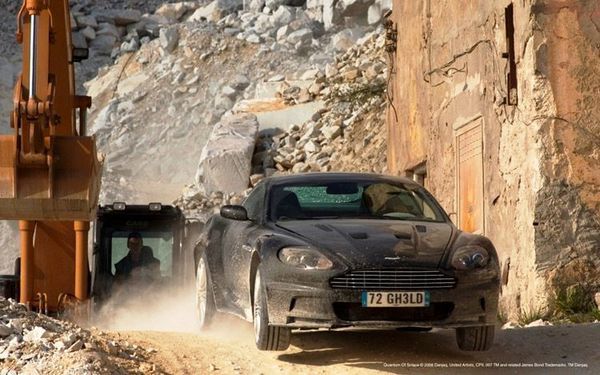