When compared to the preceding V8, the design was fresh and more modern. It looked more like a Lagonda than the V8 it replaced. Indeed, the chassis was an evolution of the Lagonda's, with a de Dion tube rear suspension, located by triangulated radius rods and a Watts linkage, and a double wishbone unit at the front. To cut costs, many of the less-important pieces came from other companies, as had been the case for many an Aston past. The sleek headlights and taillights were Audi 200 and Volkswagen Scirocco units, respectively, while General Motors, Jaguar, and Ford provided the steering column, climate control panel, and dash switches. In fact, Ford had purchased Aston Martin and Jaguar shortly before the Virage debuted.

The five-speed ZF manual was a fairly rare option, only fitted to about fifty Virages. The more popular automatic option was Chrysler's three-speed Torqueflite transmission. For 1993 the three-speed was replaced by a four-speed automatic unit. The six-speed manual from the Vantage also became optional late in the Virage's production run. 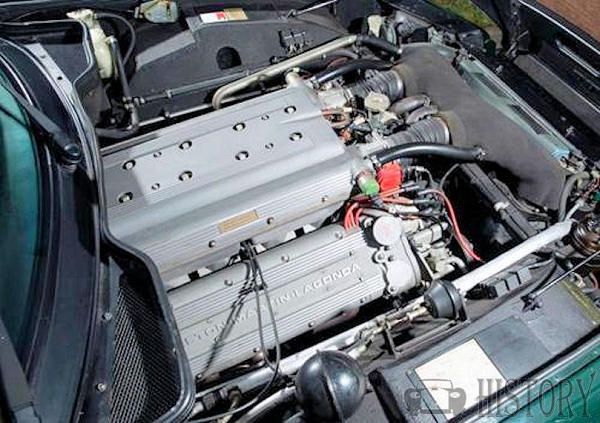 Other changes included 362 mm (14 in) ventilated disc brakes, the largest used in a passenger car until the Bentley Continental GT, and 18 in (457 mm) wheels. Visually, the 6.3 had wide flared bumpers, low sills and air dams, and side air vents.

In true British tradition, a shooting brake (estate) version of the Virage was offered in extremely limited numbers. A three-door four-seater, it debuted at the March 1992 Geneva Motor Show. Unlike prior Aston Shooting Brakes, however, the Virage was produced in-house by the company's Works Service, with a total of only four constructed. The price new was GB£165,000. Two of the cars retained Virage chassis numbers, while two received the standalone "DP/2099" chassis number.

Another rare Works Service car is the Lagonda Saloon. Only a handful of these long-wheelbase four-door Virages were built as a special customer order, reviving Aston Martin's long-dormant second marque. Introduced in 1994, it was made by the Aston Martin Works Service with a 12-inch (30 cm) chassis extension, although two were ordered with an 18-inch (460 mm) extension. The name refers to the four-door Aston Martin Lagonda. The Lagonda Virage cost about GB£250,000 and only eight or nine were made, with some being conversions of regular Virages.

The five-door Lagonda Virage Shooting Brake debuted at the same time as the Lagonda Virage. It was made by the Aston Martin Works Service in only one or two examples, and has been spotted bearing "Vacances" badging at the rear.