The Aston Martin DB6 is a grand tourer made by British car manufacturer Aston Martin. Produced from September 1965 to January 1971, the DB6 had the longest production run up to that date of any Aston Martin model. The DB6 succeeded the popular Aston Martin DB5 and featured improved aerodynamics and specification over its predecessor.

After Aston Martin rejected proposals for a replacement for its DB5 from Touring of Milan, the decision was made to focus on their own development car, registered 4 YMC. Wind tunnel testing, begun in February 1965, showed development was necessary to counteract a tendency toward aerodynamic lift [a result of the fastback styling] causing reduced rear-wheel traction at high speed. Final development phases relied upon DB5 chassis, suitably lengthened and titled MP 219, with rear lip-spoiler and abbreviated Kammback tail Aston Martin previously incorporated in sports-racing prototypes. The decision was made to produce MP 219 as the Aston Martin DB6 although the prototype de Dion rear axle was rejected, Aston's soldiering on with its well-located live-axle configuration reducing time to market, cost and complexity.

Introduced at the 1965 London Motor Show, the DB6 was already a dated design notable as the first model engineered following a factory relocate from Feltham to Newport Pagnell. The DB6 shares a large resemblance to its predecessor, the DB5; with the most noticeable differences being its wheelbase, side profile, split front and rear bumpers and rear panels incorporating the Kammback tail rear end. The tail, combined with the relocated rear-axle and the 3.75-inch (95 mm) lengthened wheelbase, provide more stability at high speed. Though fashionable-the rear-end Kamm-styled design was similar to the Ferrari 250-it did not prove popular with conservative, tradition oriented Aston clientele when the DB6 was introduced. Performance was satisfactory: road-tests of the day observed top speed of the Vantage model between 145 mph to 148 mph, with intrepid and fearless John Bolster aboard a Vantage spec DB6 reaching a two-way average of 152 mph.

The DB6 continued with then high-tech Armstrong Selectaride cockpit-adjustable rear shock absorbers as available on the DB5. Other highlights include adopting front-door quarter windows, an oil-cooler air scoop low on the front valance, quarter-bumpers at each corner, revised tail-lamp clusters; additionally the spoiler with the luggage capacity affected overall proportions of the DB6, to an increased length approximately two inches.

Another major change from the DB5 to DB6 was abandonment of the full superleggera construction technique patented by coachbuilders/stylist Touring of Milan. For later DB6's construction, the more common body-on-platform technique was used; this was primarily due to the extended rear requiring a stronger and more rigid design using folding sheet metal frames. Surprisingly the modifications combined to add only seventeen pounds weight compared to the DB5.

The DB6 is powered by the 3,995 cc twin-overhead camshaft (DOHC), in-line six-cylinder Aston Martin engine designed by the legendary Tadek Marek. The engine, continued with its triple SU carb setup producing 282 bhp (210 kW; 286 PS) at 5,500 rpm; the Vantage engine option is quoted at 325 bhp (242 kW; 330 PS) against the 314 bhp (234 kW; 318 PS) of the DB5. Although the weight of the DB6 was approximately 17 lb (7.7 kg) heavier than its predecessor, the stability at high speed, added luggage capacity and comforts for passengers in this grand tourer more than offset any imperceptible loss in performance caused by additional weight. The rear suspension used helical coil springs with ride control that was adjustable from inside the car. 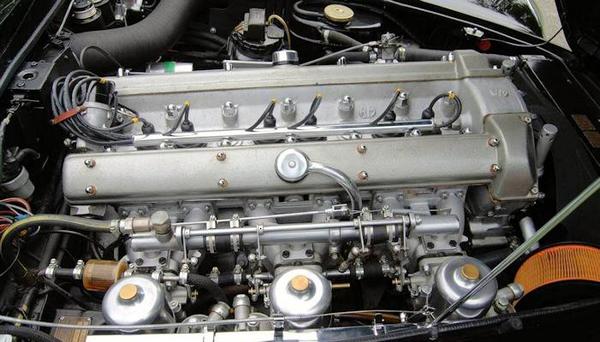 The DB6 Mark II was announced on 21 August 1969, identified by distinct flares on front and rear wheel arches and wider tyres on 1/2" wider wheels. Available as an optional extra for the Mark II was AE Brico electronic fuel-injection combined with the higher compression ratio cylinder head. The Mark II edition shared many parts with the then-new DBS.

As with previous Aston Martin models, a high-power DB6 Vantage was offered. It was equipped with three Weber carburetors and higher compression ratio cylinder head.

A convertible body style was also offered, as per Aston tradition, called the DB6 Volante, this was first introduced at the 1966 London Motor Show. The DB6 Volante preceded the earlier (1965–1966) Volantes which were built on the last of the DB5 chassis' and were known as "short chassis" Volantes. Of the later DB6 Volantes just 140 were built, including 29 high-output Vantage Volante versions, highly prized by collectors.

Charles, Prince of Wales, owns a DB6 Volante MkII that has been converted to run on bioethanol. The car was given to him by his mother on his 21st birthday. 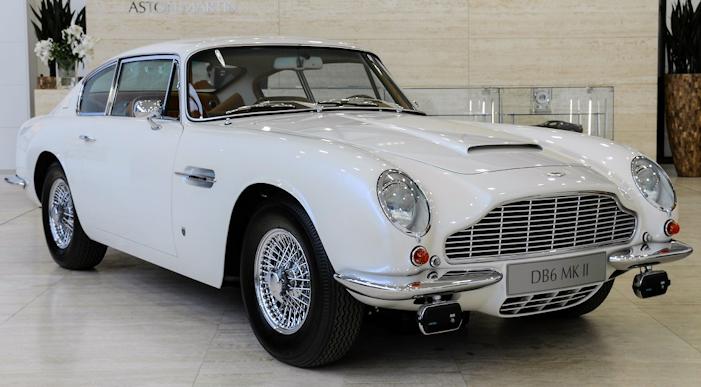 A total of six-seven DB6 Shooting-brakes were produced by British coachbuilder Harold Radford. The engine options (282 and 325 hp) were the same as for the DB6 Saloon.