The DB4 is a sports car sold by Aston Martin from 1958 until 1963. It was an entirely different car from the DB Mark III it replaced, though the 3.7 L engine was externally visually related to the 2.9 L unit found in that car. The DB4's unique design and performance would later form the basis for future Aston Martin classics, such as the DB4 GT Zagato, the Lagonda Rapide 4-door saloon, and its ultimate replacement the Aston Martin DB5.

The lightweight superleggera (tube-frame) body was designed by Carrozzeria Touring in Milan, and its Continental looks caused a sensation on its unveiling at the 1958 London Motor Show. Although the design and construction techniques were Italian, the DB4 was the first Aston to be built at the company's Newport Pagnell works in Buckinghamshire, England.

The 3.7 L (3670 cc/223 in³) engine, designed by Tadek Marek, was a double overhead cam straight-6, with cylinder head and block of cast R.R.50 aluminium alloy. The engine was prone to overheating initially, but the 240 hp (179 kW)produced by the twin-SU carburettor version made buyers forgive this unfortunate trait. Servo assisted Disc brakes were fitted all around, with early 11.5 in (292 mm) Dunlops being replaced by Girlings. The independent front suspension used ball-jointed wishbones and coil springs and the live rear axle also using coils springs with location by a Watt's linkage. Rack and pinion steering was used. There was a choice of final drive ratios, the normal one for British and European use was 3.54:1, the United States usually got a 3.77:1 and a 3.31:1 was also available for customers wanting a car with an especially high top speed. 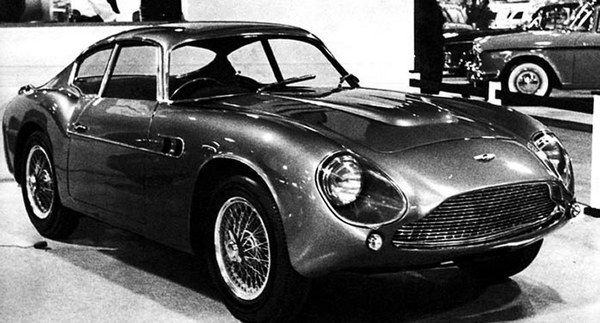 There were five "series" of DB4s, with the most visible changes being the addition of window frames in Series II and the adoption of a barred (rather than eggcrate) grille in Series IV. The Series III cars differed from the earlier ones in having taillights consisting of three small lamps mounted on a chrome backing plate. Earlier cars have single-piece units and the last Series V cars of September 1962 have similar taillights but recessed. The Series V also has a taller and longer body to provide more interior space, though the diameter of the wheels was reduced to keep the overall height the same. The front of the Series V usually was of the more aerodynamic style as already used on the Vantage and GT models, a style that was later carried over to the DB5 cars.

A convertible was introduced in 1962. It featured in-house styling similar to the Touring saloon, and an extremely rare factory hardtop was also available. In total, 70 DB4 convertibles were made from a total DB4 production run of 1,110 cars. 30 of these were Series IV, with the remaining 40 belonging to the Series V. 32 of the total convertibles built (11 and 21 of the different series respectively) were equipped with the more powerful Vantage engine.Top speed for the regular version is about 136 mph.

The DB4 GT was a special lightweight, high-performance version of the DB4. Introduced in September 1959, the GT's featured enclosed headlights and a thinner aluminium skin for lighter weight. The wheelbase was also reduced in comparison to the standard car, which resulted in many cars not being fitted with rear seats.

Seventy-five GTs were built with this body style. Nineteen more were modified by the Zagato works in Italy into DB4 GT Zagatos, with plain oval grilles, sans the stock GT's tail fins, and a smoothed out rear end. A single car was also styled by Bertone and dubbed the Bertone Jet.

With the introduction of the Series IV in 1961, a high-performance DB4 Vantage was also offered. It featured three SU carbs and special cylinder heads, increasing power to 266 hp (198 kW). Most Vantage models also used the enclosed headlights of the DB4 GT as well. In all, there were 136 saloons and 32 convertibles with the Vantage engine.

A tiny number of non-GT DB4s used the GT's more-powerful engine. This combination is often called a Vantage GT, though not all included the Vantage package and none was technically a GT. Three Series III, five Series IV, and six Series V cars have this unusual combination of body and engine for a total of 14.