The Star Sapphire saloon was announced on 17 October 1958 and production continued through to the summer of 1960 It retained the previous model's commanding driving position. Though little changed externally, the radiator grille no longer rose to the top of the bonnet, many refinements were incorporated.

The six-cylinder engine was enlarged more than 16% to 3,990 cc with larger twin Stromberg carburettors as standard and power output increased to 165 bhp (167 hp, 123 kW), or [DIN] 145 bhp (147 hp, 108 kW). Perhaps more important was an increase of nearly 30% in torque at 50 m.p.h. Big end and main bearings were now made of lead indium and a vibration damper fitted to the nose of the crankshaft. The compression ratio was raised to 7.5 to 1. The car could now lap the Lindley high speed track at 104 m.p.h.

Various suspension modifications had been carried out. Servo-assisted 12 in (305 mm) Girling disc brakes were now installed on the front wheels and Burman recirculating ball power steering was standardised with a turning circle reduced by 4'6". A BorgWarner type DG automatic gearbox was fitted which incorporated a lever on the facia to hold intermediate gear at 35, 45, 55, and 65 m.p.h.

Door hinges were now concealed and the front doors now hinged at their leading edge. There was an independent heater for the rear passengers and demisting slots for the rear window. All features were standard, the provision of alternatives being believed to lead to an unsatisfactory compromise.

902 saloons were produced, as well as 77 long-wheelbase cars, 73 of which were built as limousines (including 2 prototypes). The limousine version was made in 1960 only and had a single-carburettor engine and manual gearbox (the automatic gearbox was fitted to 12 examples). The remaining 4 chassis were used for 3 hearses and an ambulance. 980 Star Sapphires were produced.

The Star Sapphire won the £4,000 four-door coachwork class at the 1958 Earls Court Motor Show ahead of a Princess limousine and a Jaguar Mark IX. 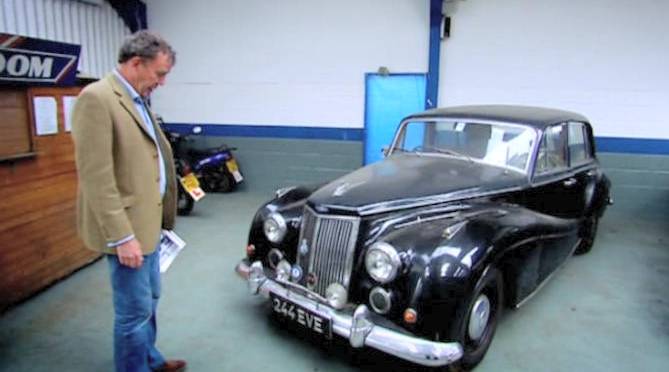