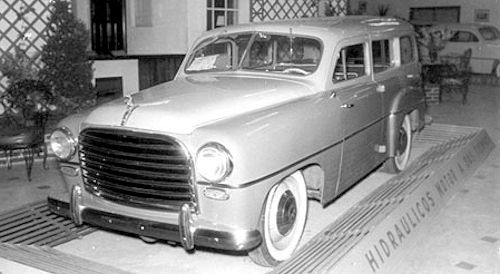 Casa Fehling SRL was an Argentine company in the field of automobiles .

The company was based in Buenos Aires and was headed by a German immigrant. It imported vehicles from Europe as far back as 1895 .

1956 began there own production of automobiles. The brand name was Jefe , too German boss. In the same year ended the production.

IAME , who also produced the Justicialista , delivered the chassis . The base formed a box frame .

The choice was coupe and two-door station wagon .was offered in two body versions: Sedan two doors and Rural. The latter, with the option of two or three doors . Both versions of the Rural included rear opening through a gate of two independent leaves that were opened by hinges. The manufacturer announced a sale price to the public of the Rural versions of 86,000 pesos.

The cars "Boss" were based on the chassis and the mechanics of the Institec produced by IAME, including the design of their bodies presented a similar appearance to the cars of the state factory.

They were equipped with a two-stroke engine from DKW with 76 mm bore , 76 mm stroke , 700 cc displacement and 24  hp power two cylinders and 700 cc, which developed 24 hp and was arranged longitudinally on the front axle. Its consumption was 7 liters of fuel per hundred kilometers, at an average speed of 90/100 km / h.

The transmission was rear with manual gearbox with three forward and reverse speeds. The drum, rear and front brakes were hydraulically operated.

The prototypes were exhibited during the first months of 1956 in the new headquarters of the company on Avenida Córdoba 3000 in the City of Buenos Aires, but the "Boss" cars never came to be produced in quantity.