The XR-400 was a fully operational concept car. A "sporty" youth-oriented convertible was built in 1962 by the Budd Company, an independent body builder in Detroit, Michigan, for evaluation by the fourth largest U.S. automaker at the time, American Motors Corporation (AMC).The phrase “ahead of its time” applies to this proposed vehicle.

The XR-400 was developed and constructed by the Automotive Division of the Budd Company. The "R" stood for Rambler.

The objective of this car was to entice AMC to expand into a new market segment with a low-cost Rambler-based "sports convertible." The Budd Company was a long-time supplier of tooling, parts, and bodies to automakers. Budd also worked with Nash Motors, AMC's predecessor company, to develop the first monocoque (unitized) automobile body in 1940.

By enticing AMC with this concept, Budd’s already existing business with AMC would increase. It planned to supply bodies and major sub-assemblies for the production version of this new car. Budd estimated that the new model could be available for public sale by October 1963, six months ahead of the Ford Mustang.

The XR-400 was built on a shortened two-door 1962 Ambassador chassis. To keep costs down, Budd engineers kept front of the unit body with the suspension in the same location. The engine's position was lowered by two inches (51 mm) with new rear mounts, the radiator was lowered by 3.5-inches, the fan blades were shortened, as was the oil-filler neck. The air cleaner was relocated, the exhaust system was reshaped, and the gas tank was new.

The XR-400's long nose was accomplished by adding a second cowl section behind the original that made space for the battery. The car was styled by Budd with a rather clean and uncluttered body giving little indication of its Rambler sedan origin. A double crease in the beltline suggested a family relationship to the contemporary styling of Rambler’s large-sized cars.

The proposed model was a true 2+2 (two front bucket seats plus limited use seats for two back passengers) sleek, steel-blue convertible with a long hood and a short, stubby rear deck. The XR-400’s long 108-inch (2,743 mm) wheelbase and truncated overhangs gave it athletic proportions, while the top-up appearance suggested a close-coupled two-seater sports car. Classic sports car touches included a hood line that slopped lower than the front fenders, doors that had a dip in their top, and simulated scoops behind the front wheels.

Power for the XR-400 was supplied by a standard Ambassador two-barrel 250 hp (186 kW; 253 PS) 327 cu in (5.4 L) AMC V8 engine. The engine bay could accommodate any of AMC’s I6 or V8 engines. The transmission was an automatic (not typical of sports cars) controlled through a floor console mounted shift lever. Braking was provided by an experimental front disc brake system.

The interior used AMC’s front seats and many other hardware items. In classic sports car fashion, the driver had all controls and a full set of instruments (speedometer, tachometer, as well as gauges for fuel, water temperature, amperes, and oil pressure) that mounted directly ahead of a highly regarded three-spoke wood-rimmed Nardi (brand) steering wheel.

Budd's sales pitch to AMC included pioneering a market "presently untapped by any other manufacturer" with a car so "unlike anything else on the road it would attract widespread attention, provide your dealers with both a new profit area and morale-builder, and offer unusual advertising and sales promotion opportunities."

The experimental convertible was publicly exhibited at the 1964 meeting of the Society of Automotive Engineers (SAE). The press release stated that the concept shows how modifying Rambler Ambassadors results in:

"... A brand new type of car—one designed specifically to take over a healthy segment of the new car market presently untapped by any American manufacturer...."

Automotive press reports stated that such a new model could have appeared in AMC dealer showrooms, thus establishing a market segment at least six months before Ford's similar Mustang started the "pony car" market. Unfortunately, AMC turned down the idea.There were probably several reasons for this decision, including:

The Budd Company kept the only prototype model, but later renamed it "XR-Budd" and used it for marketing purposes. The prototype was upgraded with chrome plated reverse wheels with exposed lug nuts, but the original version had stamped steel wheels with full hubcaps. The car is now at The Henry Ford Museum and displayed at major classic car shows.

There are two final ironies to the XR-400 story.

Through imagination it is possible to reweave history just by thinking about the "What If?" and "suppose, for example, that the sporty compact 'ponycar,' that wildly successful 1960s phenomenon, had come not from Ford but tiny American Motors?" 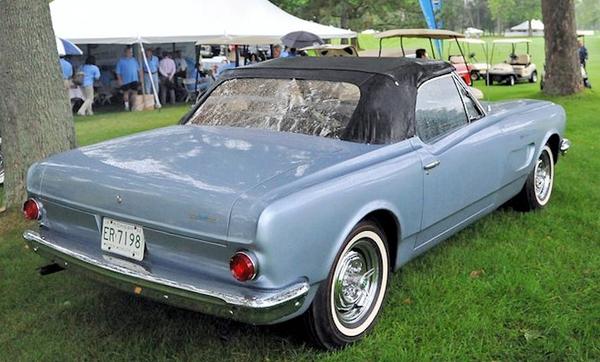