The Rambler Rebel is an automobile that was produced by the American Motors Corporation (AMC) of Kenosha, Wisconsin for the 1957–1960 model years, as well as again for 1966 and 1967.

Introduced as a stand alone model in one body style, the 1957 Rambler Rebel is credited for being the first factory-produced intermediate-sized high-performance car. This later became known as the muscle car market segment. It was also to be among the earliest production cars equipped with electronic fuel injection.

The second and third generations essentially became the equivalent Rambler Six models, but equipped with a V8 engine. The Rebel nameplate was reintroduced in 1966 as the top-line intermediate-sized two-door hardtop. For the 1967 model year, AMC's all-new intermediate line took the Rebel name. American Motors dropped the historic "Rambler" marque from these intermediate sized models to become the AMC Rebel starting with the 1968 model year.

The strategy of American Motors President, George W. Romney, was to avoid a head-to-head battle with the domestic Big Three automakers (General Motors, Ford, and Chrysler) by focusing AMC on cars that were smaller than the "standard" models in the marketplace. The "legacy" large-sized Nash and Hudson models were suffering from dwindling sales. The 1956 model year four-door Rambler models were completely redesigned, and in 1957, the Rambler was established as a separate marque. The Rambler Rebel debuted as a special model in the Rambler line showcasing AMC's big new V8 engine for the 1957 model year. The AMC engine evolved because component sharing relationships with Packard were terminated and AMC developed and manufactured a V8 engine in-house.

American Motors surprised most observers with the December 1956 introduction of the Rambler Rebel – "a veritable supercar".The new 1957 model debuted as a high-performance vehicle that combined AMC's lightweight 108-inch (2,700 mm) wheelbase Rambler four-door hardtop body with AMC's newly introduced 327 cu in (5.4 L) V8 engine This made it the first-time that a large block V8 was installed in a mid-size car in the post-World War II marketplace. General Motors, Ford, and Chrysler offered no intermediate-sized cars whatsoever.

Although AMC was best known for their reliable economy cars, this special model came with a bigger engine than anything found at Chevrolet, Ford, or Plymouth—the Rambler's most popular competitors at that time. The Rebel's US$2,786 MSRP base price was economical for the amount of power provided. It was the fastest stock American sedan, according to Motor Trend.

All Rebels came with a manual (with overdrive unit) or an automatic transmission, as well as other performance enhancements such as a dual exhaust system, heavy-duty suspension with Gabriel (brand) shock absorbers, and front sway bar. The Rebel was capable of 0 to 60 mph (0-97  km/h) acceleration in just 7.5 seconds with its standard 255 hp (190.2 kW) carbureted engine. The car's light monocoque (unibody) construction afforded a power-to-weight ratio of about 13 pounds per horsepower, a better ratio than other 1957 model year automobiles and a contrast to Volkswagen's 45.

The Rebel's engine also differed from the 327s installed in the 1957 Ambassador and Hudson Hornet models because it used mechanical valve lifters and a higher compression ratio. Since both engines were rated at 255 hp, it is probable that the Rebel's was underrated.

Power steering and power drum brakes were also standard, as on all Rambler Custom models. The car was available only in silver metallic paint accented with gold anodized aluminum inserts along the sides. Padded dashboards and visors, rear child proof door locks, and seat belts were all optional. A total of 1,500 Rebels were produced in 1957. A/C was a $345 option.

The Rebel is considered to be a precursor of the muscle cars (rear-wheel drive mid-size cars with a powerful V8 engines and special trims) that became so popular in the 1960s. It also foretold that muscle-type performance would be included among AMC's models.

The Bendix "Electrojector" electronic fuel injection (EFI) was to be optional on the 1957 Rambler Rebel with a flashy introduction at the Daytona Beach Road Course trials. The Rebel's Electrojector equipped engine was rated at 288 bhp (214.8 kW). This was to have been the first mass-produced engine with a transistorized "brain box" fuel injection system. A Rambler Rebel with the optional EFI was tested by Motor Trend, and they recorded this sedan going faster from a standing start than the 1957 Chevrolet Corvette with mechanical fuel injection.

The Bendix system's public debut in December 1956 was followed by a March 1957 price bulletin listing it as a US$395 option, but because supplier difficulties, EFI Rebels would only be available after June 15. This was to have been the first production EFI engine, but Electrojector's teething problems meant only pre-production cars were so equipped: thus, very few cars so equipped were ever sold, and none were made available to the public. The Rambler's EFI was more advanced than the mechanical types then appearing on the market and the engines ran fine in warm weather, but suffered hard starting in cooler temperatures. As a result, all of the production Rebels used a four-barrel carburetor. Nevertheless, the EFI option remained in the published owner's manual. 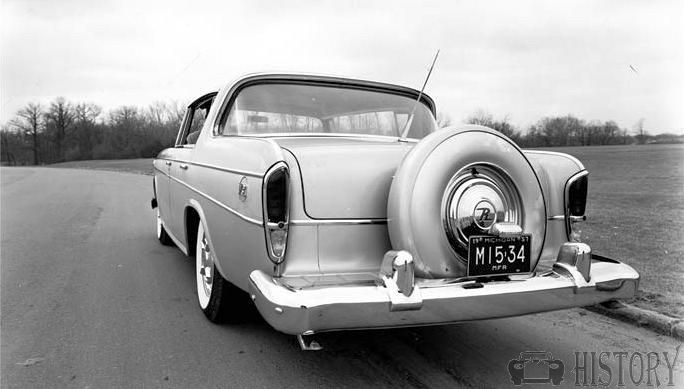