The Alpine M63 was the first racing sports car from Alpine and was developed in 1962 for sports car racing.

All around independent suspension is used, with wishbones in front, with coil Springs and telescopic shocks. The rear we have a fabricated hub carrier to which is attached lower wishbone, with an upper single rod, telescopic shock, coil springs, torque and torsion bar. The sturdy frame weighing only 95 lbs. .

The engine made by Gordini. This gives over 100 hp DIN at 7,200 rpm; with maximum torque of 72 1bs per ft at 6.000 rpm. five main bearing crank shaft furnishes a strong base. The black cast iron and the head of aluminum. two are chain driven and a compression ratio of 10 to 1 is normally used for the engine. The engine is mounted ahead of the back axle and special five-speed Hewland gear box, The M65 has disc brakes all around and the special light weight magnesium wheels are by Alpine. 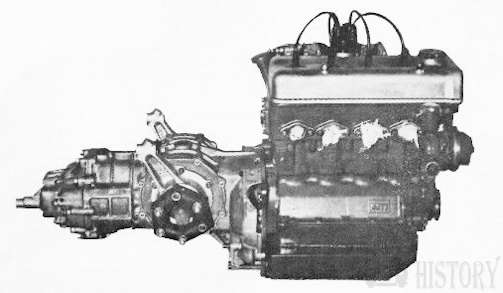 The first designs for the Alpine M63 came from Len Terry . Terry already worked for Colin Chapman in 1962 and became internationally known in the mid-1960s through the design of the Lotus 33 . Jean Rédélé contacted Chapman and Terry when, at Alpine, the idea of ​​having their own racing sports car became more and more concrete. Terry said a design work that was very similar to the Lotus 23 . However, Terry's work was still not geared to the future technical regulations of the CSI , which had already published the new framework conditions for the World Sportscar Championship races . The big goal of Alpine was the participation in the 24 Hours of Le Mans . In 1963 , the first M63 was to be launched there. Since this endurance race was a championship run of the sports car world championship, the new regulations also applied there. Although Redélé had a rough draft, but could not implement this way.

French racer Bernard Boyer brokered his friend Richard Bouleau . Boyer himself was also active as a vehicle designer in addition to his racing. Boyer constructed later, Matra - seaters and - prototypes and had a driver's contract with Alpine. Bouleau worked for Saviem in the truck development department in 1962 and had no experience in racing car construction. After initial skepticism, Rédélé Bouleau reworked the designs of Terry. Together with Boyer, he adapted the ideas of the British to the new regulations and designed the chassis.

Now the fourth designer came on the scene; Marcel Hubert . Hubert, who was later responsible for the successful Alpine prototypes of the 1970s, gave the car the aerodynamic body shape. The car had a far back-flowing tail and the engine behind the driver, making the M63 the mid-engine racing car . With 601-620 kg curb weight of the M63 was very light, but at the beginning of the 1960s, this was not uncommon in this small sports car class. The wheelbase amounted to 2400 cm. The car was powered by a 4-cylinder Gordini engine, the Amédée Gordini for the Renault R8 had developed. With only 996 cc displacement he made 95 hp (70 kW). As maximum speed, the plant gave 232 km / h.

The first car, chassis number 1701, was completed the day before the technical inspection for the Le Mans pre-tests in Dieppe and brought just before the deadline to Le Mans. The first laps with the new car drove Bernard Boyer, then works driver José Rosinski took over the actual test work. It quickly turned out that there was a problem with the too smooth steering. At the slightest steering correction on the fast straights of Circuit des 24 Heures , the car broke out and Rosinski struggled to keep the M63 in a straight line. After the end of the test drives - Rosinski drove his best lap in 4:40 minutes - the race car was revised in Dieppe. At the next test driving on Autodrome de Linas-Montlhéry gave it the finishing touches. The problems with the steering no longer appeared; the changes in the factory had achieved the desired result.Now followed by another test to be prepared for the long race at Le Mans. It was best to have a real race and Alpine announced the vehicle for the 1000 km race at the Nürburgring .

As the Nordschleife of the Nürburgring was new territory for team and factory riders, Jean Rédélé set out to find an experienced sports car driver who would strengthen the racing team in the race . The choice fell on the American Lloyd "Lucky" Casner . Casner, who ran his own racing team with Camoradi Racing , had the 1961 race on a Maserati Tipo 61won. However, Casner had hitherto driven almost exclusively displacement and high-horsepower racing cars and had to get used to the driving style with the little Alpine. He and Rosinski formed a successful duo that finished the race in eleventh place overall and celebrated the first class victory for an Alpine sports car.

For the appearance in Le Mans, the two chassis 1702 and 1703 were completed, so Alpine reported three vehicles. In the particular interest of the teams with small displacement vehicles stood there the index rating - a ratio rating for vehicles of different performance - the Alpine wanted to win necessarily. The three cars were driven by Piero Frescobaldi and René Richard , José Rosinski and the Brazilian Christian "Bino" Heins and Bernard Boyer together with Guy Verrier . The vehicle latter was the heaviest of the three M63 with a new gearbox.

The death of Christian Heins was the result of an engine failure on the Aston Martin DP214 by Bruce McLaren . Heins had already ended his racing career and was persuaded by Rédélé to come to Le Mans for a final race. He had come with his young wife and their child together. Due to the engine damage, the track was smeared just before the Mulsanne with oil. In a passage that is driven at full throttle, this was fatal. Since the marshals reacted too late, it came to three accidents in quick succession, including Roy Salvadori in the Jaguar E-Type Lightweight by Briggs Cunningham, When Heins came to the scene, the runway was strewn with wreckage. He tried to dodge at high speed and came off the track. The M63 crashed into a telegraph pole and Heins, who was trapped in the car, died in the flames.

After this accident, the result was unimportant for Alpine. Both remaining cars were eliminated during the race due to gearbox or engine damage.

This was followed by three more missions in sports car racing. Henri Grandsire and José Rosinski finished ninth and eleventh in a frame race for the 12-hour race in Reims .

For the Trophée d'Auvergne the chassis 1703 and 1704 got a new body. Richard Bouleau had simply removed the roof and had a windscreen attached to the cockpit. On the fast, but also narrow course of Clermont-Ferrand , the concept did not prove itself. After nearly five hours driving time Rosinski and Grandsire were only 13th and 15th.

The end of the year was another race at the Circuit de Charade, where again the closed M63 were driven. This time there were the first podium finishes; Grandsire finished second and Rosinski third.Also in 1964, Alpine's focus was clearly on a success at the 24 Hours of Le Mans. Dieppe has already been working on the successor to the M63, the M64 . The transitional model was the Alpine M63B . Chassis of the M63 with the aerodynamically revised body of the M64. There was a first finish at Le Mans; Roger Massonand Teodoro Zeccoli were 20th in the standings.

In 1965, this Alpine type was hardly used any more; in Le Mans Robert Bouharde and Pierre Monneret eliminated by ignition damage.