The third generation of the Alpina B10 was built as a sedan and touring based on the BMW E39 from January 1997 to October 2003.

In February 2000, Alpina presented the Alpina D10 , the first six-cylinder diesel model produced by Alpina based on the B10. The engine, a 3.0-liter biturbo with 180 kW (245 PS) and 500  Nm torque, was based on the engine of the BMW 530d.The third model generation of the B10 was built with both in-line six-cylinder and V8 engines.

The six-cylinder engines with 3.2 and 3.3 liter displacement were based on the engines of the BMW 528i and BMW 530i. In the 3.3 liter engine, the engine block was drilled out, which made it possible to increase the displacement to 3298 cm³. For this purpose, the cylinder head was machined and a modified crankshaft, as well as other pistons and camshafts were used. A modified intake system enabled a higher air throughput, and the vehicles also had a stainless steel exhaust system (Alpina-Bosal) with metal catalysts . The engine management was completely revised, which increased the output to 206 kW (280 PS).

The chassis was revised, for this purpose the vehicle was lowered with modified springs and tuned tighter with shock absorbers from Sachs. The braking system was taken over from a BMW E39 with V8 engine, later from the E39 facelift model. 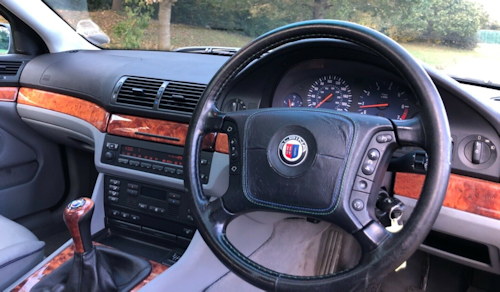