The Alfa Romeo Stelvio (Type 949) is a SUV crossover vehicle model of the Italian car manufacturer Alfa Romeo in the market segment of the sport utility vehicles , which is sold since January 2017.

Back in 2003 introduced Alfa Romeo to Kamal as a near-series concept car of an SUV on the Geneva Motor Show based on the 159 and the Brera ago (GM-Fiat Premium platform), but did not pursue the development of further ,Like the Alfa Romeo Giulia , the Stelvio is based on the Giorgio platform and is built at the Cassino plant.

Alfa Romeo officially presented the Stelvio for the first time at the LA Auto Show on 16 November 2016.  The name of the vehicle refers to the Stelvio ( Italian Stelvio ), the highest mountain pass Italy.

The Stelvio was born on the same Giorgio platform already used by the Giulia , but slightly modified and raised by 22 cm compared to the sedan, due to an increase in the travel of the suspension and increased tires; with Giulia also shares the motors and much of the mechanics , including the ' transmission shaft in carbon fiber . In addition, compared to the Giulia, it has the wheelbase increased by 2.9 cm at the rear and 5.4 cm at the front , respectively, as well as a trunk brought to a volume of 525 liters.

The weight distribution is divided 50/50 between the two axles and the aerodynamic coefficient is 0.30. To contain the weight of the vehicle, the Biscione house made extensive use of aluminum for some body components such as mudguards , bonnet , tailgate and for some mechanical parts such as suspension , brake system and engine.

The suspensions adopt a scheme called by the Milanese house AlfaLink , which is composed at the front end by a double quadrilateral scheme with semi-virtual steering axle, while at the rear there is a multilink scheme consisting of four and a half arms; this suspension scheme causes the tires to stick, at high speed conditions, perpendicular to the asphalt surface, thus increasing cornering grip and reducing understeer 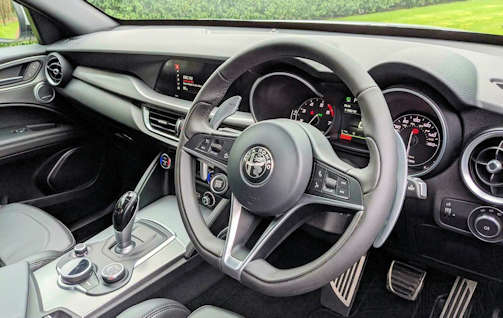 It is available in both rear-wheel drive and four-wheel drive versions with the Q4 system (equipped with a torque vectoring system ) which distributes the torque , under normal conditions, at 100% on the rear axle and only in the event of loss of adhesion 50% of the power at the front.

On request , the mechanical self-locking rear differential is available which allows more torque to be transferred to the wheel with more grip in order to optimize traction in any driving condition.

The car engines, similar to those of Giulia, are a gasoline engine turbo a four-cylinder in-line 2.0-liter that delivers 200 or 280 hp or a 2.2-liter turbo Diesel Multijet II 160, 190 or 210 hp (until June 2018 instead these engines had 150, 180 and 210 HP and were Euro 6B approved) equipped with a new 2,000 bar injection system called Injection Rate Shaping ( IRS ) . A high-performance version called Quadrifoglio is also offered , which is powered by the 2.9-liter V6 510 hp biturbo also mounted on the Giulia Quadrifoglio, which originates in the California V8 Ferrari T  . In the special Alfa Romeo Racing series, presented at the 2019 Geneva Motor Show, this engine reaches 520 HP due to the presence of an Akrapovic exhaust system. All the engines in the range from June 2018 are Euro 6D-Temp approved.

The gearbox fitted as standard on all versions is an automatic transmission with torque converter with 8 reports, produced by ZF  .