The Alfa Romeo 8C Competizione is a sports car produced by Italian automaker Alfa Romeo between 2007 and 2010. It was first presented as a concept car at the 2003 Frankfurt Motor Show and later released for sale for the 2007 model year. The name refers to the eight-cylinder (Cilindro in Italian) engine (8C) and Alfa Romeo's racing pedigree (Competizione, Italian for 'Competition'). Alfa received over 1400 orders for the 8C after the official announcement that the car would enter production. However, only 500 customers ended up with the 8C Competizione and another 500 with the 8C Spider.

The 8C Competizione was introduced at the Frankfurt Motor Show in 2003. The lines of the twin seater are meant to echo the styling of Alfas of the 1950s and 1960s, and the "Competizione" name is a reference to the 1948 6C 2500 Competizione, which competed in the 1949 and 1950 Mille Miglia race and came third both times. It was in the latter of these two races that the car was driven by Juan-Manuel Fangio and Augusto Zanardi. It won the 1950 Targa Florio. A 3.0-litre prototype was built but not produced. These 6C 2500 models were among the last vehicles with links to the pre-war cars.

During the Mondial de l'Automobile 2006, Alfa Romeo announced the production of a limited series of 500 units of the 8C Competizione. The production version is very similar to the concept; the biggest difference to the exterior being the rear-hinged hood. Other minor changes included the front lights, which used Xenon lamps, a standard wiper system, a mesh side vent, and the rims, which had a design that mimicked the cloverleaf logo. The car came standard in Alfa Red or Black. Pearl Yellow and the Special Competition Red were also available as an option. Paint upon sample colors were also available for an additional charge. Therefore, the 8Cs where produced in a wide range of colors including, white, Maserati range: Fuji White, Blue Avio, Blue Oceano, Ferrari range: Blue Pozzi, Vinaccia (Aubergine), and special Alfa Romeo historic color Grigio Nuvolari. The bodyshell is made of carbon fibre, produced by ATR Group. The carbon fibre body is fitted to a steel chassis, made by Italian company ITCA Produzione. The final assembly takes place at the Maserati factory in Modena, Italy.

An 8C Competizione was featured on the main sculpture at the 2010 Goodwood Festival of Speed. One of the two remaining Alfa Romeo P2s was also part of the display.

The car uses a modified Maserati platform and powertrain (Maserati 4200, GranTurismo) and features a Ferrari/Maserati derived 90-degree cross-plane wet sump lubricated 4.7-litre V8 assembled by Ferrari. The top engine performance figures may be summarized as a maximum power of 331 kilowatts (450 PS) at 7000 revolutions per minute, a peak torque of 480 newton metres (354 lb·ft) at 4750 rpm (80% at 2500 rpm) with an engine redline of 7500 rpm and rev limiter of 7600 rpm. The V8 engine has variable timing intake valves and compression ratio of 11.3.

The six–speed transaxle gearbox has computerized gear selection by means of levers behind the steering wheel and may be used in Manual-Normal; Manual-Sport; Automatic-Normal; Automatic-Sport and Wet modes. The gearbox can shift in 175 milliseconds when using Sport mode. The 8C also has a limited slip differential.

It is fitted with specially developed 20-inch tires: 245/35 at the front and 285/35 at the rear, fitted on perforated rims in fluid moulded aluminium. The 8C brakes have been called "phenomenal" by Road & Track magazine, with a stopping distance of 32 metres (105.0 ft), when travelling at an initial speed of 97 kilometres per hour (60 mph). The official top speed is announced to be 292 kilometres per hour (181 mph) but it might be higher, with estimations that it could be around 306 kilometres per hour (190 mph) according to the Road & Track magazine. An Alfa Romeo engineer also stated that it is faster than the announced top speed.

The possibility of an official racing version of the 8C was first hinted at in 2006, within the computer game SCAR - Squadra Corse Alfa Romeo, developed by Black Bean Software in collaboration with the automaker. A racing version of the car was included. Alfa Romeo later announced that they were preparing to race the 8C in events such as Le Mans, Daytona and Sebring. It is expected that race version chassis will be made by Dallara. As of 2009, the 8C has not been raced by a factory-sponsored team.

At the 2005 Pebble Beach Concours d'Elegance, Alfa Romeo unveiled the 8C Spider, a roadster version of the Competizione coupé. The Spider concept was built by Carrozzeria Marazzi. Production of the 8C Spider was confirmed by Sergio Marchionne on September 25, 2007. It was announced that the Spider would be built in a 500 unit production run and would cost around $227,000 (€165,000) more than the coupe version.

Alfa Romeo claims that the 8C Spider's top speed is 290 kilometres per hour (180 mph), which makes it slightly slower than the coupé version. The brakes on the Spider are Brembo carbon-ceramic units. The Spider has a two-layer electrically operated fabric roof. The windshield frame is made of carbon fibre to try to maintain a 50/50 weight distribution. 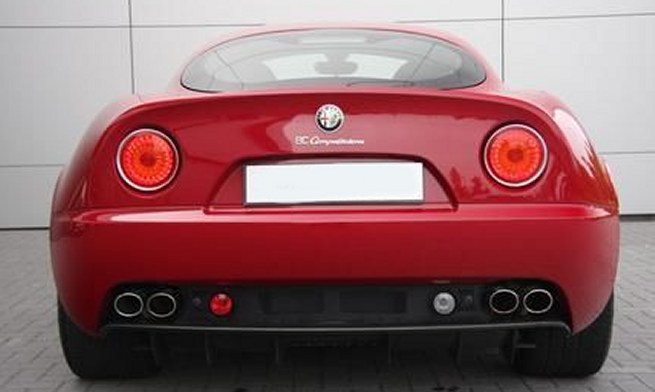