The Alfa Romeo 184T is a Formula One car which was used by the Alfa Romeo team during the 1984 and 1985 Formula One seasons. The car, which was Mario Tollentino's first F1 design, bore the colours of the team's major sponsor, Italian fashion designers Benetton.

When the 890T engine was introduced in 1983, it had comparable power to the BMW, Renault and Ferrari turbo engines which at times saw lead driver Andrea de Cesaris able to mix it with the quicker cars, while fuel was not a factor as in-race re-fuelling was allowed. By 1984 however, the 890T had been left behind on power by its rivals, while the new fuel regulations limiting cars to only 220 litres per race saw the Alfa's mostly uncompetitive in the races as the engine was notoriously hard on fuel consumption. Also, the lack of power saw both Patrese and Cheever having to push their 184T's harder just to try and keep in touch (more often than not this was a losing battle) and most of the 184T's retirements were due to the unreliability of the engine that the faster running produced, or the cars simply ran out of fuel. 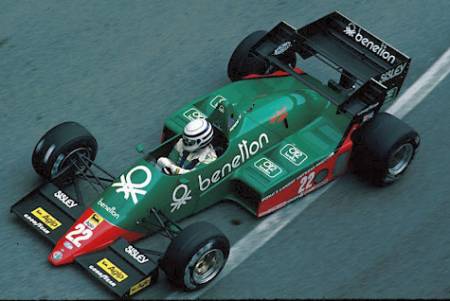